Young Maroons go down fighting in loss to Dillon 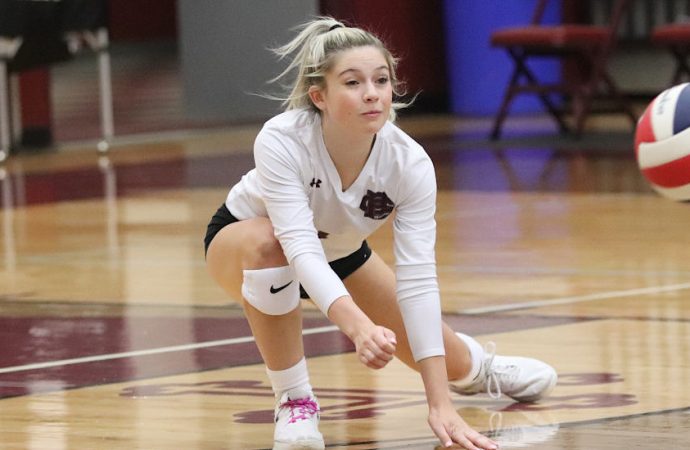 Dillon scored a volleyball sweep over Butte Central, but the Maroons got kind of a win, too.

Kind of a win.

The Butte Central effort didn’t substantially match the 25-9, 25-20, 25-22 victory produced by the Beavers in the Southwestern A Conference set-to held Thursday night in the Maroon Activities Center. Left-handed outside hitter Ainsley Shipman pounded 13 kills, including several on cross-court shots, to pace Dillon. Teammate Jordyn Walker fired four ace serves and libero Emily Matamoros scooped 13 of the Beavers’ 59 digs. Setter Lauryn Petersen put up 27 assists. The win was Dillon’s first of the season, making the Beavers 1-7 in league play and 1-8 for the year.

It was essentially a junior varsity match for the Maroons, but also an important varsity tilt. Senior libero Sophia Burton was the only Butte Central varsity player able to suit up for the match due to a two-week quarantine imposed on the Wednesday after one of the other varsity members tested positive for the coronavirus. Burton was unaffected.

As a result, though, several of the Butte Central junior varsity players made their varsity debuts Thursday night – in the starting lineup. Burton and five JV players took the floor to start the match for Butte Central and the reserves were all from the subvarsity units.

With time winding down on the season, none existed for a postponement of the match beyond the quarantine duration.

“It was very fun with a little excitement,” Butte Central head coach Becky Hancock assessed. “They really stepped up. People stepped up into some really big roles they weren’t used to. They made games out of it.

“We didn’t practice it at all (the varsity plan for playing Dillon). The girls just came out and played and I really couldn’t have asked more from them.”

Miranda Murray, left, and Brooke Badovinac of BC go up for a block as Dillon’s Ainsley Shipman hits. (Bill Foley photo)

Dillon scored the first six points of the match before the Butte Central team got on the board with a defensive point. The experienced Dillon squad, though, continued to build on its advantage, benefitting from two straight aces y Matamoros in a serving run that opened the gap to 20-7. A Shipman kill notched set point at 24-9. Evey Hansen killed the winner.

The Maroons, though, gathered themselves, and competed.

Walker whacked a couple of aces as Dillon ran ahead 4-1 in the second game. The Maroons’ Maggie Stimatz took serve with her team trailing 6-3 and didn’t give it up until the Maroons were ahead by 7-6. The rivals matched points most of the rest of the set until Dillon surged later in the set. A shot by Walker caught the net and flipped over it to fall in for a point, set point at 24-19. The Maroons scored on a Dillon shot that stayed in the net before the game ended on a Butte Central service error.

The Maroons, though, knew they could hang in and play this match. Confidence grew.

“You could really tell they were playing for all those seniors, tonight,” Hancock said.

The Beavers jumped out to a 13-7 in the third set as Shipman was relentless with her side-to-side blasts. Butte Central stayed in the contest and cut its deficit twice to two points late in the game – 21-19 and 24-22 on Dillon hitting miscues. Mia Keeley clubbed a kill just before the 21-19 mark, and the Maroons’ defense forced the Beavers into the later error. A kill by Ariel Thomas had brought on match point for the Beavers at 24-20.

Shipman’s last spike of the match, one that sizzled almost along the net from left-to-right sharply,  ended the night.

“We thought about it and talked about it with (Activities Director) Chad (Petersen) (Wednesday) and with all that we were dealing with, it’s all we really could do to possibly save our season,” Hancock said about the Maroons’ decision to have the JVs take over the varsity games during the quarantine, the program’s second one of the season. “If we can play and get that play-in game, we an save this season for the seniors.”

Hancock said the Southwestern A will hold two play-in games on November 2 with the winners advancing to the Western A Divisional tournament. She said the Maroons still have a chance, maybe somewhat slim, of attaining the second seed in Southwestern A, which would automatically qualify them for the divisional with a bye through the play-ins.

“We’re playing it game by game, which is all we can do with these guys,” Hancock said. “And these guys will get better.”

The Maroons are 3-6 this season and 2-5 in conference play. They are scheduled to play at Stevensville on Tuesday.