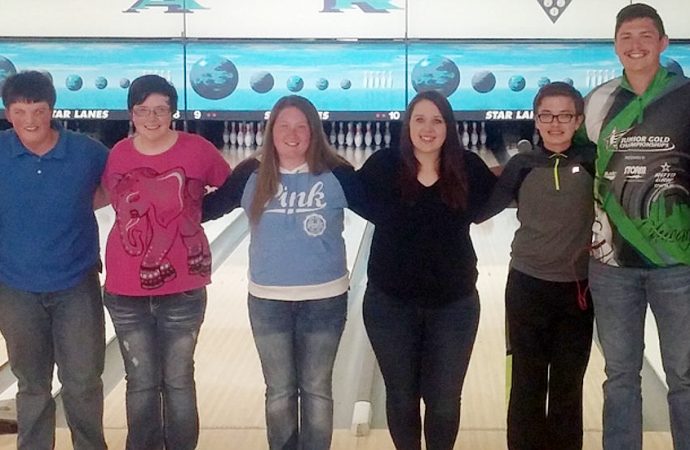 Nine young bowlers from Butte will be heading to Indianapolis in July to complete in the Junior Gold Bowling Championships.  All of them qualified through local tournaments or through the statewide Pepsi Qualifier held a couple weeks ago in Butte.

I recently had the pleasure to sit down with this group of young keglers. They range from seniors in high school to middle school. They come from a small group of youth bowlers from Butte.

When asked how long they have been bowling they jokingly commented since they could walk, but in leagues since bantams (6-7 years old).  Most will be traveling to Indianapolis with their parents, who are also credited with getting them into bowling and helping them stick with it.

When they go to Indianapolis, they will step on the lanes for a weeklong competition where they will bowl head to head against the best youth bowers in the nation. They will compete in male and female brackets, as well as, within their age brackets. They will be competing for scholarships and possibly recruited by colleges that will be scouting the tournament.

In preparing for the competition they are spending extra time on the lanes getting ready for the intense competition. This is an experienced group that has seen competition on average of 25 tournaments in their youth careers. Between them they have averages between 200 and 151 and have shot high games between 299 and 223. However, this is a National event and cream of the crop will be there.

This group has the ability to lean on someone who has been here before. Josie Klapan competed in the Junior Gold Tournament last year and is helping prepare the rest of the Butte contingent prepare. When asked about the competition last year and what she would tell the rest of the group she noted that there are so many people there, more than you ever expected to see in a bowling center and the bowers are really good.

When asked about their plan of attack, they were all pretty tight lipped, guarding it like a national secret.

The lane conditions they will compete on will be challenging and they will have an opportunity to practice on that condition prior to the tournament through practice sessions at Star Lanes.  It is the little insights that Josie can give, knowledge about the lane conditions, and the experience of competition that will help them get over nerves and be prepared for the level of competition that is coming.

Overall, they are all excited to go and compete against the best in their age bracket to see where they stack up.  They are going to learn a lot and gain from the experience and who knows they may be at the top of the stack when it’s all said and done.

No matter if they win it all or not they have already won. They are going to compete in a highly-competitive National event against their peers. They will make friends and learn more in a week then they have in years. The experience will be wonderful.

They are all talented bowlers who I hope peak at the right time and do well in Indianapolis in July.

The bowers who are going are listed below with their age bracket: