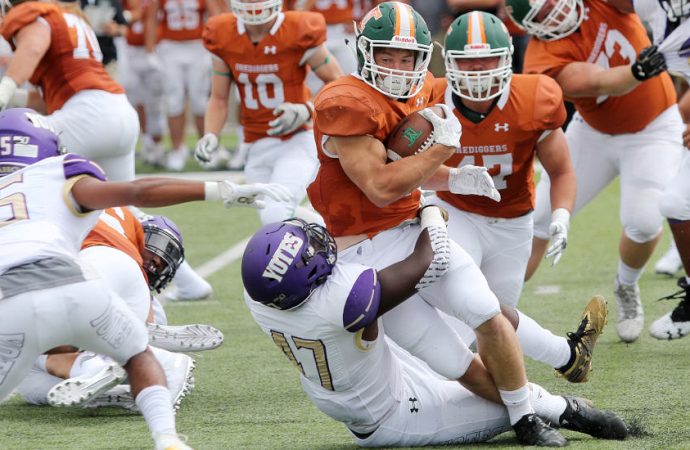 Unfortunately for the Orediggers, that came way too late.

“We’re going to have to find our rhythm, there’s no doubt about that,” Oredigger coach Chuck Morrell said after his team’s season-opening game. “I think our guys will have the confidence to bounce back next week.”

The difference in the game was miscues. Montana Tech made way more than the Coyotes, who are 2-0 after wins over Eastern Oregon and the Orediggers.

“We played a great opponent today,” Morrell said. “We just didn’t play clean enough to beat them. They didn’t make any mistakes, and we made too many.” 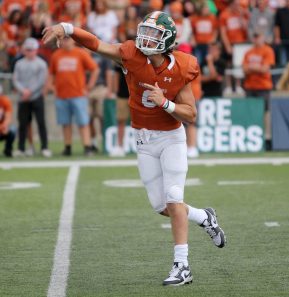 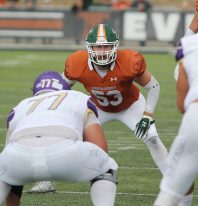 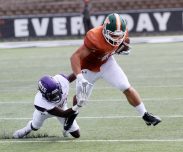 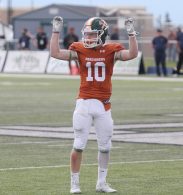 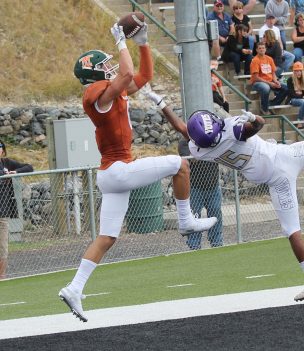 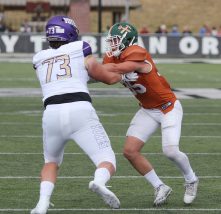 Tech’s Ike Schweikert tries to get past the block of College of Idaho right tackle Garrett Rehberg. (Bill Foley photo) 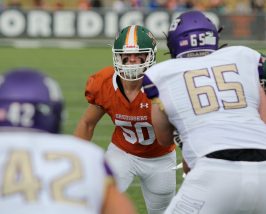 Oredigger linebacker Blake Allred looks to the backfield as the ball is snapped. (Bill Foley photo) 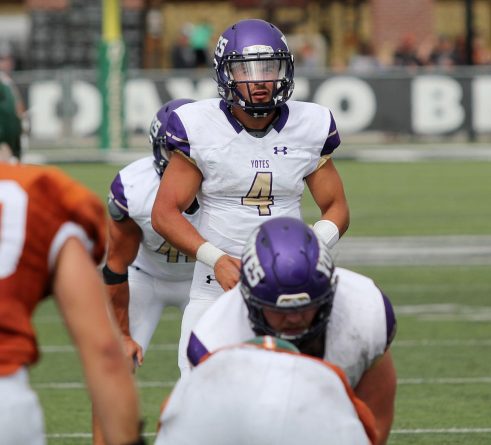 Those mistakes led to big plays. COI’s four touchdowns came on big plays or immediately after a big play.

The biggest play came when Darius-James Peterson hit Hunter Jaurez for a back-breaking 88-yard touchdown. That put the Yotes up 14-0 with 9 minutes, 3 seconds left in the third quarter.

It also came after the Orediggers finally flipped the field-position battle.

Playing in the shadow of their own end zone most of the first half, Tech’s Nik Nunez pinned the Yotes at their own 1-yard line with a perfect punt that took a perfect bounce.

Four plays later, Peterson hit Jaurez over the middle with a mid-range pass. Jaurez did the rest with his feet to cap the 99-yard drive.

“I’m really disappointed coming out of half,” Morrell said. “We really duked it out in the first half. Coming out in the second half and giving up the big pass play obviously really hurt us.”

Tech went into the break trailing 7-0 after a defensive struggle in the first half. The only score before halftime was a 2-yard run by Justin Hellyer with 5:07 left on the second quarter clock.

“Our guys grinded it out, but we’ve got to eliminate the big play,” Morrell said.

The Yotes led 21-0 after Peterson hit Canyon Olsen for a 7-yard score on a bootleg pass on the first play of the fourth quarter.

The Orediggers rebounded and rallied for a pair of touchdowns.

However, in between the Tech TDs, Nick Calzaretta, who ran for 240 yards on 25 carries, broke loose for a 58-yard run. He also set up a TD with a 61-yard jaunt earlier in the game.

“Toward the end of the game we trying to be aggressive, blitzing into their run game and trying to get a stop,” Morrell said, “and they made some plays.”

Tech’s first score came when Jet Campbell hit a leaping Trevor Hoffman for a 21-yard touchdown on a fourth and 16. The second came on a 1-yard plunge by Jed Fike.

“If anything, we’ve got to find more ways for him to touch the football,” Morrell said of Hoffman. “We know he can make plays, and it’s just a matter of time finding the rhythm and the play calling that will help him out a little bit.”

Even more of the problems, Morrell said, were caused by the COI defense.

“They were really physical up front,” Morrell said. “They’ve were a much improved defense over the last part of last season, and then starting out this game they came out and they really set the tone by being physical.

“From our standpoint, we’ve got to do a better job taking care of Jet in the pocket,” Morrell added. “There are a lot of things we’ve got to work on.”

Carter Myers racked up a team-leading 12 tackles. Ike Schweikert recorded eight tackles, while Blake Allred and Jacob Clarke each got in on seven tackles.

Clarke recovered a fumble that set up Tech’s first score.

“I’m still very excited about where we’re at defensively,” Morrell said. “We’ve just got to clean some things up. We’ve got some work to do.”

The Orediggers hit the road next week to take on Eastern Oregon. Morrel said his team will be ready to go.

“I’m proud of our guys,” the coach said. “They didn’t hang their heads. They just kept lining up and fighting. If you do that over the course of time, once we get some experience on some guys, we’re going to be pretty good football team.”