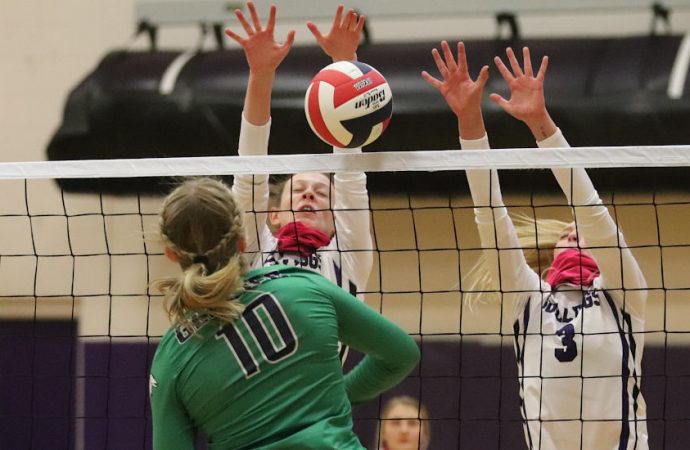 The pandemic seems to be showing more effects on high school sports teams each day and Butte High volleyball can certainly point to it, maybe even blame it.

A good Glacier High team from Kalispell swept the Bulldogs 25-21, 25-18, 25-14 Friday night in a Western AA Conference match in the Ross J. Richardson Memorial Gym at Butte High School. The Wolfpack were tough enough to play, and, they, too, have probably fought their own obstacles trying to stay active through the coronavirus outbreak. Inconsistencies and erratic play were certainly evident on the Bulldogs’ side of the net.

“Inconsistent? You can say that,” Shane Jorgensen, head coach of the Bulldogs, said, also pointing to a 10-day layoff from competition as something “that didn’t help.”

“This was the first night we’ve had almost a full squad back,” he continued. “Three girls came to their first game today (after a 14-day quarantine) and they hadn’t been able to practice. We’ve been having kids in quarantine and you can’t practice a full team together with that. You just can’t practice (as a unit). We’ve just been trying to piece things together the last two weeks.”

It was an oddity to see the Bulldogs seem to regress as the night continued. They almost knocked off the tall, athletic Glacier squad in the first game, then seemed to lose focus and enthusiasm.

“We had the first game (won),” Jorgensen said. “Then we had four missed serves that put us on the edge. Hitting mistakes, we stayed with them, but didn’t come back from the serving errors. I don’t think we ever rebounded from that.

The first game was a one- or two-point contest to when the Bulldogs opened up a three-point edge, 16-13, on a kill by MacKenzie Tutty. The Bulldogs held the slight lead for several serves until the Wolfpack rallied and forged a 19-all tie on a shot by Sidney Gulick. The teams were tied twice more, the last at 21-all on a kill by Butte High’s Kennadie McMahon. Emma Anderson, a 6-foot-2 senior, pounded a kill as Glacier went ahead for good. The Wolfpack marked set point at 24-21 on another Gulick kill, then won when a Bulldog shot caught in the net.

Gulick and Anderson were two of five girls on the Glacier roster standing 6 feet or taller. However, Anderson and Gulick were the only ones of the group to see action.

Butte High never led in the second set, but threatened to several times. Two Bulldog hitting errors put the team behind 2-0 at the beginning of the set. The Bulldogs fell no further behind and forced 10 ties over the ensuing minutes. The last deadlock was at 14-all after a Glacier serve sailed long over the end line. A Butte High serve snagged in the net and the Wolfpack led the rest of the game. Kaylee Fritz fired two aces in a three-point run that opened a 21-15 gap. Set point arrived at 24-18 on a kill by Tori Roo before the game ended on a block by Kynzie Mohl.

The Bulldogs seemed spent and frustrated in the third set. Again, they never led and Glacier bolted to 6-2 lead. The Bulldogs were within a point of Glacier at 10-9 following a Wolfpack hitting miscue, but were unable to pull even. A six-point run with Mohl serving widened the difference to 20-11 and featured two kills by Anderson. One by Butte High 6-2 junior Ashley Olson stopped the run. Glacier, though, kept up the heat and got to a 10-point spread at match point, 24-14, on a kill by Roo. Fritz then aced the next serve and the match was over.

The Bulldogs are 3-8 for the season and will close the home schedule on Saturday against Flathead of Kalispell. The first serve is planned for 4 p.m.

“We’re playing for the play-in game,” Jorgensen said, alluding to Saturday’s game and then road contests at Missoula Sentinel and Missoula Big Sky next week to finish the regular season. “We’re sitting in fifth place, so we will be at Glacier for the play-in game, though three wins might help us catch Glacier (for a higher seed).”

The winners of the single-elimination play-in games will qualify for the state tournament. The higher Western AA seeds of Helena Capital, Helena High, Missoula Sentinel and Kalispell Glacier will likely be home in the round of play-ins.

Friday’s sweep was the Wolfpack’s second of Butte High this season. Roo and Mohl led the attack with eight kills each, Fritz registered 30 assists and two aces, libero Morgan Hernandez came up with 17 digs, and Mohl and Anderson each posted a block.