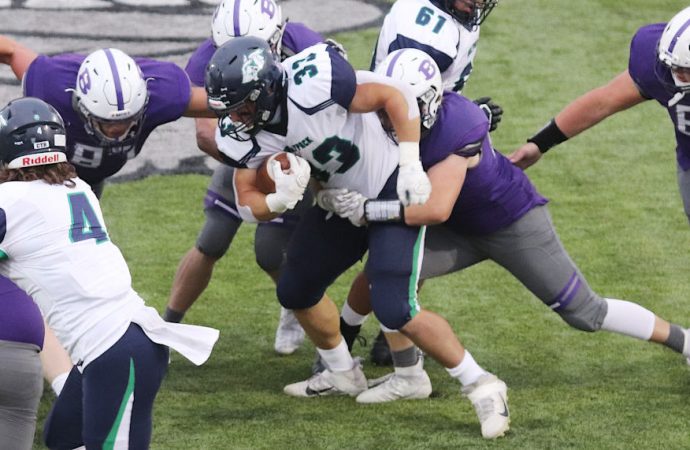 The gameplan could almost be seen, wadded up and blowing across the artificial turf at smokey Naranche Stadium Friday night.

Kalispell Glacier defeated Butte High 33-17 in a Western AA Conference high school football game that served as Butte High’s home opener. The Wolfpack built a 19-0 lead on Bulldog turnovers and then held the home team at bay the rest of the way. (Stats)

A crowd numbering about 400 persons, parents and senior students, sat in the stands with masked strapped across their faces and smoke from farther-off wildfires blowing into the stadium. The wind might’ve been foreboding.

Once, Butte High was able to muster an attack it was able to counter on the scoreboard. The Bulldogs tallied touchdowns on a short plunge by Aidan Lee and a 2-yard pass to senior tight end Jake Olson from quarterback Blake Drakos, both in the fourth quarter. Butte High’s first points came on Casey Kautzman’s 33-yard field goal about midway through the second period.

“We didn’t take advantage of some opportunities,” Grey said. “Our M.O. was that we were close. We have to make those (passing game) plays. We’re getting close. We need to make a couple of plays early in the game to get us going.”

With Tanner Huff running by his side, Bulldog Ryan Neil returns an interception. The play, however, was called back by a penalty. (Bill Foley photo)

Bulldog Christian Vetter tries to keep his balance as he picks up a chunk of yardage. (Bill Foley photo)

A muffed punt set up the Wolfpack’s first touchdown in their win over Butte High. The A.J. Wood recovery set Glacier up at the Bulldogs’ 14-yard line. Rendina bulled into the end zone two plays later. The Wolfpack were back in business three plays later with a fumble recovery at the Butte High 27-yard line – another takeaway.

Quarterback J.T. Allen guided Glacier to the Butte High 6-yard line in three plays on a keeper and passes to Jake Turner and Rendina. Rendina made up the difference to the end zone on a carry.

Wood picked off Drakos on first down to the Bulldogs’ next possession and the Wolfpack took possession on the Butte High 30. Allen connected for 19 yards to Ethan Diede before linking with Turner on a 15-yard TD pass to the northwest corner of the east end zone.

The Bulldogs were able to slow the Wolfpack the rest of the way, cutting down on their mistakes and receiving some good defensive stands.

“The defense came up and made some plays at critical times,” Grey said. “Our offense has to step up.”

Butte High forced the Wolfpack to punt the next possession and the Bulldogs used the possession to set up Kautzman’s field goal. Big legs were plenty in the contest. Between the kicks of Kautzman and Glacier’s Patrick Rohrback, only one kickoff was returned – the others landing in the end zone for touchbacks.

Glacier punted its next possession, too, but scored just before halftime on Rendina’s 8-yard tote with 51 seconds left.

Butte High’s Tanner Huff stopped a Glacier drive with an interception near the goal line and return to near midfield as the teams held each other scoreless in the third quarter. However, Butte High tallied on Lee’s 2-yard blast through and over the goal-line pile on the first play of the fourth frame. The score was 26-10 and the momentum and strength shown by the Bulldogs re-energized the Wolfpack, seemingly.

They marched the possession, all on running plays, seven of the nine plays carries by Rendina, for the team’s last TD. Rendina’s 6-yard romp was the last pack in the set and opened a 33-10 gap.

The Wolfpack burned enough clock on the drive to ruin Butte High’s catch-up chances. The Bulldogs did score three minutes later, at 3:36 of the last quarter, on Drakos’ third-down pass to the 6-7, 235-pound Olson lunging through the end zone after Glacier stopped Lee twice at the goal line by packing the inside.

The Vetters fronted the Butte High running game with Gavin gaining 46 yards on 11 carries, and Christian accumulating 39 on 12. Drakos completed 14 of 25 passes and was intercepted twice. Cameron Guernsey and Olson each caught four passes, and Cole Stewart snagged three – including a 44-yarder that set up the last touchdown.

Huff and Ryan Neil each had 11 tackles to lead the Butte High defense and Christian Hansen had a sack.

The Bulldogs are to be home next Friday against top-ranked Missoula Sentinel for Homecoming.

Allen completed 14 of 25 passes for Glacier with the leading receivers being Turner and Luke Bilau, five catches each. Rocco Beccari led the team in tackles with 11.