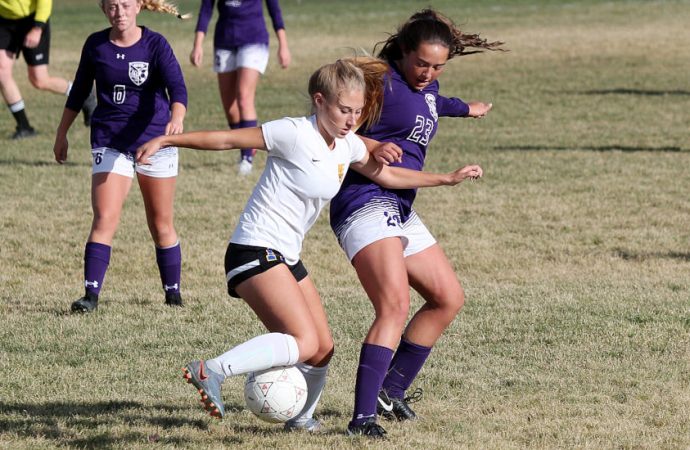 It is not a good sign when the elements literally blow against you.

“Obviously, that’s not the reason we lost,” Jacob Steilman, head coach of the Bulldogs, commented.

No, unfortunately for Butte High, enough Big Sky players netted goals to make the wind-blown one only a sidelight, a conversation piece.

“They overran us in the first half,” Steilman said, alluding to a 9-0 first half Big Sky enjoyed.

The Eagles tallied first in the fifth minute when Whitney Morrison fed Annie Migliaccio for a run to the goal. Hannah Santamaria stepped to her right and jabbed with her left foot to tap the ball in for a goal in the 14th minute and Morrison belted in a 20-yarder five minutes later. 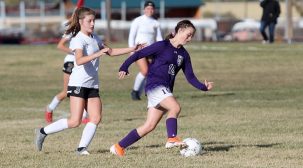 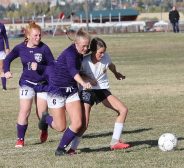 The margin was 3-0 and then occurred the strangest goal of the day. Santamaria shot from out front and the hook seemed wide left. As it headed seemingly past the post, the shooter, her teammates and the goalkeeper and rest of the defense seemed to turn away from the shot as if convinced it was headed left of the net.

However, the ball came up against a wall of wind and was held up and carried, floating just inside the left post for the Eagles’ fourth goal.

Morrison, headed for a hat trick, scored from in front after a short dribble to free herself. Miya Nash used her skillful footwork for a dribble and fake to execute a shot from 10 yards away. Morrison scraped the bottom of the crossbar for her third goal of the half, completing the hat trick.

Two late goals finished the half — by Page Mickelson on a shot through a crowd of players in front of the net, and by Geanna Migliaccio on a rebound that came open when the goalkeeper slipped to the turf while battling the attack and defending the goal.

The Bulldogs did. They yielded just one more score to the Eagles — a shot by Kennedi Bouchee from behind and within a crowd of Eagles on the left side of the net. The second half was seven minutes old and Big Sky led 10-0.

Butte High shut Big Sky out the last 33 minutes of the game, though.

“Our defense was much better in the second half,” Steilman said.

The Bulldogs got themselves on the scoreboard, too, with a run by Christiana Beierle, off an assist from Kassidy Carlson, while challenged by two defenders.

Haley Herron was again good at goalkeeper for the Bulldogs with many saves, including several she had to leap, run, jump or lunge for to get.

Steilman also cited Hayla Hoffman for her good play coming in off the bench, Taylor Burke for her good performance in a different role, having moved to forward, and Lexia Dauenhauer for “being everywhere and just running and running and making an impact.”

The Bulldogs will go to Missoula on Thursday to play against Sentinel while hunting their first win of the year.