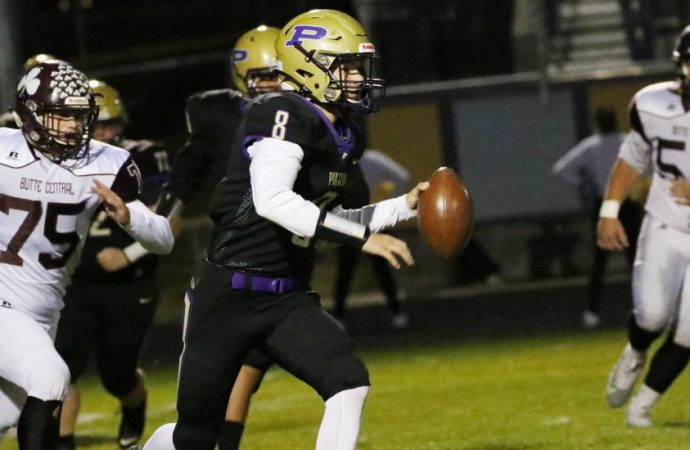 At least he is if you ask the Butte Central Maroons.

Wilson, a sophomore who entered the night ranked No. 9 in the nation in passing yards, had a hand in all eight Polson touchdowns Friday night as the Pirates came from behind to beat Butte Central 56-27.

Wilson completed 35 of 42 passes for 529 yards and six touchdowns. He also ran for a TD and picked off a pass and returned it for a score.

Still, the Maroons held a 27-20 lead at halftime of the Western A battle.

Wilson hooked up with Colton Graham for a 48-yard score with 8 minutes, 13 seconds left in the third quarter. He hit Graham again for the 2-point conversion to put the Pirates on top for good at 28-27.

That came after Wilson hit Ethan McCauley for a 26-yard touchdown in the first quarter. He scored on a 25-yard pick six and found Graham for a 1-yard TD in the second.

Central defenders get ready for the snap. (Shelly Davis photo)

Wilson added a 21-yard strike to Xavier Fisher and a 20-yard TD run in the fourth quarter.

He hit Fisher for 47 and Graham for 19 in the fourth to finish the second half scoring.

Lester finished with 34 carries for 193 yards. Drew Badovinac, who entered the game banged up, shared quarterback duties and passed for 122 yards. Luke Garrison started behind center and passed for 48.

Central will celebrate homecoming next week when the Maroons play host to Columbia Falls. The Maroons will close the season the following week at home against Stevensville.