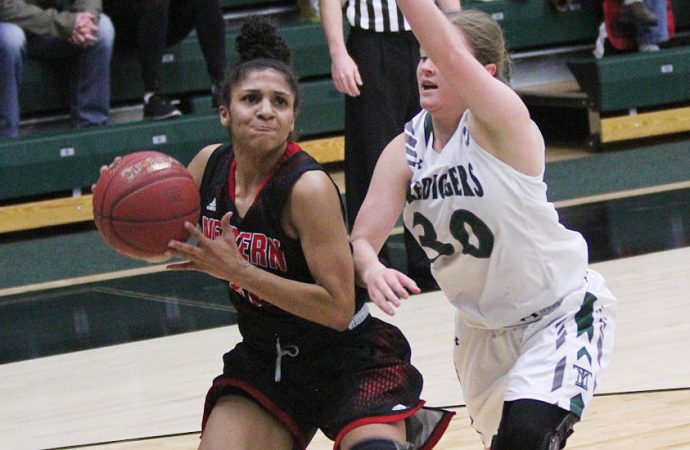 The rivalry renewal Thursday in Montana Tech’s HPER Complex worked out just fine for Montana Western in a 67-56 outcome. The homestanding Orediggers, however, now have to turn their attentions from searching for answers to trying only to forget — at least until Valentine’s Day when the neighbors will go at it a third time this season. (Stats)


“I thought we had more intensity and more fire than we did last week,” Montana Tech head coach Carly Sanon said, referring to home losses versus Carroll and Rocky Mountain. “We had the same amount of rebounds as Western and had 10 ‘O’ boards to their four. But we also had 12 more shots.

“We have to make shots to win games.” 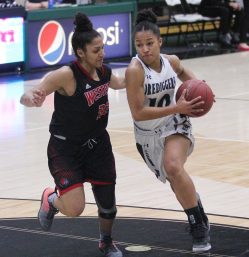 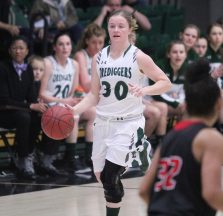 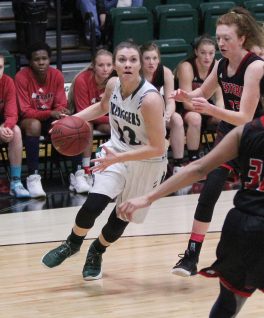 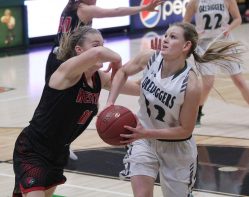 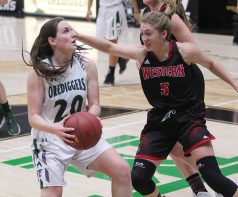 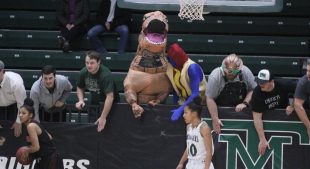 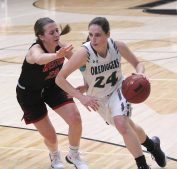 The Orediggers made 34 percent of their tries from the field, including a 4-for-17 rate from the 3-point line. The quick-responding Bulldog defense was a lot of the reason as Montana Western won for the sixth straight time and owns a No. 24 national ranking.

“Playing a team three times is tough, now matter how you look at it,” Sanon said, agreeing the players know each so well they are able to stifle the opposing effort sometimes too naturally once in a defensive read groove. “We started off each quarter really well and then I thought we hit a wall every time.”

Montana Western connected on 42 percent of its floor shots. The Bulldogs were 8-for-18 from long range.

Bulldog leader Bianna King burned the Orediggers early with a first half that included 19 points, 3 assists and five rebounds. She wound up with a game-high 28 points, but Montana Tech never really recovered from the Montana Western spark she ignited.

“King will get her points,” Sanon said. “She is a great player. But, then (Britt) Cooper got going in the fourth quarter and that didn’t help.”

Cooper, the Montana Western post from Harrison, tallied 10 of her 13 points in the last period as the Bulldogs clasped the lock on the victory.

Montana Tech post Shay Potter, who turned in another strong effort, scored the first points of the game with a reverse layup. Montana Western’s Tori Anderson drilled a 3-point basket to trigger a 7-2 run and the Bulldogs held a 21-15 lead when the quarter ended.

Montana Tech never caught up again, but did pull to within 23-21 on a short jumper by Monica Landdeck after a pass from Kourtney Coverdell.

Anderson marked again from 3-point range and the Bulldogs were off on a 9-2 tear that took its advantage to 35-23, then 42-27 by halftime.

A strong finish to the third quarter saw Montana Tech gain sight of the Bulldogs as an 11-2 spree whittled the difference to 10 points, 50-40. Potter’s basket-and-one play began the run. King sank a free throw to end the quarter and Montana Western had an 11-point margin.

“Going into the fourth quarter, we were down 11 and I thought we were OK,” Sanon said. “We got three straight stops, but we never got that shot.”

Unable to cash in on the opportunities, not being able to convert a basket to reward the good defensive play and cause a momentum swing prevented the hoped Oredigger rally, Sanon mentioned.

Montana Tech got no closer than those 11 points of the Bulldogs the rest of the way.

Paige Holmes hit for 10 points to give Montana Western three double-figure scorers. Cooper pulled down 10 rebounds, and Holmes and King each finished with four assists. King also collected three steals. Montana Western went to 17-6 overall with the win and has a 7-4 record in the Frontier Conference.

Potter highlighted the Orediggers’ side of the game with 20 points, 10 rebounds and two blocks.

The loss knocked the Orediggers to 3-8 in Frontier play and 13-10 overall. They have lost three games in a row and will be looking to right the course on Friday with a 5:30 p.m. tip-off against Lewis-Clark State in the HPER Complex. The Warriors won the previous meeting 78-75 on December 2, and their third contest is slated for February 17 in Lewiston, Idaho.

“We need to forget about today and get ready for L-C State,” Sanon said, acknowledging the back-to-back games compounds the toughness of a league schedule requiring members to play each other three times.