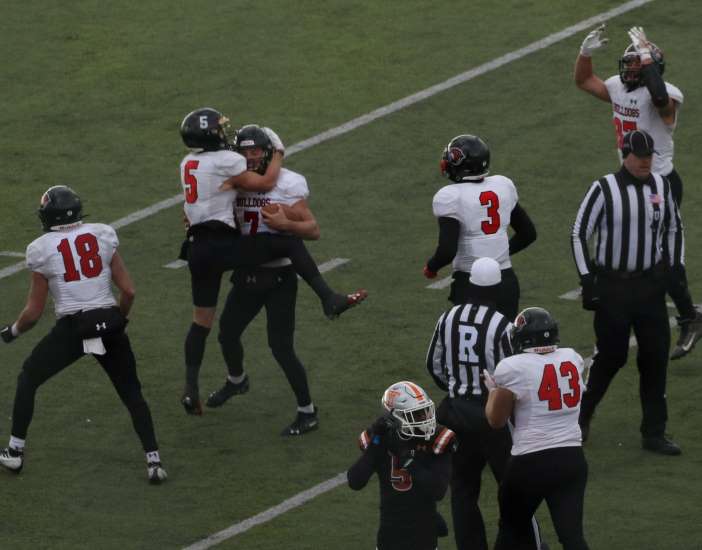 Montana Western’s college football season had been somewhat disappointing after being picked in the preseason polls to repeat as Frontier Conference champion.

Smiles were back on the Bulldogs’ faces Saturday. They beat NAIA 20th-ranked Montana Tech 27-21. They did it on the Orediggers’ Bob Green Field on a cold day of 30ish-degree temperatures chilled deeper by a wind that was constantly steady, except when it was fiercely blustery.

Montana Tech was hoping its Senior Day festivities would be enhanced by better times and the Orediggers were also wanting a win that would keep it in the Frontier Conference championship race and in contention for a national playoffs spot. Montana Western and the wind might have blown all that away.

“Our guys will come back for practice on Monday and will work hard,” Montana Tech head coach Kyle Samson said. “We’ll get prepared for Northern and finish the season out. We can’t control what is out of our hands.

“I’m proud of our guys’ effort. They came up just a little bit short, but they gave it everything they had.”

The Orediggers STATS fell behind early and led just once. Montana Western was tremendously focused on revenge, especially with a chance to knock its neighborhood rival out of the national showcase. A September game in Dillon saw Montana Tech blank the Bulldogs 41-0.

Fourth-year starting quarterback Jon Jund passed only 20 times, but he completed half of them for 124 yards and two touchdowns without suffering an interception. A productive ground attack saw Reese Neville carry 22 times for 160 yards. The Montana Western defense put the stops on the Orediggers.

The Bulldogs scored right away. They drove off the opening kickoff for a Jund-driven 75-yard drive that ended with a 38-yard touchdown pass to Isaiah Thomas. Jund arched a pass to the receiver he found pulling away from the Montana Tech secondary. Both the throw and John Mears’ extra-point kick fought through a strong wind from the west.

Samson said the wind was a factor, but not an advantage or disadvantage for either team. He said it simply made passing, kicking and punting a little less dependable or predictable.

“It wasn’t really a major factor,” he said. “It was the same wind for both teams.”

Offenses mostly sputtered the rest of the first quarter. The Bulldogs created a break when Braden Swank picked off a Blake Thelen pass and set Montana Western up at the Montana Tech 17-yard lie. An incomplete pass and two running plays left the Bulldogs a yard short of a first down. Mears was called upon to try a 25-yard field goal and he drilled it between the uprights. Montana Western took a 10-0 lead into the second quarter.

The Bulldogs defense continued to stymie the Orediggers, but Montana Tech broke on the scoreboard with a special-teams touchdown just before halftime. Naoki Harmer broke through a blocked a punt that Matt Whitcomb gathered up at the 2-yard line and stepped across the goal line. Ryan Lowry kicked the extra point with 25 seconds left in the half.

The score held through halftime.

Change flapped in the wind when the second half began. Montana Tech, buoyed by momentum from the punt block, came back to the field confident. The Orediggers got the first possession of the second half and made it count, taking the lead.

The 10-play, 75-yard drive ended with Thelen connecting with Trevor Hoffman on a 9-yard pass. It was Hoffman’s 25th career touchdown catch, breaking his own school record. After Lowry’s point-after, Montana Tech had a 14-10 lead and looked to be taking control of the game.

The Bulldogs had a different plan.

Neville’s 49-yard blast on second down of their next possession carried Montana Western to the Orediggers’ 26-yard line. Montana Tech’s stubborn defense forced the Bulldogs to use seven more plays to solve the distance. Jund scored on a 4-yard keeper and the Bulldogs had retaken the lead, 17-14.

They didn’t give it back.

They took the ball right back away from the Orediggers on second down of the next series. Braden Smith picked off a pass and Montana Western was in business at the Montana Tech 36-yard line. A 22-yard end-around carry by Trey Mounts positioned the Bulldogs for Jund’s ensuing 9-yard touchdown pass to Elijah Benedick.

The Orediggers tightened the score to 24-21 on the first series of the fourth period. A long drive after the Benedick touchdown saw Montana Tech sustain a march to the Montana Western 27-yard line. The Bulldogs appeared to have stopped it there. On fourth-and-20, Thelen threw to Kyle Jorgensen, who came up with a leaping, reaching, acrobatic grab in traffic to keep the drive alive with a first down at the Montana Western 4-yard line.

Kaleb Winterburn made up the difference on a sweep around the right end.

Winterburn took over running duties in the first quarter from injured Blake Counts.

“Blake got banged up a little last week,” Samson said. “He tried to play through it today, but he was unable to go after a couple of carries. He tried his best.”

The Orediggers lurked dangerously to overtaking the Bulldogs the rest of the way, but spent it playing from behind. The Bulldogs tacked on their last score when Mears booted a 24-yard field goal with 3 minutes, 28 seconds left on the clock.

Montana Tech continued to compete, but two possessions turned over on downs and Montana Western was able to kneel out the last snap.

“Western is a really good team and we knew that coming in,” Samson said. “Our kids gave everything they had.”

The win raised the Bulldogs’ record to 6-4, 5-4 in conference. Linebacker Kameron Rauser led the Bulldogs in tackling on Saturday with seven stops. End Brandon Aimsback had six. Montana Western will close the regular season next week versus Rocky Mountain in Billings.

Montana Tech is now 6-4 overall and in league play. The Orediggers were led Saturday by Thelen with 228 yards passing, going 18-for-36. Winterburn gained 101 yards on 20 carries and Counts had 20 on four. Torgerson caught eight passes for 137 yards and Hoffman had five grabs for 43 yards. Linebacker Cole Wyant led the Orediggers in tackles with 11 and Keyshawn James-Newby was next with seven, including one more sack to add to his league-leading total. 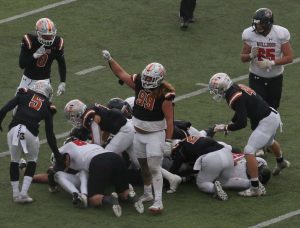 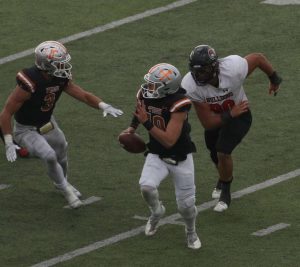