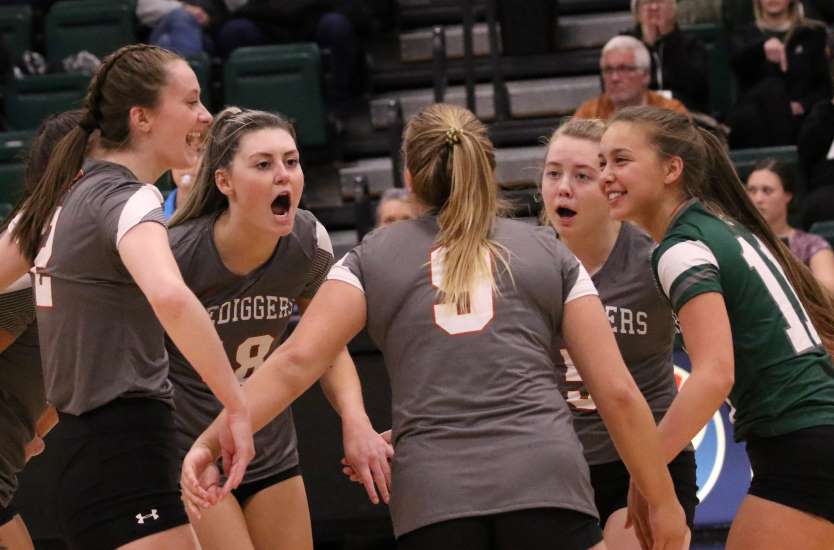 The win over Carroll set up a match with the host Orediggers.  Western defeated Montana Tech in Billings at the preseason showcase and lost twice to the Diggers in regular season play.  Tonight the court belonged to the upset minded Bulldogs.

Montana Tech started out the semifinal match with a win in the first set holding off the Bulldogs 25-19.  Western then tied up the match with a 25-16 win in the second set.  The Bulldogs also rolled to a third set victory out scoring the Diggers 25-18.

Facing elimination in the best of 5 match Montana Tech took the court in the fourth set fired up.  Western cooled them off with 3 fast points but the Diggers didn’t panic.  The home team ran off 6 unanswered points with 2 ace serves by Logan Reed and a kill by Olivia Labeau accounting for the offensive scoring in the run.

Western re-grouped during a timeout and stopped the Oredigger run.  The set went back and fourth with Montana Tech holding a small lead until Western tied the set at 16.  Tech looked to be back in form pushing to a 20-16 advantage and looked to be sending the match to a fifth game.

Western came out of their second timeout of the set with 4 unanswered points to once again tie the match, this time at 20.  Following a Tech timeout the Bulldogs put together another 3 point run to take a 23-20 advantage.

Facing elimination with a loss the Diggers Olivia Muir slammed a set from McKenna Kaelber to stop the run.  Westerns Danyel Martin answered with a kill of her own and the Dogs were 1 point away from the upset.

Kaelber and Taylor Henley block a Western kill attempt and and a Sarah Hopcroft ace made the score 24-23.  A kill attempt from Oredigger great Maureen Jessop missed it’s mark and the Bulldogs had their second upset of the day 25-23.

Western will play the winner of the second semifinal at 2pm Saturday afternoon the winner claiming the tournament championship and the conferences automatic berth in the National tournament.

The 17th ranked Orediggers will now have to wait for the at large bids are handed out to see if they will make their 5th trip to Sioux City, Iowa, under head coach Brian Solomon.  The Diggers finish the season 24-8.