The Rams are coming together as a squad and picking up momentum. Colton Nasheim got things rolling on offense and punched in a TD. The Rams receiver core was active and led by Kanye Chopper, Braden Donnelly, and Renzy LeProwse. QB Noah Sutton also contributed TD’s on offense and made several electrifying tackles on Defense. The Rams defense was led by Roman Taylor, Fabian Thompson, and Drew Pyrah.

The Packers started fast with Weston Klima taking the opening kickoff the distance for the game’s first touchdown.  Walker Frevert and Landon Day-Purcell both scored rushing touchdowns for the Packers.  Colbey Doyle completed the kicking duties converting on 2 of 3 attempts.  Kenny DeShazo, Ethan Marshall and Teddy Mayne did a nice job blocking up front to open running lanes.  The Packers defense was led by Cameron Breitzman who did a great job as a run stopper on the defensive line.  Brock Kelly, Kadin Liva, Payne Mills, and Jack Pesanti provided several tackles from their linebacker/defensive end positions

J.T. Harrison – had a great game from the defensive line being in on multiple tackles and on offense he helped clear up some lanes for the RB.

Kaden Evans – had a great game on offense from WR catching his first touchdown of the year.

Colt Day – Played a great game from the line clearing holes for the RB to go through and on defense was in on a handful of tackles.

Hugh O’Brien – had a fantastic game on offense having a couple of nice runs and a great fingertip catch along with a solid showing on defense being in on multiple tackles.

Gavin Holm – had a great game from QB passing for his first TD this year and having a heck of a game on defense being all over the field.

The Vikings defense – The Purple People Eaters was solid against the Bears.  They were lead by Kason “Honey Badger” Liston, Kendric “The Crusher” McCarthy, Minh “The Dynasty” Saracki, Nick “TNT” D’Amico and Bryson “The Hammer” Hamry.  The defense was flying around the ball with multiple gang tackles.  They had a great goal line stand and forced multiple fumbles.

The special teams hit two out of three two points conversions – both by Logan “ Wolverine“ Grunhuvd.  Logan also had serval great runs on offense and bone crushing hit on defense.  The Viks also took a kick return to the house by Bridger “Bob” Stearns.  Bridger also had two rushing TD’s.

The Offense showed great improvements in the passing game and was prefect on all the passes in the game.  Jayke “Big Bird” Leprowse stepped up in the pocket and hit Kason Liston for a long pass and great catch. 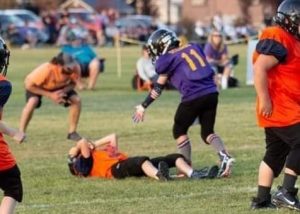 It was a rough game for the Bears full of self imposed penalties and turnovers. The bears simply couldn’t match the pace set by the Vikings as they failed to get the ball across the goal line. The bears will be looking to regroup and clean up their penalties as they move on to week five against the cowboys.

The Chiefs entire offensive line did an outstanding job blocking and opening up big holes for the running backs. Our players continue to improve every week and offensive lineman such as Evan Bobermin, Gaige Baker, Hayden Barry, Kayden Barry, Lane Batterman, Boston Lakalla, and Timothy Shumway all did a terrific job blocking. Wide receiver Dylan Lambson caught a pass for 15 yards.

It was the second meeting between these two teams. The colts couldn’t squeak this one out at then end though losing on the final play of the game on a conversion.

The colts started mighty and hot, Jigme “Jiggz” Hanley, Colin “The Dozer” Mchugh  Colt “the wrecking ball” Horsley Lonnie “so many miles” D ‘arcy Colt “the missle” Dinius and Beaudin “the boss” Murphy played absolutely  stellar on the line having only one dot player last night. They were poised and disciplined on their side of the ball.

They created multiple encroachments on snap counts and opened running lanes for a Montana Resources haul truck to get through and welcomed Kale “sweetfeet” Alexander back he played stellar on both sides of the Ball.

Benny “the jet opened up scoring on a 30 yard sweep to pay dirt! He scored twice!

The blue juggernauts were led on Defense by Brysen “The utility man” Fosness who snagged an incredible interception from the patriots in the red zone on their first possession he also recorded two sacks and a 10 yard completion on offense.

Yet another close one for the mighty Patriots. After allowing 12 unanswered points to the Colts, the Patriots stepped it up on Defense and shut down the quick and nimble Colts. The Defense led again by Middle Linebacker Dustin Watts, contained the colts and allowed minimal gains on runs. Watts also picked up an interception at the end of the game to seal the deal. JJ Hardy played all over the field including outside linebacker and safety and made numerous great tackles to provide the momentum for the Patriots to get back in the game. Landon Wrampe forced another fumble and did a great job on the line along with Bridger Smyth who got into the backfield and created havoc for the Colts offense.  Jack Panisko at safety provided some great containment, especially towards the end of the game, ensuring no large gains.

Hunter Snyder got the Patriots offense on track picking up a beautiful QB sweep to the left side to score just before the end of the first half. Reese Lyndess provided a great block on the defensive back to get Snyder to the outside allowing the score. Strong running again by JJ Hardy moved the ball up the field while the O-line led by Bridger Smyth, Cooper Khatani, Landon Wrampe and Marcus Gleason provided great protection and created some massive holes for the runners. Hunter connected with Tight End Dustin Watts for a couple of great gains through the air as well. With 10 plays remaining in the game, the Patriots Defense was able to stop the Colts and get the ball back. Moving the ball consistently, the Patriots ended up in a 4th and 1 on about the 20 yard line. QB Hunter Snyder powered though on a sneak and gained the first down, giving the Patriots a shot for the win. Again on a QB sweep, Snyder picked up some great blocking on the outside of the line and by receiver Reese Lyndess to get into the end zone again. With the score tied 12-12, the Patriots called a QB fake and handoff to the full back Bentley Detonancour who powered through the line for the extra point to put the Patriots up 13-12.

Defense defense defense, the Commander’s kept the Falcons scoreless in the first half with a thrilling stop on the final play at the goal line. Branlyn Renz and Cameron Klappan both had tackles for a loss.

Jake Janecke and Paxton McEwen both found the endzone on runs from scrimmage, with Gavin Wadas booting two PATs.

Mason Mcintyre ran the ball like an animal and made great tackles, Quade LeProwse taking one to the house also, great blocking and tacking by Robert Messer, Evan Jegtvig and Orlin Southwick! Go Cowboys