MISSOULA — Not even a blizzard could slow down Christian Vetter.

The Butte High senior joined some impressive company by scoring five touchdowns to lead the Bulldogs to a 35-16 Western AA victory over Missoula Hellgate at a snowy Missoula County Stadium. (Stats)

“He had a monster night,” Butte High coach Arie Grey said of Vetter’s big night. “When he got going, he just ran away from people. The offensive line did a great job giving him a little sliver. That’s all he needs.”

Vetter, who ran for 333 yards over the previous two games, busted a 59-yard touchdown run on the second play from scrimmage, and the Bulldogs never trailed as they won their fourth straight game. The streak, which followed an 0-3 start, gives the Bulldogs a home playoff game against Helena Capital next week.

“Four weeks ago, it didn’t look very good for us, did it?” Grey said. “I was proud of the boys. We took care of business. We knew we controlled our destiny to play at home next week, and they did that.”

An interception and return by senior Aidan Pezdark gave the Bulldogs the ball back up 7-0. Then Vetter broke free for a 51-yard touchdown run.’

Vetter, who racked up 203 yards on 18 carries, added a 2-yard plunge after a Dylan Snyder touchdown run was called back by a penalty to make it 21-0, and the game was still in the first quarter.

Dante Maiuri hit Ian Finch for a 13-yard touchdown, then the quarterback ran in the 2-point conversion to cut the lead to 21-8. But another 51-yard touchdown by Vetter made it a 28-8 game at the half.

Finch returned a punt 43 yards for a score in the third quarter, then he caught a long 2-point conversion (after a penalty) to pull within 28-16.

Vetter’s fifth TD, this time from 6 yards out, put the game away in the fourth quarter. 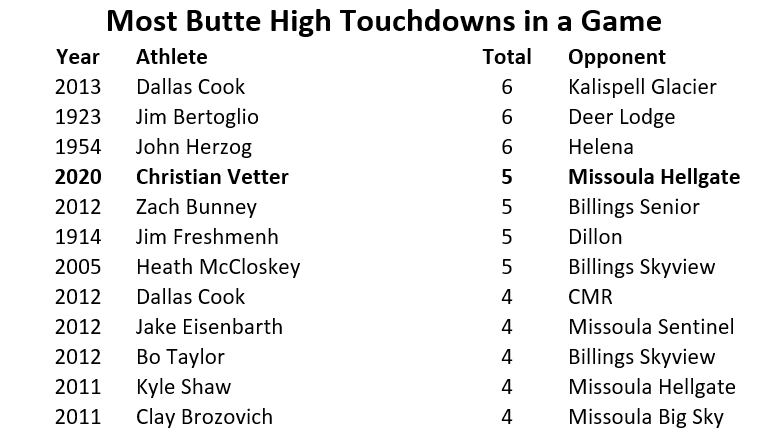 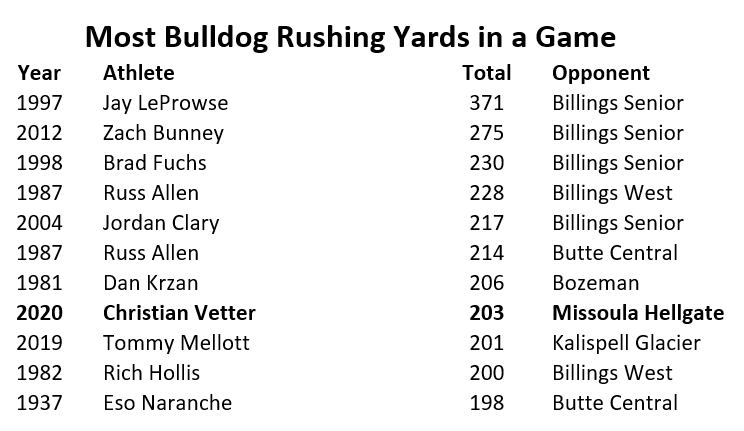 Pezdark and Rylan Richards picked off passes to help the Bulldogs preserve the win in the second half. Aidan Lee, a leader on the defense for three seasons, also batted down a key third down pass.

Offensively, the Bulldogs hardly even tried to throw the ball in the extreme conditions.

Zach Tierney, Lee, D.J. Jackson, Ty Raiha and Timmy Hollingsworth start up front. Rylan Ruscheinsky comes off the bench to move some defenders. Gavin Vetter also picked up some yardage in the win.

“We ran the ball really well in the first half,” Grey said. “In the second half they did some different things and we weren’t able to throw the ball.”

Butte High, which started its four-game winning streak by overcoming a 13-0 deficit for a 20-13 win over Capital Oct. 2 in Helena.

That win, which flipped after Jake Olson blocked a field goal and Christian Hansen scooped the ball and returned it 71 yards for a touchdown, followed losses to Helena High, Kalispell Glacier and Missoula Sentinel.

While the blocked kick was clearly the biggest play of the season, Grey said the turnaround started a week earlier at home.

“The second half of the Missoula Sentinel game is when we started to turn things around with energy on the sideline,” Grey said. “We came out and had a great week of practice that week.”

Butte High’s theme of the season is “Pound the stone,” and now the Bulldogs will get the chance to do that one more time at Naranche Stadium next Friday. Kick off will be 7 p.m.

“Now we get to find out how far we come because we play that team again,” Grey said. “That’s exciting.”

The coach added that his team’s resilience through difficult circumstances is the reason the team will be playing a home playoff game for the second straight year.

“That’s a credit to these kids,” Grey said. “This whole school year, this whole 2020, they did a great job handling things the right way.”

3 comments
Was someone you know mentioned in this article? Celebrate with an AllStar listing!