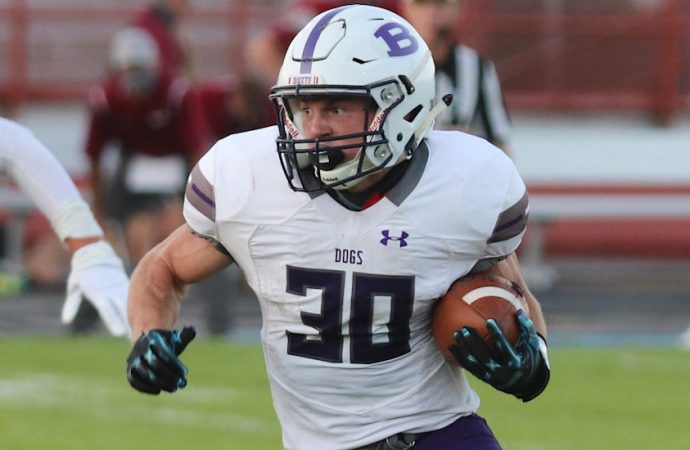 KALISPELL — Friday night was a good night for the Bulldogs.

The Bulldogs also pulled out a huge special teams play along the way.

“I’m really proud of the boys and what they did,” Butte High coach Arie Grey said after his Bulldogs improved to 2-3 with their second straight win. “They did some really nice things.”

The Bulldogs outgained the Braves (0-5) 474-256 in the victory, and senior running back Christian Vetter ran for 161 yards and two touchdowns.

The biggest play of the game just might have been 24 yards from a very unlikely source.

On fourth and 7 from the Butte High 48-yard line, junior Casey Kautzman lined up to punt. When he took the snap from new long snapper Morgan McClernan, Kautzman noticed the Braves were not paying attention to him.

So, he took off running for a 24-yard gain to the Flathead 28-yard line.

On the next play, Blake Drakos hit Braydon Cetraro for a touchdown.

The back-to-back big plays put the Bulldogs up 14-0, after Kautzman’s extra points, with 3 minutes, 58 seconds left in the first quarter.

“That was huge,” Grey said of the fake punt. “He made a huge play.”

That second touchdown came after the Bulldogs did something they had not previously done this season. They scored on their first possession.

Butte High took the opening kickoff and marched 66 yards for a 7-0 lead.

Vetter capped the drive with a 3-yard touchdown run.

“For the first time all year we opened the game with a drive and scored,” Grey said. “That gets you going, gets you some momentum.”

Vetter did his damage on 19 carries. His brother Gavin, a junior, picked up 91 yards on eight rushes.

As a team, the Bulldogs ran for 321 yards, with Aiden Lee and Tucker LeProwse getting in on the act by punching in touchdowns.

“I really feel like we controlled the line of scrimmage on both sides of the ball,” Grey said. “When you can do that, good things are going to happen.”

Christian Vetter’s second touchdown, this one for 4 yards, made it a 21-0 Butte High lead early in the second quarter.

Charlie Hinchey scored on a 3-yard run to get the Braves on the bard with 8 minutes left in the second. Butte High, though, quickly answered.

LeProwse scored on a 2-yard plunge to make it a 28-7 Bulldog advantage at halftime.

Butte High capped the scoring with Lee’s second touchdown run of the season early in the fourth. The run went for 5 yards.

Drakos completed 12 of 19 passes for 153 yards. He used six different receivers, with Cole Stewart and Jake Olson each catching three passes. Gurnsey and Ryan Neil caught two apiece, and Cetraro and Dylan Snyder each grabbed one.

The Bulldogs are back at home next Friday night to take on Missoula Big Sky. Butte High will celebrate Senior Night at Naranche Stadium.

Butte High will head to Missoula Hellgate the following week to close out the regular season.

Grey said the Bulldogs will turn their focus to the Eagles in the morning.

“Tomorrow we’re going to watch film, and we’ll see that there’s still a lot of things we’ve got to get better at,” he said.