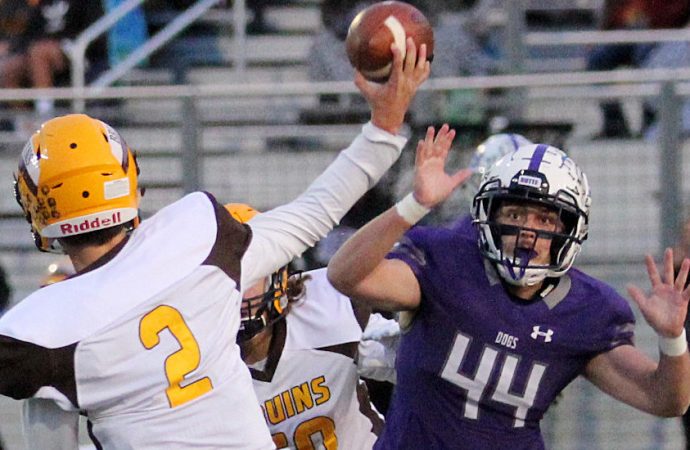 Butte High fans might be mad about the Bulldogs getting dissed in the Treasure State Media Pre-season football poll that was released Wednesday.

After going 11-1 and making an appearance in the Class AA state championship game a year ago, the Bulldogs were not ranked in the top five. Only one voter even mentioned the Bulldogs on a ballot.

Many players on the Butte High team might also find the poll offensive.

Don’t count Arie Grey as one who gives a rip about it, however. The 13-year Butte High head coach said he could not possibly care less about that poll, or any poll for that matter.

“Hey, what can we control?” Grey said. “That’s been the best mantra we’ve had over the last few years. This year it’s even more important.”

“Why are you wasting your time with that stuff?” Grey asked. “There’s bigger things to worry about than the media and social media and what we can’t control.”

The crowd will be limited to a small number of family members of the home team. Fans from Butte are not allowed.

The game, which kicks off at 7 p.m., will be carried live on KBOW, with Paul Panisko making the call (550 AM, 101.5 FM, kbow550.net or the KBOW app). Butte Sports will also be there to report on the action. (Butte High roster; Helena roster)

That action seems like it will come years after Butte High fell to Bozeman in the title game Nov. 22 at Naranche Stadium.

Like the rest of the Class AA, Butte High had its non-conference games wiped out, so the Bulldogs are opening the season two weeks late.

For Grey, this is a classic case of better late than never.

“We’re excited,” Grey said, adding that the offseason was crazy. “Every day is just an adventure. It’s awesome. It’s fun. I love it.  For 2 hours each day I get to be out here with these kids, and it’s normalcy.”

Grey said his players and coaches are working hard with all the new rules for playing in the pandemic.

It’s been a long four weeks of practice for the Bulldogs, who are happy to finally be locked in on game week.

“From Monday on, kids know its game week,” Grey said. “They can’t wait to strap it on, and they’re really tired of playing each other.”

The Bulldogs lost their quarterback and the top two rushers who combined for 2,500 yards and 36 turndowns.

Grey, though, is happy about the players he does have back, including senior quarterback Blake Drakos, who finally steps into the spotlight after serving as Tommy Mellott’s understudy the past three seasons.

Grey said Drakos has worked hard to improve his speed in the offseason.

“He really distributes the ball well. He gets the ball to everybody,” Grey said. “He’s a different kind of quarterback. He can run, he can throw. It will be fun to see what he can do when it is his time to shine.”

Jake Olson, a 6-foot-7, 235-pound senior tight end, who has offers from Montana and Montana State, is a potential major force in the passing game.

Butte High will be strong up front, with senior starters D.J. Jackson, Ty Raiha and Timmy Hollingsworth returning. Senior Aidan Lee figures to be in the mix for the Bulldogs up front. That comes after Lee started two seasons at defensive end.

Zach Tierney, a 6-4, 260-pound sophomore with some major potential, should also be a force, as could 6-5, 325-pound senior Nick Steilman. Seniors Alex Winter and Brayden Guidoni are also lineman who could see time.

“Our front is a veteran group,” Grey said. “They’ve got a lot of reps. We don’t have a ton of depth, but we have some guys who have been in the trenches in big moments. That’s a good thing to have.”

Senior Cristian Vetter, who missed last season with an injury, and his sophomore brother Gavin are in the mix at running back. Sophomore Jace Stenson and junior Kenley Leary will likely back up Drakos.

Butte High’s defense returns some experience up front, in the back and in the middle.

Senior Tucker LeProwse is back after a great junior season at linebacker. He will play alongside Christian Vetter, seniors Riley Chiotti and Aidan Pezdark and junior Luke Anderson.

Butte High’s kicking game is in great shape with junior Casey Kautzman returning. He will take over punting duties this season. Cetraro and Richards give the Bulldogs some big-play potential in the return game.

Overall, the Bulldogs have the biggest team, numbers wise, in Grey’s 13 seasons.

“We have 136 kids out for football. We have unbelievable numbers,” Grey said. “We have the most in (Class) AA, and we’re the 14th largest AA school in the state of Montana.”

All those players, Grey said, are there for the right reasons and for the long haul.

Butte High’s home opener is next week against Kalispell Glacier. The Bulldogs host No. 1 Missoula Sentinel for homecoming the following week. (Schedule)