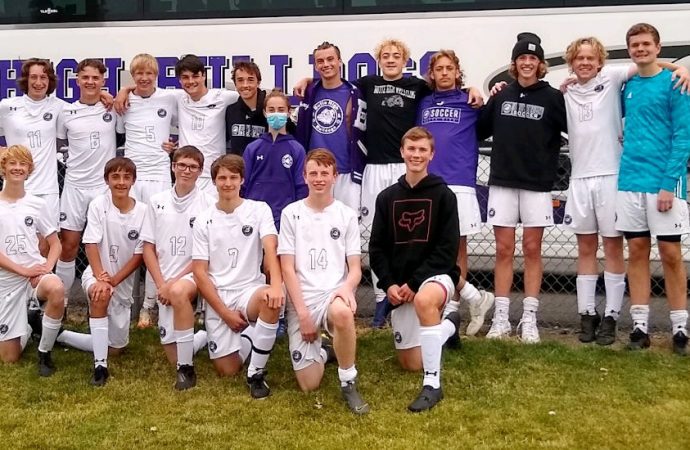 The Butte High Bulldogs were all smiles after knocking off Kalispell Flathead Saturday in Kalispell. (Courtesy photo)

KALISPELL — Butte High’s boys’ soccer team will be heading into the playoffs on a high note.

The Bulldogs battled past Kalispell Flathead for a 1-0 Western AA victory Saturday afternoon. The victory avenged a 4-0 season-opening loss to the Braves improved the Bulldogs’ playoff seed.

“We have come a long way since our season-opening 0-4 loss to this same Flathead Braves team we played today,” Bulldog coach Cody Carpenter said. “I emphasize family and that’s what we are — a family.  Before today’s game, I told our boys that I loved them and was proud of them regardless of the outcome of the game.  However, I also said that if we stayed focused and competed at our highest level for the entire game, that we would come out on top on the scoreboard too. The Bulldogs responded today and played their best overall game of the season.”

Butte High overcame a disadvantage in the second half. A red card left the team playing one man down after a scoreless first half.

Jack Luoma scored off an assist from fellow freshman Riley Doyle to break that tie.

“Even being outnumbered we controlled the possession and tempo until Riley Doyle found Jack Luoma for a rocket left footed shot into their net with 20 minutes left in the game,” Carpenter said. “Our defense led by Kyler Kukay, Isen Padbury, Joe Schrader, Anthony Liva, Kale Anzik, and Zane Fredlund was able to preserve the shutout. Colton Case and Carson Barry led the offense with patient passing to their supporting teammates.”

Carpenter said the Bulldogs were ready to play with 10 players.

“We often practice with uneven numbers so this prepared our team to play 10 versus 11,” he said. “Still, the boys showed tremendous heart, determination and patience in the 1-0 victory. I’m so proud of each one of them. We are excited to start the playoffs on Tuesday.”