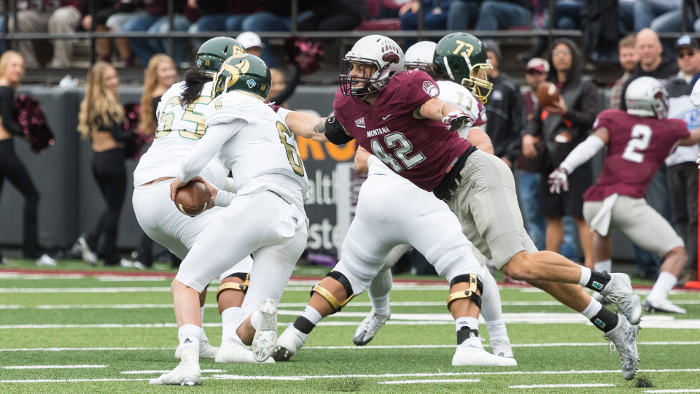 Josh Buss is shown her in this Univiersity of Montana photo.

After dominating Sacramento State with a career-high 10 total tackles, another career-high 4.5 tackles-for-loss and a sack, Buss has finally risen to the top of the league pile, being named the ROOT SPORTS Big Sky Defensive Player of the Week by the conference on Monday.

Buss has been a key part of two weeks of record setting defense for the Grizzlies, where Montana held its opponents scoreless during six quarters of play while racking up 128 straight points. It’s the most unanswered points for the Griz since 1920 when UM beat Carroll College 133-0.

“He’s a special dude. What makes Josh great is that he can do so many things. He’s a tremendous linebacker as far as his nose for the ball, he’s a great pass rusher, he’s one of our better cover guys and he’s just a really good athlete,” said Montana defensive coordinator Jason Semore.

Buss has been hyper-productive in his first season as a starter on the Montana defense, leading the team in tackles with 26 solo and 46 total takedowns.

He also leads the Big Sky in tackles-for-loss with 12.5 at the halfway point in the season and is a big reason why Montana is ranked No. 2 in the nation in TFLs.

The Montana record for TFLs in a season is 27, set by Andy Petek in 2000 when he averaged 2.45 over the course of 11 games. Buss is averaging 2.08 TFLs per game so far this season, tracking nicely to be in the mix for a new school record if he continues this kind of production.

With prolific numbers like that, Buss has been just one of the big sparks for a Montana defensive unit that leads the league in nearly every major defensive category, including total defense, scoring defense and pass defense.

That spark will be needed as the Griz prepare to enter the most challenging stretch of this season’s schedule with two road games in a row against Northern Arizona and Eastern Washington on tap.

“He’s having a lot of success because we have a lot of good players out there around him. It’s hard for opponents to game plan for Josh Buss and a pass rush when you have to block Ryan Johnson and Caleb,” added Semore.

“I think (the Player of the Week award) speaks to the defensive unit as a whole, how hard those guys play and how hard they prepare. Our guys are looking forward to the challenge of the next couple weeks. They feel like they’ve built a reputation for themselves and they want to prove it against really good football teams.”

Buss and the Grizzlies kick off against the league’s preseason favorite NAU Lumberjacks at 5:00 p.m. MT on Saturday at the Walkup Skydome in Flagstaff.