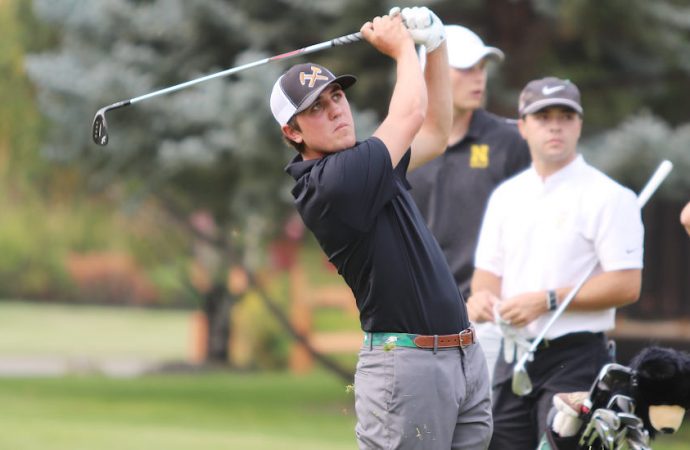 Trey Hoagland had the kind of day every golfer dreams of Monday.

So did his coach.

Hoagland, a Montana Tech senior, lit up the Butte Country Club for a 6-under-par 64 to win the Montana Tech Invitational.

“I had everything going for me today,” Hoagland said after the round on his home course. “I was hitting it well. Even with punched greens, I was putting it well.”

The Butte Country Club aeriated the greens following the Labor Day Classic, and that could not show Hoagland down, who carded nine birdies, six pars and three bogies.

“I rolled a few putts right away and realized they weren’t too bad,” he said.

Hoagland’s 64 was four better than teammate Sean Ramsbacher, who fired a 2-under 68. Isaiah Weldon, who played for the Tech B team, matched par for third place at 70.

Overall, five of the top six finishers were carrying Montana Tech bags, whether for the A team or B team. Oredigger senior Tanna Campbell tied for third place on the women’s side. (Men’s results; women’s results)

“We gave away more medals to Montana Tech than we did everyone else,” Tech coach Sean Ryan said. “That’s a good feeling.”

Carroll College player Samuel Berry placed fourth at 71 on the men’s side. Oredigger J.R. Small and Tech B player Matt Hobbs tied for fifth at 72.

The Orediggers shot a 2-under 278 to run away with the team title. Rocky Mountain College tied with the Tech B team for second place at 277.

Brady Cady added a 74 for Tech’s A team. Jace Rhodes shot 78. Only the top four scores count towards the team standings.

Also for the Tech B, Bridger Martin shot 76, Jhett Braley carded a 79 and Kaven Noctor shot 83.

“It shows the depth that the team has,” Ryan said of the strong Tech finish. “That’s the emphasis that I’ve had is recruiting for depth so we’re not just OK one through five. We’re good one through 12. They guys are pushing each other. They want to get better. It says something about where this team is going. It’s a championship contender.”

Hoagland beat his best score ever on his home course by two shots. He also tied the Oredigger record for low score with Jason Williams, who shot a 7-under 64 at the Warrior Invitational during the 2001-02 season in Lewiston, Idaho.

As impressive as that 64 looks, it is even better when you look at his splits. Hoagland shot a 30 on the front nine, which is considered to be considerably harder to score on than that back at the BCC.

“It’s amazing,” Ryan said. “There’s not a lot of guys who have ever said they shot 30 on that front nine, let alone in a tournament and in tournament conditions. I’m so proud of him. What a way to start his senior year.”

A 30 on the front nine at the storied Butte course really is almost unheard of.

“Shooting that on the front nine is pretty unreal for out here,” Hoagland said, adding his previous best was a 33.

Hoagland, a 2016 Butte High graduate, started the round with two straight birdies. After following with four pars, he birdied the last three holes of the front nine.

“It’s one thing to shoot 64 and another to shoot 64 with three bogies,” Ryan said, adding that the final holes were reminiscent of the baseball movie “For Love of the Game.” “It was awesome. He was like the pitcher, Kevin Costner, at the end of the game. Nobody’s talking to him.”

Ryan praised Hoagland for bouncing back from back-to-back bogies with two birdies.

The tournament victory was something Hoagland did not think was possible this time last year. He was set to finish his golf eligibility in the spring before finishing up classes at Tech in December.

When the NAIA canceled the spring season because of the coronavirus pandemic, however, it awarded players an extra year to make up for the lost season. Now, Hoagland will finish up his decree in electrical engineering with a minor in business in May.

“I was planning on going just this semester for school,” Hoagland said. “Then I got the year of eligibility. I figured I might as well play. It will be my last chance to play golf competitively. It kind of worked out nice.”

His memorable round was witnessed by his parents and his sister Hailey, a former Butte High and University of Montana golfer.

“It was really cool for Hal and Missy to be there to watch,” Ryan said. “And for Hailey to watch. I think Hal is still shaking.”

On the women’s side, Rocky Mountain College led the way, with Battlin’ Bears Kaelyn Volk and Claire Wright taking the top spots at 76 and 78.

Campbell’s 80 tied her with Rocky’s Amanda Conner. Rocky’s Kaitlyn Fleming was fifth at 82.

“Tanna did awesome,” Ryan said, adding her parents and her sister Taryn, a former Oredigger, watched her round. “She had kind of a shaky start and was able to battle. Tanna is a great senior for us. She brings a lot of leadership to the rest of the squad. Third place is awesome for her, but she can build from this.”

The tournament was scheduled to be a 54-hole event for the men and 36 holes for women. It was shortened to 18 holes for both because of the pandemic.

Next up for the Orediggers is the Carroll College Invitational, which is Sept. 22 at the Bill Roberts Golf Course.