Top 25ers Tech, Rocky to collide in “a big one” 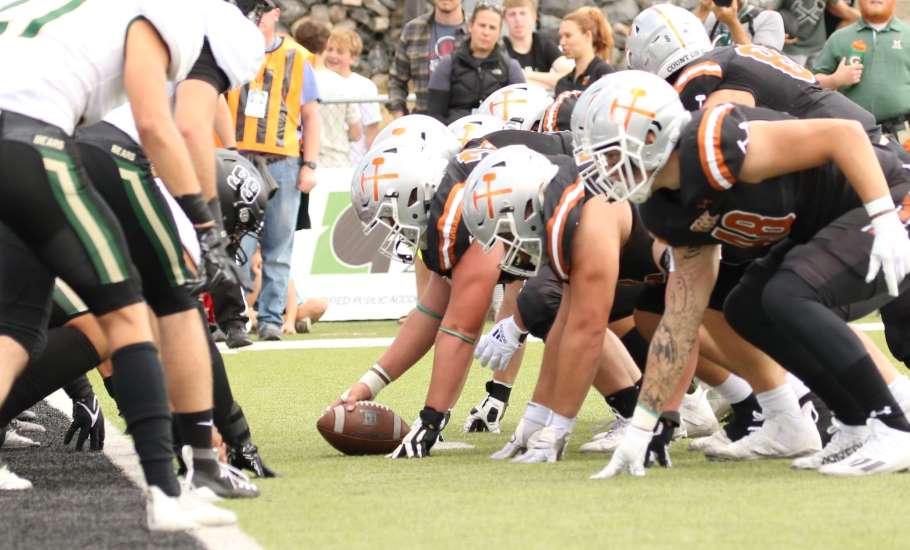 Big game hunting is on in Montana and those searching for it in college football don’t have to look any farther away than Billings.

NAIA No. 23-ranked Montana Tech and No. 24-ranked Rocky Mountain will vie in Billings on Saturday in a clash of Frontier Conference co-leaders. Both enter with 5-2 records with Montana Tech seeking revenge on the Bears in addition to a leg up in the league standings.

The third week of the season saw Rocky Mountain hold off the Orediggers for a 28-20 win on Montana Tech’s Bob Green Field.

Quite a lot has likely changed in both teams’ approaches, balance and lineups, but not so much the weather – not like one would expect anyway. Kyle Samson., head coach, of the Orediggers said temperatures are predicted to be in the 60s at 1 p.m. kickoff on Herb Klindt Field and over the afternoon.

“We’re getting back to the second go-round (on the Frontier schedule),” Samson said. “It’s a double-up. We’ve played them before. It is a unique part of our league to play some teams twice.”

The remainder of the schedules for Frontier Conference football teams will be second-time game meetings of the year. Montana Tech will end the regular season with games against Montana Western next Saturday in Butte and at Montana State-Northern in Havre the week after.

“It is an opportunity to play somebody we didn’t play very well against,” Samson said about going against the Bears again. “It is not very common to get a chance to go play somebody you lost to. So, we’re excited to go out and play a good game.”

“(In the prior game), we got in a hole early. So, we have to do a better job of taking care of the football and starting out fast – which we’ve been doing since then.”

Four turnovers frazzled the Orediggers in the earlier meeting, especially after Montana Tech had played error-free football in regard to possession through its first two games of the season.

“They play hard and they have great speed on offense,” Samson said. “Coach (Chris) Stutzriem does a great job. They always have a good crowd there and we have a good crowd, too. There are a lot of former Orediggers living over in that area.”

An inside track to the Frontier championship is at stake and so is positioning for a post-season playoffs spot. Montana Tech beat Southern Oregon 45-21 last week while Rocky Mountain was suffering a 24-0 upset loss at Carroll.

“Rocky is coming off a loss,” Samson said, noting the Bears are likely to be irritable about the defeat still. “Their only other loss is to College of Idaho. They’ll be ready to play.”

Losses to Rocky Mountain and College of Idaho are the only blemishes on the Orediggers’ record.

“I’m sure they’ve made their corrections (from the loss) and will be ready for the game,” Samson said. “Teams that win in this conference sometimes have to go back and play that team a second time and it’s a different ballgame. Things are usually different from the first time.”

The injury news, without divulging specifics, for Montana Tech, Samson said, is that the Orediggers will get “a couple” of players back for the game who missed last week, and will be without a player or two, who played last week, because of injuries.”

“Everybody is dealing with injuries this time of the year,” the coach said.

Surprises are unlikely, he said.

“It’s taken us to the point that we know what they do and they know what we do,” Samson said. “It’s now all about execution.”

The possibility of this game being a loser-out on the national playoffs scenario is real and realized.

“We have the best conference in the country, I think,” Samson said, “and we beat up on each other, put losses on records. It’s hard to get into the playoffs (for multiple teams) that way. This will be a big one. It will knock somebody out, probably.”

Montana Tech averages 37 points a game and has been holding opponents to an average of 16.14 points. Quarterback Jet Campbell returned from injury last week to share duties with Blake Thelen and both put in productive days. Running back Blake Counts is No. 2 in the conference in rushing with 90 yards per game on average and Trevor Hoffman is the leading receiver at 89.6 yard per game. Kyle Torgerson averages a third-place 58.6.

Defensive back Naoki Harmer is the Orediggers’ leading tackler with 6.4 a game, and has 4.5 tackles for loss. He also has broken up seven passes. Against Southern Oregon, he had a blocked punt that became a touchdown for special teams teammate Clay Fisher, and also sacked a quarterback on a fourth down, leading to a clinching touchdown. Defensive end Keyshawn James-Newby is tied for the Frontier lead in sacks with five. The Montana Tech defense has totaled 16 turnovers – seven interceptions and nine fumble recoveries – this fall.

Kicker Ryan Lowry is 9-fof-12 on field goal attempts, and 32-for-33 on extra points. Punter Andrews Almos averages 42 yards per kick. Torgerson is explosive on returns and had a TD called back by penalty on one runback last week.

George Tribble, who has stepped in for injured Nathan Dick at quarterback for the Bears, averages 123.8 yards a game passing. Zaire Wilcox leads the ground game with 79.6 yards a game rushing. He and fellow running back Reese Neville have a team-high five touchdowns apiece. Deniro Killian Jr. leads the RMC receivers at 57.1 yards a game. Linebacker Nolan McCafferty leads the team in tackles with 46 with defensive back Jack Cline second with 33, and lineman Wes Moeai third with 32. Kicker Austin Drake has drilled five of six field-goal tries and 21 of 24 extra-point tries. Wyatt Brusven averages 40.9 yards per punt. Freshman Jack Waddell ranks as a threat as a returnman.