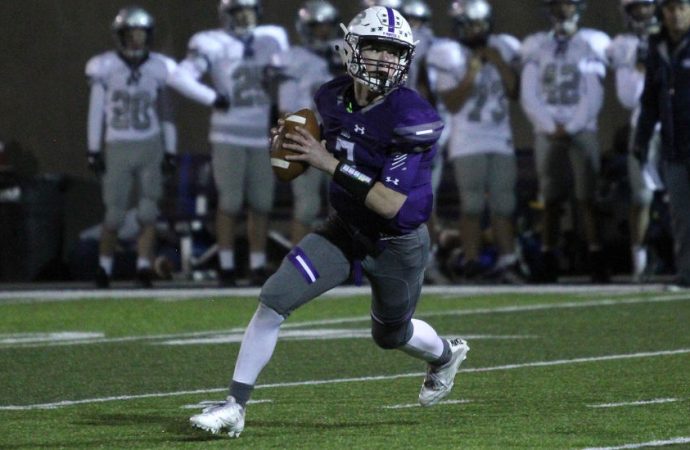 Tommy Mellott wants to turn all of his attention into bringing another state football title to Butte High.

That is why the soon-to-be senior quarterback was tweeting about Montana State Friday night.

Mellott went to Twitter to announce his commitment to play football for the Bobcats, a move that comes about a month before the Bulldogs report to their first practice.

“Obviously I have the highest hopes for Butte High,” Mellott said. “We’ve got a lot of returning pieces and we have some great additions to our offense. I have those high hopes for us. I don’t want to be thinking about (college plans). I want to give everything I have for Butte High.”

Excited to announce my commitment to Montana State University. Thank you to my family, friends, and coaches who have helped me. Go Cats! pic.twitter.com/BgBb6LXwcz

As a junior, Mellott completed 194 of 363 passes for 2,156 yards. He threw 19 touchdowns compared to seven interceptions, helping the Bulldogs qualify for the playoffs.

Mellott, who also stars in basketball and track for the Bulldogs, said the Bobcats are going to give him a look at quarterback, though that might not be the position he will ultimately play for the Bobcats.

“They’ve been talking to me as an ‘athlete’ right now,” Mellott said. “They think I’ve got a lot of potential at quarterback. They’re going to evaluate me there this year. When I get there we’ll find the right fit for me.”

Mellott said he will likely play some safety for the Bulldogs this season, too. That would give the Bobcats a chance to see what he has on the other side of the ball.

“They might be able to look at me there potentially,” he said.

Of course, quarterback is his preference.

“That’s kind of what I’m doing my while entire high school career,” Mellott said. “That’s what I’m best suited to do. But I’m willing to do what helps the team.”

Mellott is the second Mining City player to announce his commitment to the Bobcats this month. Soon-to-be Butte Central senior Aaron Richards committed to the Bobcats on Twitter on the morning of July 1.

Mellott and Richards work together for Butte-Silver Bow. They work in community enrichment, mowing and doing other projects to clean up the city. Richards will be a lineman for the Bobcats.

Mellott, the son of Shane and Dina (Fogarty) Mellott, said education drew him to MSU as much as the football program. He said he will be taking introduction to engineering and anatomy at Butte High this school year as he eyes possible degrees in engineering or health sciences.

“I just really believe in what they’re doing academically,” he said.

The decision to announce his commitment in July was Mellott’s he said.

“They didn’t pressure me at all,” he said of the Bobcat coaching staff. “I’ve been thinking about it a lot this summer and it has been in my head a lot. I just wanted to get it out of the way.

“I feel confident in my decision and I just pulled the trigger on it.”