They’ve patrolled the diamonds, bossed the batter’s box and terrorized the opposing pitchers their entire stays in the Butte High softball lineup. This month sees their prep careers ending.

“Brittney and Taylor, they’re four-year varsity starters for us,” Stosich reminded. “Offensively and defensively, I don’t know where we’d be without them, or without their competitiveness. They’re two of the best hitters we’ve ever had.

“I knew they’d set their sights on my little sister’s (season) batting average record of .496. One’s over it now and the other’s close to it. Records are made to be broken.”

Stosich has had a great view of all of it. His “little sister,” Ali, starred for the Bulldogs 2004-2007 and her record average may not survive Tierney’s assault. Tierney is at the .545 mark with the Eastern AA Divisional tournament yet to play this weekend. Local hopes are for the state AA tourney to be realized on the slate the following weekend.

The Tierney average ranks third in the Eastern AA Conference. Huff hits at a .492 rate, just off the Ali Stosich pace and flirting with the .500 ranks. It is the Eastern AA’s sixth-best average. Huff also has eight home runs, tied for the state lead, and 30 runs batted in, near the leadership in that category, too, while holding a conference No. 2 slugging percentage of .983.

For all that bang and boom on the diamond, the most impressive statistic might be one they share — career 4.0 grade-point averages their four whole years at Butte High. Both will be pre-med majors in college, come this fall.

“As a coach, I couldn’t ask more of any two players,” Stosich said. “Their dedication and the hard work, they put into softball. And they’re both probably going to be valedictorians. Both want to be doctors. On and off the field, they’re as good as I can get for the team.” 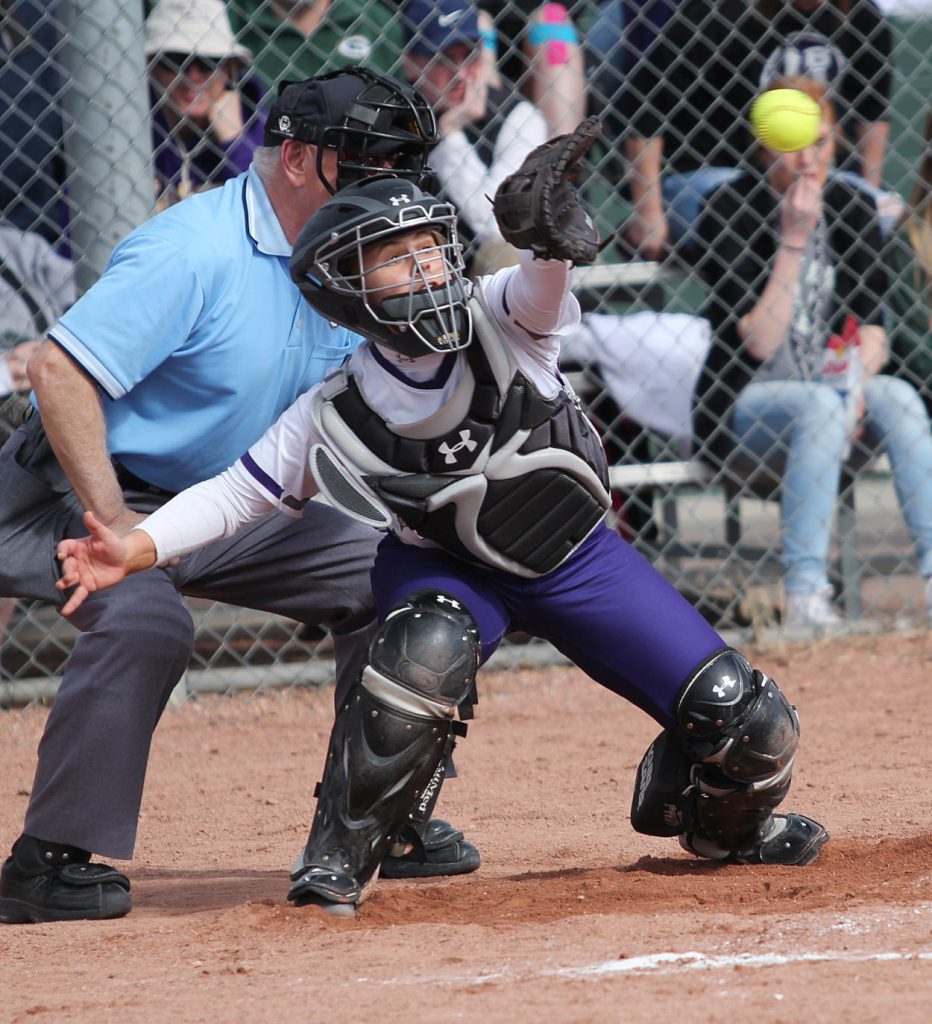 Bulldog catcher Brittney Tierney goes up for a pitch that is high and outside April 18 in Butte. (Butte Sports file photo)

The Bulldogs rebuilt this year and Huff and Tierney were the key cornerstones in this new foundation. It was a tough season, a learning season and though the grades weren’t necessarily high, the finals aren’t distributed until the post-season. This is where 2019 Butte High softball hopes to make the grade.

The Bulldogs recently finished a 5-14 regular season with a 23-0 thrashing of winless non-conference opponent Missoula Big Sky, a member of the Western AA. The league record Butte High put together landed it a No. 6 seed in the divisional tournament being held Friday and Saturday in Billings. The Bulldogs will play Billings West at 11 a.m. on Friday to begin play. The need two wins at the divisional, which is replacing the best-of-three playoffs system formerly in place for advancement, to qualify for the state AA tourney. The state tourney is set for Stodden Park in Butte, May 23-25.

Tierney has been a magnet for volleyball and basketball All-State and all-conference credentials, and for all-league documentation in softball.

Huff won the home run and RBI titles in Class AA last year and was still omitted from all-conference or All-State recognition. She proved this year her 2018 numbers were no fluke. She has five doubles to go with her eight home runs. Coach Stosich quickly pointed out the star shortstop would have 11 round-trippers this year if stats from the season-opening Great Falls Jamboree were counted. She hit nine last year.

“It was a big change this year, being the go-to (veteran),” Huff said about the leadership role she had to embrace this season. “We grew with those girls who all graduated last year, too, so it’s really weird they aren’t here.”

Huff was eased a little bit into her varsity membership. She contributed as the designated player as a freshman before taking over the shortstop job her sophomore season. A fitness devotee, Huff has also competed in cross country and lists working out as a favorite pursuit.

Much of her “free time,” though, has been dedicated to softball.

“Quite often,” she answered to being asked how much she works on the sport. “I work on it in the offseason — even in the snow, and in the gym.”

Tierney, too, has seemed tireless.

“When I’m supposed to sleep, sir,” she said with a bow and a smile when asked when she put in her extra softball work.

Tierney has been a three-sport varsity standout her entire high school career competing in volleyball, basketball and softball. The versatility has shown up on the diamond for her, too. She is the team’s catcher this year, as she was as a freshman when a coach “handed me a mask and a mitt and told me to go behind the plate.” She’d never attempted the position before.

Her sophomore year, however, saw Tierney play a solid second base a couple of weeks before what turned out to be a wise coaching adjustment let her own the hot corner, third base. She starred. 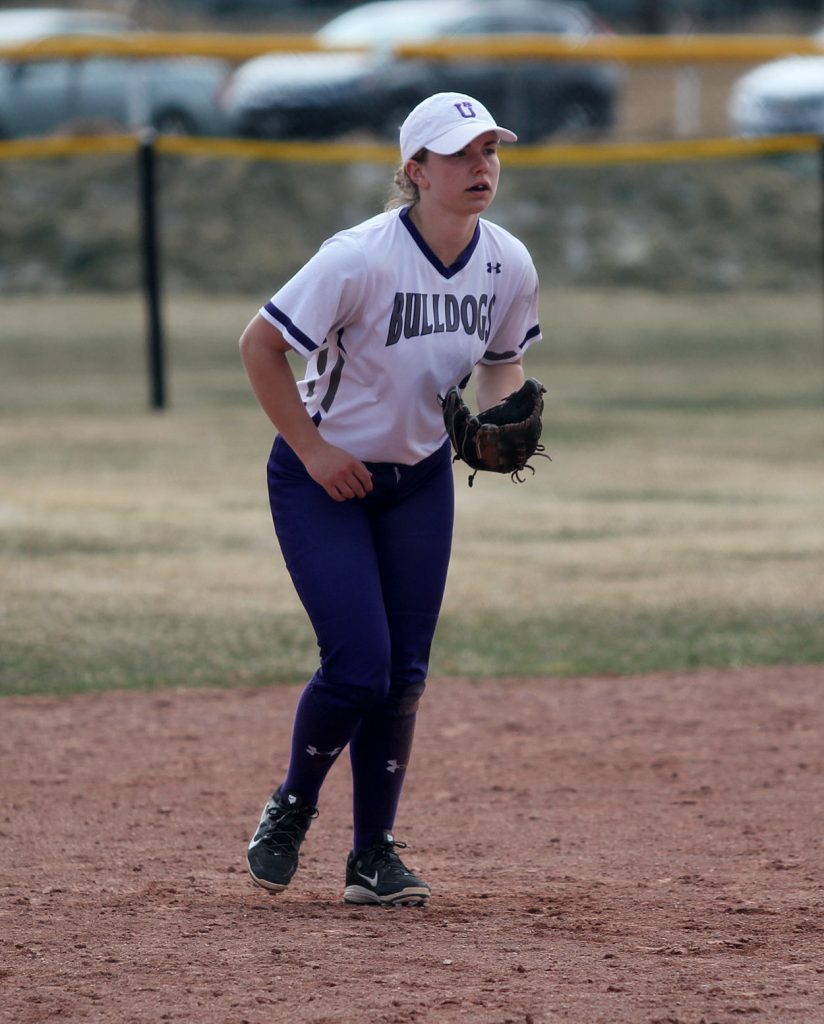 Huff and Tierney benefited, too, they said, from playing with older girls all their softball careers. They consistently competed in the age group above their own ages as they grew in sports. Huff said doing so seemed to mature them faster. They, and persistent worker and dependable first baseman Jaden Cleveland, are the only seniors on this year’s Bulldog edition.

Huff said that just, simply the team is what she has enjoyed most about playing this year. Tierney normally bats third in the lineup behind slap-hitting freshman third baseman Kodie Hoagland in the leadoff spot and fast-of-foot contact hitter MacKenzie Tutty at No. 2. Huff, the power hitter, holds the cleanup spot as she and Tierney form the dynamic duo that often leads to a score.

“It was scary to play varsity as a freshman,” Huff remembered. “As the season went on, I realized they were the same kind of girls I’d been playing with my entire life. So, it was not so scary at the end.”

Being a freshman, that 2016 season, Tierney was reluctant to decline a tryout at catcher as was suggested. It turned out pretty darn well.

“I like it,” she said. “I still enjoy it. You always get to see what’s going on and you get to touch the ball almost as often as the pitcher does.

“But, catching that first game was the scariest day of my life.”

As now graduated Emma Cox developed into a fine catcher, Tierney found a home at third base and said she fully expected to be there again this season. She’d continued to work out at catcher and be there a few innings the last couple of seasons and sharpened her skills in summer ball last year knowing Cox wouldn’t be back. She and junior Trisha Ericson both see duty behind the plate this year as Ericson comes in from right field to play there. When such occurs, Tierney re-stations at third base and Hoagland goes to right field.

Sophomores McCaul McCarthy and Madison Skeel are the pitchers, McCarthy gaining most of the conference starts. Tierney’s ability behind the plate is key to the pitchers’ continuing development as they succeed four-year starter Kaidy McClafferty, who graduated and has gone on to pitch for Bemidji (Minnesota) State in college ball.

Cleveland plays first base with junior Bradie Lester at second and sophomore Aubree Corcoran in left field to round out the usual starting alignment.

Huff said she is thankful she started out her varsity career as the designated player, being only a hitter without playing defense.

“It was an easier transition, not playing in the field,” she said. “Also, I usually had a hot dog or a cupcake waiting for me on the bench when I was done batting.”

Her earlier moments on the varsity were not so humorous. Huff said her scariest moment her freshman year was in cutting loose a hard throw, maybe to try to impress the coaches, she bounded the ball off a wooden wall and it ricocheted off of McClafferty’s face. Huff thought she’d seriously hurt the team’s ace pitcher.

“I was terrified,” she said.

Not much has scared either, since. Huff will be attending the University of Montana in the fall and said she is giving thought to trying out for the softball team. Tierney is heading south, enrolling in the University of California at Davis and is undecided about whether she will continue to pursue any athletic endeavors. Both schools are members of the Big Sky Conference, should any future meetings on the field be envisioned.

Huff admitted she likes hitting the home runs the best of all her favorite elements in softball.

“But, hitting the ball into the gaps and watching (the outfielders) run after it is fun, too,” she said with a laugh.

Softball is her favorite. It’s obvious. Huff said the camaraderie in the team sport is what she likes best. Tierney said she likes the push she gets from the competition in the game.

Tierney’s view on softball is a little different. While she still finds the game fun, she said she has had trouble accepting the “failures,” as common and expected as they are.

“Failure recovery,” she said. “Going 1-for-3 is good in batting, but in shooting a basketball, it’s not so great.’

So, she said, the memory has to be short. To dwell in that failure of an inning or so ago might get you a 1-for-4, or worse, have you finish at 0-for-3.

The sport might leave too much time for thinking. Tierney is, if anything, a thinker and as much as she likes softball, she has to contemplate when asked, if it is her favorite.

“I think,” she said, “whatever sport is in season is my favorite.”

Therefore, Stosich is happy there is at least one more week left in this softball season and is really hoping for another.

“We’re going in with our heads up and we’re ready to go,” he said. “Billings West is a pretty good team. If we get good pitching and timely hits, we’ll be OK.”

The Bulldogs lost twice to Billings West in the regular season, but they were close games, ones in which Butte High had chances it didn’t cash.