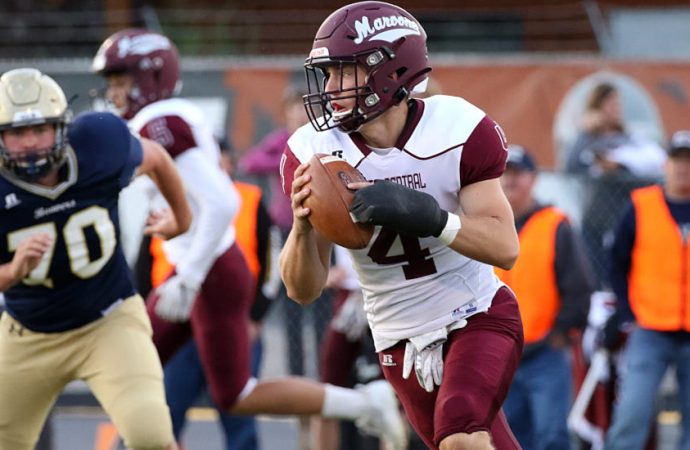 Thomas McGree will not be the first member of his family to play football at Carroll College.

He won’t even be the second.

After contributing to the Butte Central boys’ basketball team’s 54-21 win over Belgrade Friday night at the Maroon Activities Center, McGree confirmed that he will be the third brother in his family to take the gridiron for the Fighting Saints.

McGree signed on the dotted line Monday. The school has not yet announced the signing.

The boys’ sister, Lace, who was a standout track athlete at Butte Central, also attends the Helena school.

The signing comes after Thomas McGree put up one of the best seasons of any Class A quarterback while leading the Maroons to the playoffs. McGree passed for 2,272 yards and 19 touchdowns in nine games. He also ran for 510 yards and 11 touchdowns.

McGree, the son of Jim and Erin McGree, did a good chunk of that while playing with a cast to protect a broken bone on his left hand. The right-handed quarterback took every snap from the shotgun.

“We couldn’t,” McGree said of taking a snap from under center. “And we couldn’t do read zones, so that was out of our playbook for three or four weeks.”

McGree also missed a game late in the season with a sever cut on the middle finger of his throwing hand.

Those injuries were probably part of the reason why McGree was thrilled to learn the Saints want him to play safety.

“There’s not as much pressure, and I just like it better,” McGree said of playing defense.

McGree said he chose Carroll over an offer from Montana Tech and interest from some other schools. He said the choice of Carroll over Tech was not an easy one, despite the family connections to the Saints.

Now, McGree said he is excited to head to Carroll, where the program is once again pointing up under new head coach Troy Purcell.

“They got a lot of young kids,” McGree said. “Their quarterback (Devan Bridgewater) is a freshman. Their running back (Matthew Burgess) is a freshman.”