Third time is the charm for Oredigger men 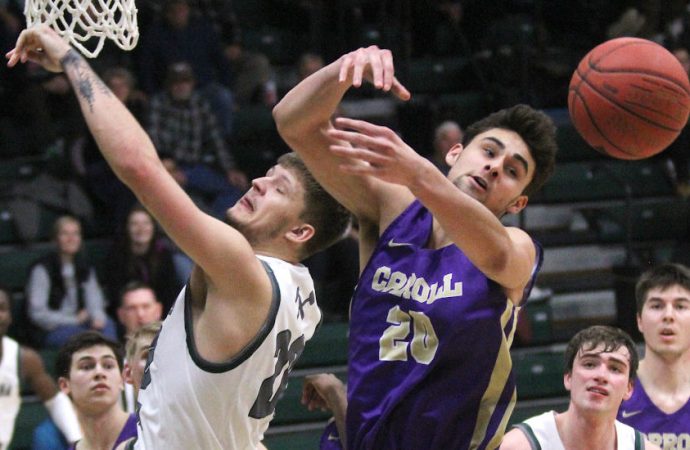 Taylor England of Montana Tech and Gaven Ramirez of Carroll College battle for a rebound Tuesday nigh at the HPER Complex. (Bill Foley photo)

Cody Baumstarck summed up the night with a smile.

It took three tries, but the Orediggers finally got the best of their biggest rival, knocking off the No. 17 Saints 74-66 in a Frontier Conference men’s basketball game at the HPER Complex. (Stats)

To say the Orediggers were overdo in Round 3 is a major understatement.

“It was a great win,” said Tech coach Adam Hiatt, whose team has had too many near misses this season. “We really closed the game way. We played a much more measured, deliberate second half. We really defended well in the second half. We had a really good plan and we executed the plan well.”

Three Orediggers, including Baumstarck, scored in double figures in the victory. For Hiatt, however, the Big M is flashing for one reason. Defense. 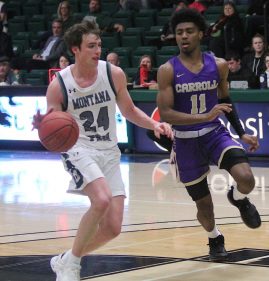 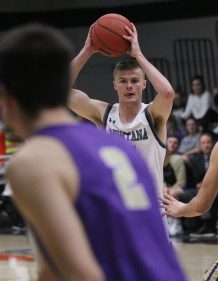 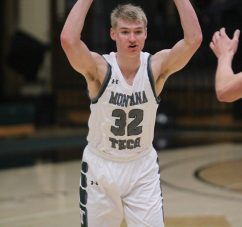 Taylor England of Montana Tech and Gaven Ramirez of Carroll College battle for a rebound Tuesday nigh at the HPER Complex. (Bill Foley photo)

Troy Owens Jr. of Montana Tech takes the ball to the hoop between Carroll College defenders Jovan Sljivancanin, left, and Gavin Ramirez Thursday night at the HPER Complex. Owens missed a reverse layup, but teammate Cody Baumstarck cleaned it up for a putback. (Bill Foley photo)

Three nights after a disappointing performance in a loss to the University of Providence, Tech’s defense was off the charts.

“I take full responsibility for how we defended on Saturday,” Hiatt said. “That was completely on me, and I told these guys, ‘I’ll never let you down again.’”

The coach said his team’s mindset this week was to forget about missed shots. Instead, the team focused on defense.

Two of the shots that eventually did fall were released by Drew Huse.

Huse hit 3 pointers 1 minute, 6 seconds apart late in the fourth quarter. The second one made it a 63-58 Oredigger lead with 3:58 left in the game.

The battle that saw 16 ties and 13 lead changes belonged to the Orediggers.

“Those shots really took the lid off the basket. They really did,” Hiatt said. “He made those two big ones, he gave us a little separation, and now we can play in front, and we can make some free throws down the stretch.”

Huse scored 17 points, but his coach cited his defense.

“Shamrock Campbell had a great first half, 5 for 5,” Hiatt said. “We really challenged Drew to do a better job defensively on him. He did. He was 0 for 4 in the second half.”

“Troy Owens was unbelievable defensively on Dane Warp,” Hiatt said, coincidentally as Owens walked out the locker room behind the coach.

Owens raised his arms as he walked down the hallway. “I love you coach,” he said.

Hiatt smiled and continued about Owens.

“(Warp is) one of the best offensive machines in the conference,” Hiatt said. “For him to be able to hold him to two points was an incredible feat.”

Hiatt seemed most excited to talk about Baumstarck, who came off the bench to score scored 14 points and grab nine rebounds.

“Cody Baumstarck picked up his game in a big way,” Hiatt said. “It was the best game he’s played for us. It’s what we expect from him, 14 points, nine rebounds. That was big.”

Baumstarck, who played much of his time alongside Taylor England, said playing the Saints was a huge motivational factor in the win.

“It was just being ready to play Carroll,” Baumstarck said. “Everyone hates Carroll. We just all got ready and prepared, coach had a good game plan for us, and we just came out and played.”

Baumstarck said his stat line gets a major assist from England, who was a clear focus of the Carroll defense.

“Taylor is the best center in the league, so every team is fronting him and double teaming him,” Baumstarck said. “That leaves the other guy open sometimes.”

“We were able to close the game out,” Baumstarck said. “We had a good second half, finally. It was nice. We played well as a team.”

Connor Kieckbusch and Christian jones also contributed for the Orediggers, and Hiatt said he was pleased with all eight of his players that hit the floor.

“That’s what this time of year is all about,” Hiatt said. “Multiple guys have got to step up in order to secure wins against good teams.”

Jovan Sljivancanin tossed in 19 points and grabbed 14 rebounds to lead the Saints, who saw four players reach double figures. Gaven Ramirez came off the bench to score 13 points, while Dennis Flowers III and Campbell each scored 12.

The loss drops Carroll to 19-8 overall and 10-5 in the Frontier Conference. Next up for the Saints is a Friday game with Lewis-Clark State College.

Tech plays host to the Warriors on Thursday.

Baumstarck said the Orediggers will be riding high into that game.

“We’ll get a lot of confidence off this game, especially going into LC,” Baumstarck said. “It’s a good pick-me-up game.”