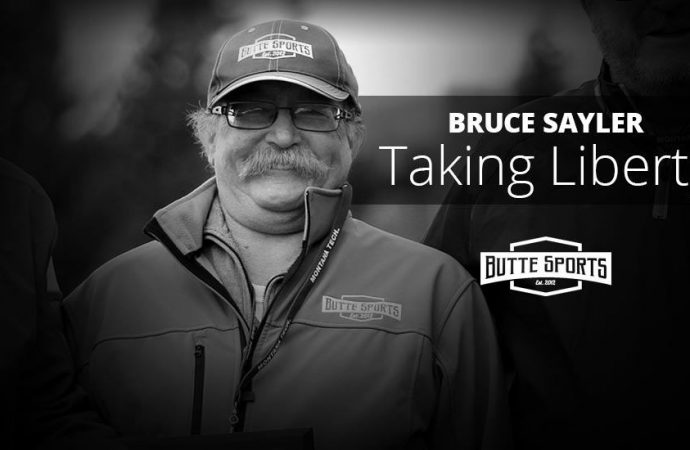 I took whatever I had left in my wallet and tossed it out on the bar. It wasn’t yet noon, but I couldn’t wait in the lobby because I didn’t have enough money left to tip the bellman for stowing my bag somewhere off the floor.

So, the bag was with me and I placed it half under my stool while I ordered the plain Coke and finished off my cash on hand by purchasing a what-the-heck Keno card. Somehow, April Fool’s Day seemed a more-than-apt name for that morning in 1980.

Luckily, I’d stashed a $10 bill in my bag for the cab ride to the airport and the home half of the round-trip plane ticket was still valid.

It hadn’t all been that bad — really.

Shortly after the bartender slid my glass of Coca-Cola to me, a commotion was heard near the doorway to this particular lounge in Caesars Palace.

Through the door, towing a small crowd in his wake, strode the world heavyweight boxing champion of the world: Larry Holmes.

About 14 hours previous, I’d been in row three of the press section at ringside and witnessed the champ punch Leroy Jones into eighth-round submission. It was a good seat. Bill Cosby sat a few feet away, off to my left, and Howard Cosell was in row one, staring at a television monitor, on the same side of the ring as I. It was announced that world lightweight champion Hilmer Kenty was also at ringside, and he rose from his chair directly behind mine to acknowledge the ovation.

The end of the fight came despite a large female Jones supporter admonishing the challenger to “hit him Leroy, You hit him now! Hit him, Leroy. C’mon hit him hard.” She hollered her orders continuously while circling the outside of the ring and flailing punches into the air through each round fought. She stopped only between rounds, sitting on whatever seat was immediately available, patrons sometimes scrambling out of her way to allow her to sit.

Alas, Leroy didn’t hit him — at least not hard or often enough and Holmes was the still the champ.

Now, Holmes looked my direction, saw me sipping my Coke at the bar and smiled.

“Great,” I replied and waved, took from the moment that Larry Holmes spoke to me.

Similar brushes had been almost routine that weekend in Las Vegas. The very hospitable Caesars Palace folks had accorded me a VIP room, complete with a deep octagonal bathtub equipped with a shower in the middle, a TV and phone in the bathroom and a round bed I was never quite sure how you were supposed to get into.

The Night of Champions fight card featured Holmes and Jones in the main event after displays by the likes of Alexis Arguello, Thomas Hearns and Montana’s own Marvin Camel in big-time preliminary bouts. Three more bouts were shown on large screens inside the arena and were televised accounts of other title matches that took place that night in other parts of the country.

The night had opened with Olympic team heavyweight, Marvin Stinson knocking Eddie Wilson out in the first round. The U.S. boycotted the Summer Olympics that year over Russia’s involvement in Afghanistan. Arguello then outlined tough club fighter Gerald Hayes in a featherweight non-title bout that went the distance, and Hearns devastated Santiago Valdez in a very short welterweight match.

I had to endure a butt-chewing from a doorman to even enter the arena. I had gotten at in line outside the facility and watched Cosell arrive in a limousine that drove across Pancho Gonzalez’ parking place outside the tennis court. Cosell and his crew walked past us and through us and into the side door. Tom Jones went into the side door, too, and some well-dressed men pushed Joe Louis in a wheelchair through the same entrance.

When I reached the general entrance, the one for the fight crowd, the doorman pulled aside. I was wearing a laminated VIP badge issued by the hotel to the working press members. I figured it was to gain me entrance. It was, but through the VIP door, the same one used by Cosell, Jones, Louis, New York Times columnist Dave Anderson and other on-the-scene notables and celebrities.

The doorman told me I had embarrassed him and Caesars Palace by being a VIP and standing in line at the general entrance. It made the venue look bad, he said.

Geez, how’d I know I was a VIP in Vegas? I thought briefly about trying out that line at the Butte Civic Center — then thought better of it.

My rube -ness had actually been exposed the night before at the weigh-ins/press conference. The fighters were presented to the media and public for comment after having weighed in at the events center.

I didn’t want to look like I didn’t belong so I nonchalantly approached a tall, young thinly built African-American man who was wearing a nice suit and tie, and I tried to make small talk, figuring he was connected to the fight scene in some way — younger brother, sparring partner, neighborhood friend, whatever.

I said something about it should be a pretty good card, and it was nice to get the national TV attention that was shining its light on the sport at the time and that Vegas really knew how to do it up right and everything. The young man looked as uncomfortable as a 5-year-old dressed for church in the summertime. He answered politely with yes sirs and kept his gaze fixed on the front of the room.

The announcer then said it was time to announce the next boxer to the gathering.

He said something like the following: “Ladies and gentlemen, the our next contestant has a record of 18-and-0 (I think it was) , and has been setting the boxing world on fire with his speed and power in the welterweight division. Coming from Detroit, Michigan, he is known as The Motor City Cobra. Caesars Palace and Las Vegas, Nev., would like to welcome and introduce to you, Thomas ‘The Hitman’ Hearns.”

With that, the young man I’d been trying to talk to walked to the front of the room and stood at the podium, ready to take questions.

Camel’s fight was up next on the night of the card and he was pitted against Yugoslavian Mate Parlov for the cruiserweight crown. Parlov held the title and had defended it once against Camel in an earlier meeting in Yugoslavia, winning a decision in which many in the boxing world had disagreed. This was the rematch.

George Chemeres, a promoter from Tacoma, Wash., walked down my row and seemed surprised to see me. We’d met a couple times previously at cards in Missoula. Chemeres was on his way to speak with a woman who happened to be sitting beside me. She was the reporter from Ring Magazine.

The Camel-Parlov bout had started and Camel was using his unorthodox style and good left hand to score, though it was form a defensive posture. Parlov attacked, but plodded, and missed with most of his business blows.

It went to a decision, again.

“Marvin won it,” I said aloud. “It should be unanimous.”

The man seated on the other side of me, a reporter from The (Portland) Oregonian, gave me an astonished look as though I couldn’t possibly have it right or know what I was talking about.

The decision was announced. Camel was, indeed, the winner and would take home the world championship belt.

The Portland writer frowned, shook his head demonstratively, looked at me in disbelief and started typing away feverishly.

The fight was the semi-main, leaving only Holmes and Jones to duke it out. As mentioned before, Leroy couldn’t hit him and Holmes kept the title. After the press conference, where I was served a beer and a sandwich with the rest of the media corps, I phoned in a story and then tried some games of chance.
Guessing on how to get into a round bed, I found sleep and went to the waiting place the next morning, where Larry (you know — Holmes) spoke to me. He left and it was time for me to find a cab, too. I collected the $85 I won on the last Keno ticket and went home.