‘The Axe’ Axelson notches another victory 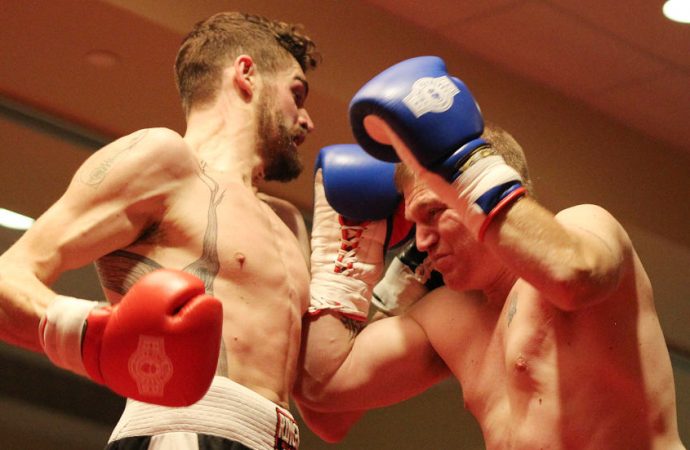 Axelson knocked out Butte boxer Keith “The Hit Man” Larson in the co-main event of Hollis Huggins’ “Never Give up, Never Surrender” fight card. Thee nine bout card was held at The Grantree Inn and featured boxing matches in addition to both a Muay Thai and MMA contest.

The accompanying main event was a title fight in the light-heavyweight division between longtime Lodge Grass veteran Woody Springfield and Townsend up and comer Caylob Wilverding. Springfield emerged the victor after a grueling contest where he stopped Wilverding with body shots in the third.

Axelson, who now lives in Belgrade, won his pro exhibition fight by TKO over the seasoned professional in the very crowd-pleasing co-main event. Over the course of the four round bout, “The Axe” was able to score five knockdowns on Larson. “The Hit Man” continued to get to his feet and fight on. In the waning seconds of the final round, Larson was knocked down and the referee waved the bout off, giving Axelson the TKO win.

For Axelson, the bout was a true privilege.

“Back in high school, when I first started training, Keith fought a couple of my teammates; Matt Palmer and Lance Gilmore,” Axelson said. “Keith beat them both at least once and it made me realize how dedicated you have to be to take on a guy like Keith. They inspired me to train hard and pay close attention to the great coaches I’ve had over the years. Meeting Keith in the ring was a real honor. They don’t make too many fighters with that grit and toughness anymore.”

With this victory, Axelson is eyeing a pro bout on Feb. 9 with Butte favorite Kadin LeCoure.

“Kadin comes from a long lineage of very talented boxers in the LeCoure family,” Axelson said. “He has been tuning everyone up in pro fights around the state and the region. A win over him would certainly help to solidify my reputation as one of the better fighters, both amateur and professional, to come from Butte.”