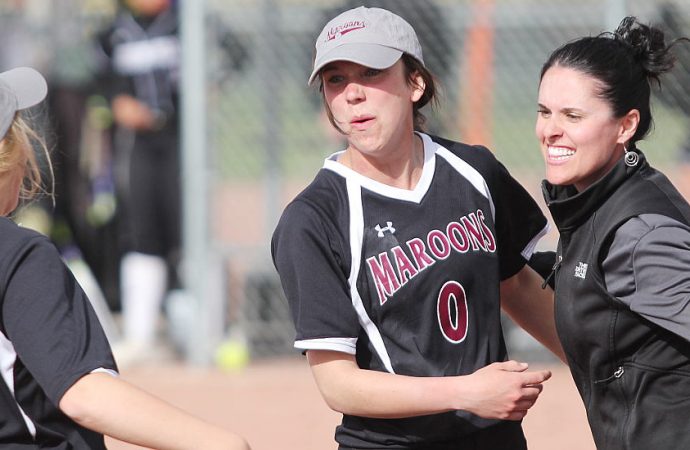 Kelci Thatcher called it the toughest decision of her life.

The school announced the decision today. Thatcher broke the news to her team this week.

Thatcher, 31, and her partner, Amanda Krieg, are in the process of adopting their two foster sons, George and Tino. They have provided for the boys the past four years.

“I feel like I’m missing so much of Tino’s stuff,” Thatcher said. “I think last year I made only about two of Tino’s baseball games. My parents never missed any of my games.”

By stepping down, Thatcher will be able to spend more time with the boys. She said that it breaks her heart to spend less time with the girls on the softball team, though.

“I thought about it for a whole year,” Thatcher said. “To be honest, it was probably one of the toughest decisions I have ever made.”

“Kelci’s dedication, passion and leadership will be sorely missed but we respect and understand her decision to step down at this time,” Petersen said in the statement. “On behalf of everyone at Butte Central, we thank Kelci for all her efforts and hard work over the last eight years, and wish her and her family all the best in the future.”

Thatcher thanked her assistant coaches and players for a great experience as head coach. Her sister, Sarah Stepan, coached with her the entire eight years.

“I was so lucky to coach with such great people,” Thatcher said. “I had great kids in the eight years. They were just good kids. I don’t think everybody can say they had a positive experience coaching like I did.”

Even though she teaches in Butte School District No. 1, Thatcher has been involved with Butte Central in some capacity for most of her life.

She started coaching as an assistant in girls’ basketball and softball early in her college career.

“I’ve coached almost half of my life at Butte Central,” she said.

“I hope I can have half the success that he had,” Thatcher, then 23, said at the time.

Thatcher’s Maroons definitely accomplished that and then some. The Maroons continued BC’s rich softball history by qualifying for the Class A State tournament the next six season.

The high point of Thatcher’s career came in 2016, when the Maroons finished second to a powerful Frenchtown team despite being down to just nine players for the state tournament.

As a player, Thatcher was a standout middle infielder for the Maroons, even though she battled through knee injuries that put a damper on her basketball career. Thatcher, who tore the ACL in her left knee twice, was an all-conference and All-State second baseman as a junior and senior at Butte Central in 2006 and 2007.

“She’s so coachable. She’s got a great knowledge of the game. She’s like another coach out there,” Patrick said of Thatcher in 2007. “She’s the backbone of the infield.”

During her senior season, Thatcher hit .484 with a .562 on-base percentage.