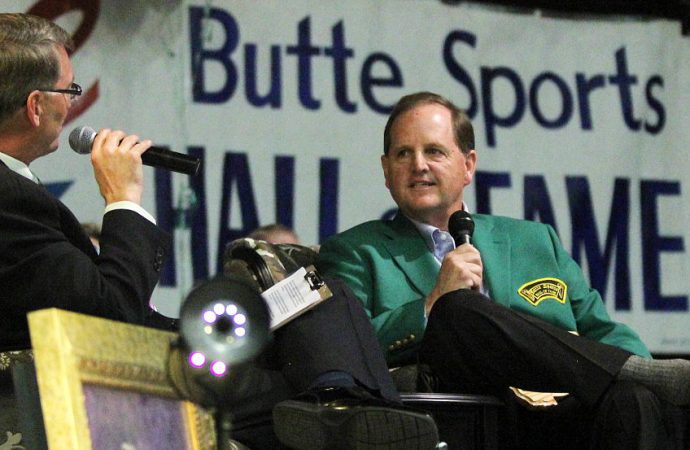 Saturday was a night of tears and laughter as 10 individuals and four teams took their rightful place in the Butte Sports Hall of Fame.

The night started with DeVore, a former Butte High Bulldog and Montana State Bobcat, jokingly jabbing at former teammates. It ended with Barb Street and the Street family paying an emotional tribute to her son Randy, who died at the age of 42 in 2012.

The 16th induction ceremony for the biennial celebration of Butte sporting legends strayed from its usual course. Instead of each individual giving a speech, they sat down for a one-on-one interview with master of ceremonies Ron Davis, who engaged the crowd and encouraged some good-natured humor. 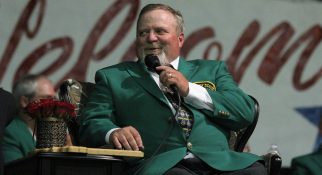 Mark Johnston shares some stories of his wrestling days. 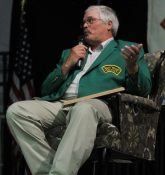 Mark DeVore fires some shots at some teammates in the audience. 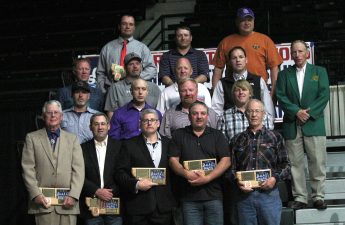 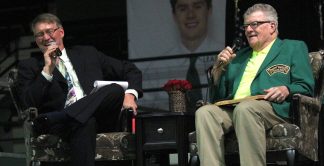 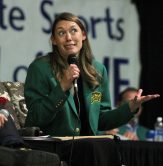 Jamie (Wolstein) Toivonen gestures while talking about her Hall of Fame career. 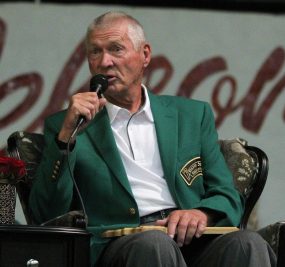 Dan Hodge talk of the meaning of induction into the Butte Sports Hall of Fame.

Charlie Merrifield laughs as his good friend Dan Hodge shares a story about him during the Butte Sports Hall of Fame banquet June 17. 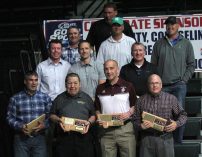 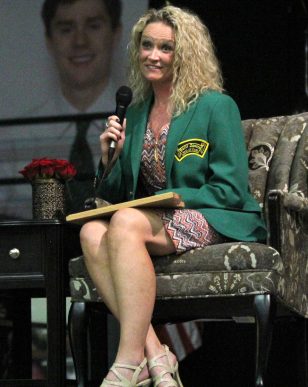 Barb Street is surrounded by her husband Jim, son Jason and granddaughter Brooke as she speaks on behalf of her son Randy. 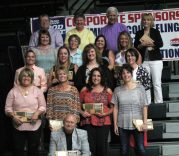 DeVore was first up, and he joked with some former Butte Sports Hall of Fame teammates from the 1976 Montana State national championship football team.

“They’re in the Hall already,” DeVore said of the likes of Paul Dennehy and Dan and Don Ueland. “I guess they saved the best for last.”

Like the rest of the class, DeVore said he was blown away by the Hall of Fame weekend.

“How can you beat this?” he asked.

“This is the most amazing show that I have ever been involved in,” said Eric Dunmire, a four-time high school state wrestling champion who followed DeVore.

Dunmire, who never lost to a Montana wrestler in high school, said he serves as an assistant coach at Butte High school because he wants to see other local wrestlers surpass his impressive accomplishments.

“I want to see somebody who can beat my records,” he said. “That’s what coaching is all about.”

“As a young kid you dream of things like this,” she said. “This has been the best week of my life. I will never forget it.”

Fabatz payed tribute to the “Green Jackets” in the crowd.

“I have a lot of heroes sitting here,” she said. “It’s just an honor to have this same jacket.”

Fabatz, who had the crowd serenade her for her 38th birthday, talked about the notion of “Butte Tough.”

“You don’t hear ‘Helena Tough’ or Missoula Tough,’” she said. “It’s ‘Butte Tough,’ and you all know what that means.”

MacDonald, who was selected as a contributor, was a member of the committee that helped establish the Butte Sports Hall of Fame in 1987. He said his selection into the shrine 30 years later was the completion of his “bucket list.”

“Picking the Hall of Fame members that first year was the easiest thing going,” MacDonald said. “Butte was known for having about 10 super-good athletes.”

When asked if he was surprised to be selected, MacDonald had a quick answer.

“Well, I know this,” he said. “I wasn’t in the company of the people who went in the first time.”

Johnston entered the Hall for his career as a wrestler at Butte Central and his many state championships in Glasgow. His son Corey is now the head coach of the Butte.

“I don’t remember losing to many Bulldogs,” Johnston joked.

Johnston also talked about beating Mark Tarr of Whitefish to win the state championship in the 1980 state tournament at the Civic Center.

“I said ‘If I pick a different weight, Sparky, I’m not a state champion.’”

Lyons, a multi-sport athlete best known for his golf game, said he was honored for his family to see him go into the Hall. Lyons’ wife, Joanie, and their three children were sitting up front.

“I think it’s so cool for my family to see this,” Lyons said. “They never got to see me play or do anything, but they get to see the residual effects.”

Lyons said his most memorable accomplishment was, at the age of 39, winning the Montana State Amateur championship at the Butte Country Club.

Hodge, who followed stellar careers at Butte High and Montana State with a legendary track coaching career in Kalispell, sent the crowd into stitches with a story about his former coach and longtime friend Charlie Merrifield.

Merrifield once set up the track at Naranche Stadium, and Hodge was clocked in the 120-yard hurdles in 13.9 seconds. That would have been a national record.

Merrifield, though, measured the track 10 yards short and with nine hurdles instead of 10.

Hodge said it was quickly pointed out that Merrifield was a math teacher.

Hodge said Merrifield was one of the many people who helped him on his way to the Hall of Fame.

Petroni, who was a world-class trap shooter, said he felt kind of out of place alongside so many athletes who were part of a team.

“It’s a great honor,” Petroni said of joining the Hall. “I feel very humble. It’s amazing that I’m even in it, I think. I feel very honored to be here.”

Toivonen said she spent a lot of time checking out the Hall of Fame monuments in the Civic Center lobby.

“Seeing all those people who came before us is just surreal,” she said.

A night earlier, Toivonen presented the green jacket to Fabatz, who called Toivonen her “idol.” Toivonen was a couple of years ahead of Fabatz at Butte High school.

“What she didn’t know was she was one of my idols, too,” Toivonen said. “For me to be able to do that was just amazing.”

The night ended with Randy Street, whose Butte High wrestling singlet and warmups and NAIA national championship jacket were draped over the empty chairs used for the interviews.

“When you lose a child, all you have is memories,” Barb Street said. “We had some great memories with Randy in his athletic abilities.

Mrs. Street shared some memories of her son in and out of the athletic arena before offering a toast.

“Tonight’s for Randy,” she said. “To our friends and family out there, raise your glass. This is for Randy. He’s our hero, he’s our son, and he’s our friend. And, boy, do we miss him.”

The next class of the Butte Sports Hall of Fame will be inducted in June of 2019.