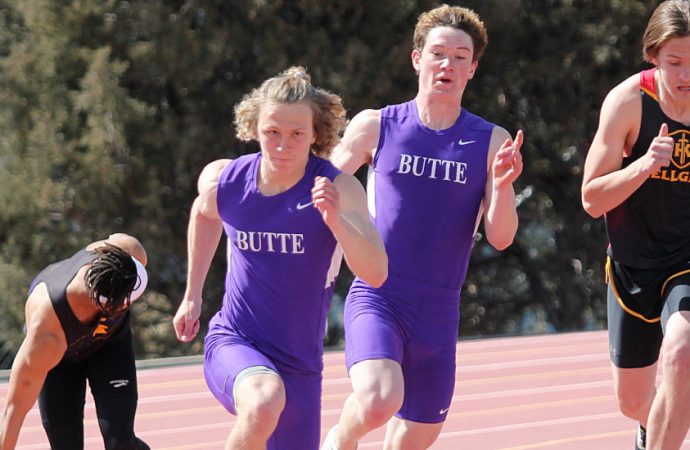 Butte High's Josh Neil takes off for the final leg of the 400-meter relay Friday as teammate Tommy Mellott delivers the baton at the Dahlberg Invitational on the Charlie Merrifield Track. (Bill Foley photo)

Snow melted before the meet while times did during it. Distances, leaps and throws sparkled into the sunshine, too, as the afternoon temperature reached 70 degrees. Wind was only a minor annoyance at Bulldog Memorial Stadium.

Missoula Sentinel edged Billings West by three points, 87 to 84, for the team championship and host Butte High improved its standing to a tie for fifth place from last year’s 11th. Defending champion Flathead of Kalispell finished down in the pack. It was a 14-team field of all the state’s Class AA boys’ teams. Class A Butte Central Catholic, a usual entrant, abstained to recognize Good Friday.

“What I liked best was the weather,” Butte High head coach Arie Grey said with a wide smile. “And, we competed. The weather didn’t matter. We competed. We finished the day like that with that relay.”

“That relay” was a second-place finish in the 1,600-meter-meter team race. The quartet of Tommy Mellott, Jake Vetter, Tucker Winston and Quinn Sullivan pushed speedy Billings West throughout the race with strong efforts throughout. Only 54/100ths of a second separated at the tape, Billings West winning in 3 minutes, 30.30 seconds.

“We need to work on some exchanges,” Grey said. “We can clean up some stuff and we’re right in the thick of things. Handoffs are hard to practice when it’s not live.” 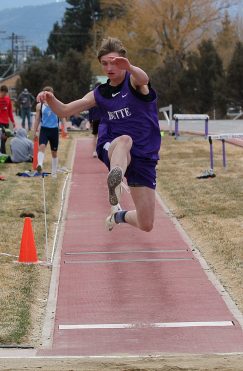 Butte High’s Josh Neil takes off for the final leg of the 400-meter relay Friday as teammate Tommy Mellott delivers the baton at the Dahlberg Invitational on the Charlie Merrifield Track. (Bill Foley photo) 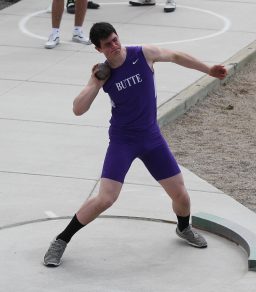 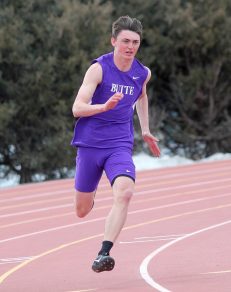 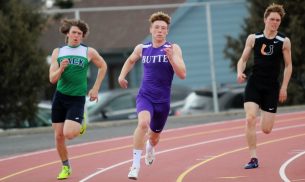 Butte High’s Tucker Winston comes out of the corner on the 200 April 19 at Bulldog Memorial Stadium.. (Bill Foley photo) 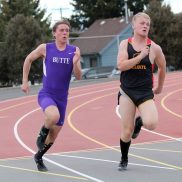 Trying to do it in a gym due to actual snow footage in the stadium complicates it even more. So, the Bulldogs went live with the event Friday, on a sunny day across a dry track. Possibilities glowed.

“Tommy had a nice day,” Grey added and referenced Mellott’s win in the long jump and runner-up finish in the 200-meter dash as well as blazing through his relay leg.

Mellott clocked 22.65 in the 200 and soared 21 feet, 4 inches in the long jump. His win in the jump was by a quarter-inch over Gabe Longin of Great Falls High.

“I had seven straight scratches until today, and scratched again on my first one today” Mellott said of his attempts to post a distance in the couple of earlier meets he competed in this spring. “And a quarter of an inch isn’t very much (to win by).”

He said his first mark was a 21-3 until advancing to the final flight as the No. 2 seed and then popping the 21-4. Conditions, more than technique or positioning were more important factors, the junior athlete said. He related that the inability to practice outside and then having to battle strong winds in a Great Falls meet delayed his finding a place to start. However, no adjustment was necessary once the sunshine arrived.

“Going into today I felt like I was behind,” he said. “There was a little bit of a sense of urgency. I was concerned about my long jump.”

He liked where he found answers.

“It was a beautiful day, today, and this is a serious meet,” Mellott said. “All the Double-A teams are here. You see where you’re at and where you need to improve.”

He liked what he saw as he scoured the oval, too.

The stadium is located in the Gene Fogarty Sports Complex and houses the Charlie Merrifield Track. Mellott is Fogarty’s grandson and Zach Merrifield is Charlie’s.

Vetter’s day included a fourth-place finish in the 800 in a time of 2:02.86. The Bulldogs also got a runner-up performance from Sullivan in the 300-meter hurdles, timing 41.96. It was a bounce-back from the 110-meter high hurdles where Sullivan found his pacing wrong and wound up having to push over his last hurdle with his hands to avoid becoming entangled in it and risking injury. He was disqualified from the preliminary heat. Sullivan was racing among the leaders at the occurrence.

Grey lauded the athletes for performing well on the day.

“Tommy had a nice day, and Josh Neil and Quinn,” the coach said. “How about Zach Merrifield sneaking in there? We had a lot of season-bests and personal bests. We just have to keep getting better. We’re at the midpoint of the season, but not the midpoint of our events.”

Merrifield, a sophomore, placed sixth in the 200 in 23.60 and finished eighth in the 100. Aidan Pezdark had an eighth in the triple jump. A zone violation disqualified the Bulldogs’ 400-meter relay team.

Billings West speedsters won both relays, and individual double-winners were Jaden Foster of Sentinel in the 100- and 200-meter dashes, Ben Perrin of Flathead in the 1,600- and 3,200-meter runs and Brandon Spencer of Sentinel in the shot put and discus. Rylan Ortt of Sentinel posted one of the meet’s more remarkable distances with a throw of 200-10 in the javelin. The meet record is 202-0 by Nick Lam of Billings Skyview in 2006.

Two other entrants also threatened meet records. Skyview’s Julius Mims missed trying to clear 6-11 in the high jump after winning the event at 6-6. The meet mark is 6-10 1/4 , by Mark Koefelda of Missoula Hellgate in 1993. State record-holder Troy Tintinger of Helena High was held out of the meet because of injury, it was reported. Jon Tripp of Billings West won the pole vault at 14-6 and attempted 15-2 for a state record. He missed, coming closest on his last try when he accidentally kicked the bar off the standard during an ascent that looked it might give him a chance. The Dahlberg record is 15-1 by Todd Foster of Helena High in 1988.

Some Butte High athletes will compete in the Western Montana Top 10 Meet in Missoula on Tuesday and some will vie in the annual John Tomich Memorial meet next Saturday at Bulldog Memorial Stadium.

“Some guys will get a chance to get better twice next week,” Grey said. “Some, once.”