Jed Fike might be the surprise of the season for the Montana Tech football team, if not the entire NAIA.

The running back has taken the Frontier Conference by storm while cushioning the blow from the loss of All-American Oredigger Nolan Saraceni to graduation.

Heading into the eighth game of the season Saturday at home against Rocky Mountain College, Fike already has nearly 1,100 yards rushing, and he has put Oredigger record holders on notice.

“He’s got a unique combination of power and speed,” Tech coach Chuck Morrell said of his newest lethal weapon. “It’s one thing to deal with speed. At times you can be physical with just speed. When you’ve got power and speed, that can present problems.”

Fike is the reigning NAIA Offensive Player of the Week after putting up 281 total yards and four touchdowns on just 13 touches on Saturday. That’s an average of 21.6 yards per touch.

Don’t include Fike among the surprised by his breakout season, however. To the sophomore running back, this success has just been a matter of time.

“It’s not surprising to me, but it feels great that it’s real now,” Fike said before taking the field for an early-week practice. “It’s finally real. It’s finally happening.”

Fike has only been an Oredigger since January, but he hit the radar of Oredigger fans last Nov. 19.

That was the day that Fike and the Dickinson State Blue Hawks gave the Orediggers a tougher time than expected in Tech’s 28-21 NAIA first-round playoff victory on the Bob Green Field. 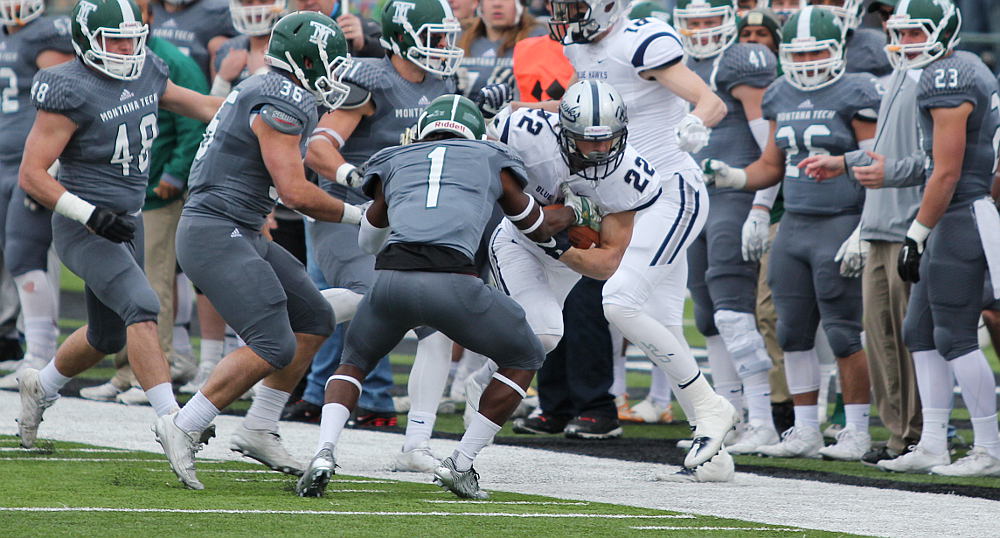 Dickinson State running back Jed Fike put up 183 total yards and two touchdowns in a 28-21 loss to Montana Tech in Butte. Here he is getting forced out of bounds by Tech’s Andre Brown (1) and Nic Amestoy (36) in this Nov. 19, 2016 photo.

With Fike red-shirting, the same two teams met on the same field in the same round of the playoffs the year before. On that day, Tech won 44-10 in a game that was not nearly as close as the score indicated.

Tech, and its vaunted defense, expected to do the same to the Blue Devils in 2016. But Fike twice burned an unburnable defense for long touchdowns to get Dickinson in the game to stay.

He ran 143 yards on 14 carries against the Orediggers. That included a 67-yard touchdown. Fike also caught a short pass and turned it into a 43-yard score.

The next day, while the Orediggers were making travel plans to Georgia for the second round of the playoffs, Fike was making plans to become an Oredigger.

“I emailed coach Morrell the Sunday after the game, and he gave me coach (Pete) Sterbick’s number,” Fike said, referring to Tech’s offensive coordinator. “I called Sterbick, and that was basically the end of story.”

Fike said he was basically treating the playoff game as an audition.

“I had it in mind because I knew Nolan was leaving and I knew there was going to be an opening,” Fike said. “I knew I had what it takes to come here and play and make a name for myself.

“I came in here laser focused,” he said. “I knew I wanted to come play here, and coming here (for the playoff game) really sealed the deal. The atmosphere was just unreal, and coming home and seeing the mountains, just the vibe for me made me feel fantastic. I just couldn’t resist coming here.”

The homecoming has clearly worked out well for Fike and the Orediggers.

“He’s been a tremendous fit here for us,” Morrell said. “He cares about his teammates. He cares about the guys around him. He really prides himself on being one of the guys, and people really respond to him by the way he operates.” 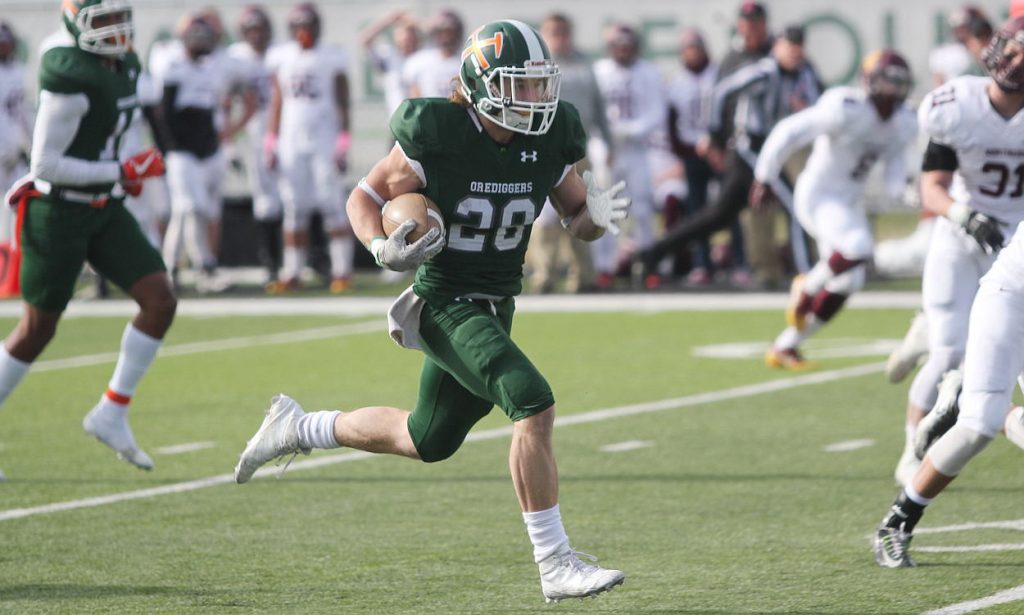 Jed Fike heads to the end zone on a 52-yard touchdown run in Saturday’s win over MSU-Northern.

The thing is, Fike should have already been a household name in these parts. After all, he played his high school football just over the hill in Whitehall.

It was an unlucky turn of events, however, that kept him under the radar.

Fike, who was a backup running back as a junior, broke his leg early in his senior year.

“I really didn’t play much my junior year,” Fike said. “Then senior year I got the spot, and I broke my fibula bone in my left leg.”

Since the fibula is the smaller of the two lower-leg bones, Fike was able to rush back after missing just four or five games, but he wasn’t as good as he wanted to be.

Fike figured his senior year would be when he got the Montana Grizzlies and Montana State Bobcats to come calling.

“I was desperate to play, and it really didn’t go well. I tried to finish out the senior year, and I tried to get looks from bigger schools — from MSU and Missoula. I wanted to play for one of those teams, but it wasn’t enough.”

While casual fans and the bigger schools didn’t notice Fike, Morrell sure did. He knew the running back because Whitehall is a fixture at the Oredigger team camp every summer.

Morrell wanted Fike to be an Oredigger.

“We were very much familiar with him,” the coach said with an understating tone.

Fike, however, chose Dickinson State for a couple of reasons: He wanted to experience life farther away from home, and he wanted to run track.

“It was between here and Dickinson, my decision,” Fike said. “I chose Dickinson because I wanted to get away from home and see other parts of this country. I just wanted to see what it was like, and I just didn’t like it.” 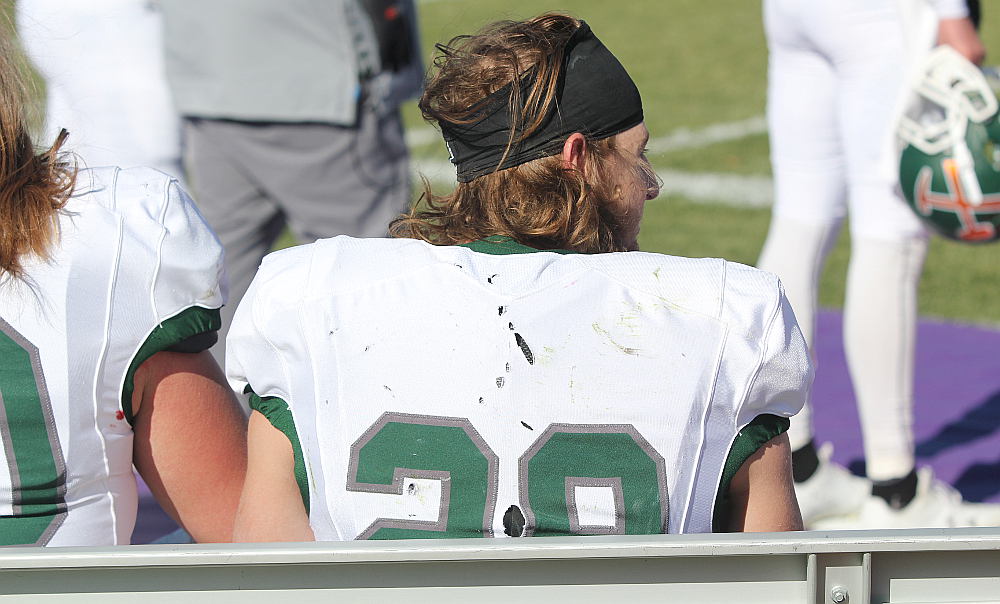 By his fourth road game, the hard-working Jed Fike looks about ready for a new white Oredigger jersey. Here he is on the sideline of Tech’s Oct. 14 win at Carroll College.

Fike has no shortage of role models. They range from former Dickinson State teammate Trey Boone to Saraceni, to his half-brother, to his father.

Together, those influences helped Fike develop a mindset that he is going to try to work harder than anybody else. During breaks in practice, he can usually be seen doing leg lifts or other exercises — usually working on his abdominal muscles.

“I like to stay balanced because my back sometimes gets sore from running so much,” Fike said. “The key is balance it with your abs. If you do a lot of running, your back gets strained. If you work your abs, your back pain goes away.”

Morrell said Fike’s determination is off the charts.

“He certainly is a big-time work ethic guy for us,” the coach said. “His leadership style is, ‘I’m going to outwork everybody, and I’m going to show you leadership by the way I operate on the field.’

“He’s always finding a way to improve and get better.”

Fike said he learned a ton about playing running back from Boone, the former 5-foot-9, 150-pound running back who made SportsCenter in 2015 with a flip over defenders into the end zone. 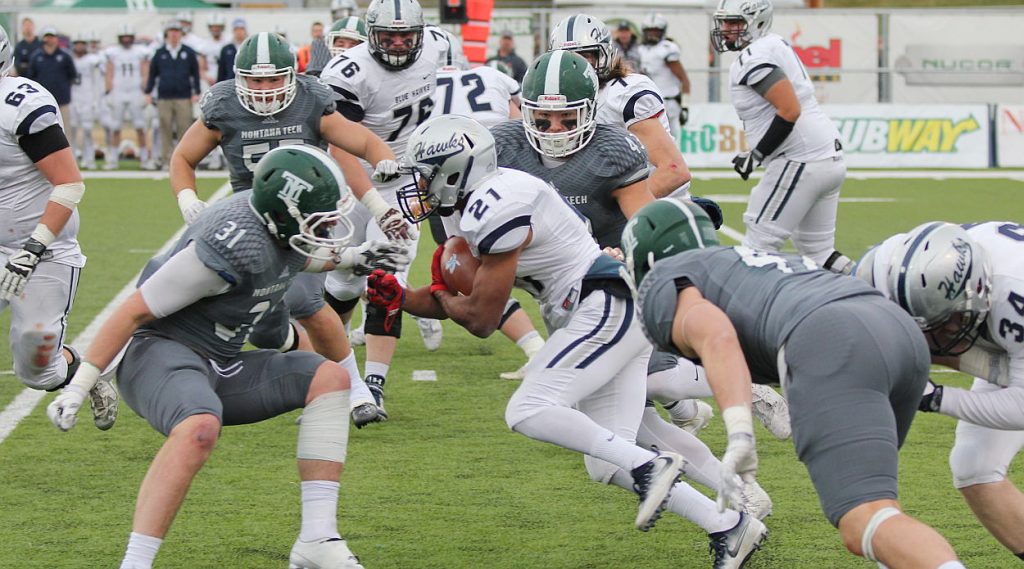 “He’s a big reason for my success today, Trey Boone,” Fike said of the example Boone set. “He helped me get the skill sets to play running back.”

“His work ethic is unreal,” Fike said of Newman, one of Fike’s seven siblings. “He was a Green Beret, special forces. He has a lot of skills. He can do just about everything. I really look up to my brother. I would never be where I am today without his help, without his influence. He’s just a hard-core dude who can do almost anything.”

Fike’s father, Kenny Fike, is a 78-year-old retired Marine who wouldn’t dare miss one of his youngest son’s games.

“I’m basically all he lives for,” Fike said of his father. “He’s getting up there in age, and he says I’m all he has left. That makes me feel really good that he’s on my side like that.

“Sometimes I feel under pressure about it, but I’ve got to remember that he worked really hard all his life, and he’s really proud of me,” Fike adds. “I’m kind of following in his footsteps and excelling even more than he did in football.”

Where did he come from?

If you ask Jed Fike where he is from, get ready for a long answer.

Fike was born in Reed Point, Montana, but he moved to a small town in Wisconsin, where his mother is from, when he was only 4 years old.

When Fike was in seventh grade, he moved to Whitehall, but quickly transferred up Highway 69 to Boulder. He stayed in Boulder until he was a sophomore, then he transferred to Harrison.

In football, Harrison co-opts with Whitehall, so Fike became a Trojan.

When he left Montana again for Dickinson State, Fike stayed in North Dakota for three semesters. He red-shirted in football and track, running in a few meets as an unattached athlete.

Fike just missed qualifying for the NAIA National meet with a triple jump of 46 feet, 3 inches.

His main love, though, was football.

When Fike was a senior in high school, Montana Tech went 1-9 and finished dead last in the Frontier Conference. In 2015 and 2016, the Orediggers won 10 games and captured the league crown.

When he saw first-hand just how good Morrell’s team had become, Fike figured it was time to give the Orediggers another shot.

Montana Tech receiver Will Hunthausen (12) and Jed Fike go “uptop” after Fike caught a 45-yard touchdown pass in the second quarter in Tech’s Aug. 31 win over Carroll College in Butte.

‘I wanted to be good at football’

For years, Fike wanted to be a football star, and his desire wasn’t like a just a normal boy with a Nerf football.

“Since I was 8 years old I wanted to be good at football,” Fike said. “When I was 14, I said I wanted to play college football, and I knew I was nowhere near that. So my dad trained me for basically all my high school years.”

Fike weighed just 110 pounds as a freshman. Thanks to his father’s knowledge on nutrition and hard work, he weighed 170 points by the time he graduated from high school.

Now, the business information technology major who plans to open his own gym someday is 5-11 and 195 pounds. That’s 195 solid pounds.

“I put everything else aside and focused on getting big,” Fike said. “I was 110 pounds, so I had to get in the weight room and really gain muscle to play at the college level.”

Fike is still working hard to improve his game.

“I don’t have that breakaway speed Nolan has, but I’m trying to work on it,” he said. “I use my agility for my strengths. My start and stop time is pretty good.  I’ve got to focus on my top end speed and pulling away from people.”

Morrell said because of that attitude he thinks Oredigger fans are only seeing a glimpse of how good Fike will be.

“He absolutely has not reached his full potential,” Morrell said. “When I see a guy put in that much extra effort, I know he is undoubtedly going to get better.”

Fike’s potential has always been there. It just took time for people to see it. Even after he ran for 898 yards for Dickinson State last year, Fike faced questions.

“Before the season started, people were asking me if I was going to get some playing time and all that,” Fike said. “I secretly thought to myself, ‘You don’t even know how good I’m going to do.’”

Fike used those questions as fuel. Now, 1,385 total yards for the Orediggers later, everyone can see what Fike knew all along.

“It really drove me to show people how good I really am,” Fike said. “I’ve been preparing for this season basically all of my life.”