Cole Stewart sits between his parents, Eddy and Heidi, after signing with Montana Tech’s football team Wednesday morning at the Richardson Gym. Stewart’s sister Brityn, a freshman at Butte High, is also pictured.

The signing, which came as he was surrounded by his parents, Eddy and Heidi, and his sister, Brityn, came three months and one day after Stewart announced on Twitter that he picked the Orediggers.

The delay was not the result of some second thoughts or indecision. Rather, Stewart wanted to sign with his good hand.

Stewart underwent surgery to repair his injured right shoulder shortly after Butte High’s season ended, and it took some time for him to be able to sign his name properly again.

“I don’t know about nice, but it was good enough,” Stewart said after signing with family, coaches from Butte High and Montana Tech looking on with about 30 Bulldog teammates.

Stewart said he was excited to finally make his commitment to the Orediggers official. Having so many teammates there to share the moment was even better.

“It’s super sweep,” Stewart said. “Here everyone’s got your back.” 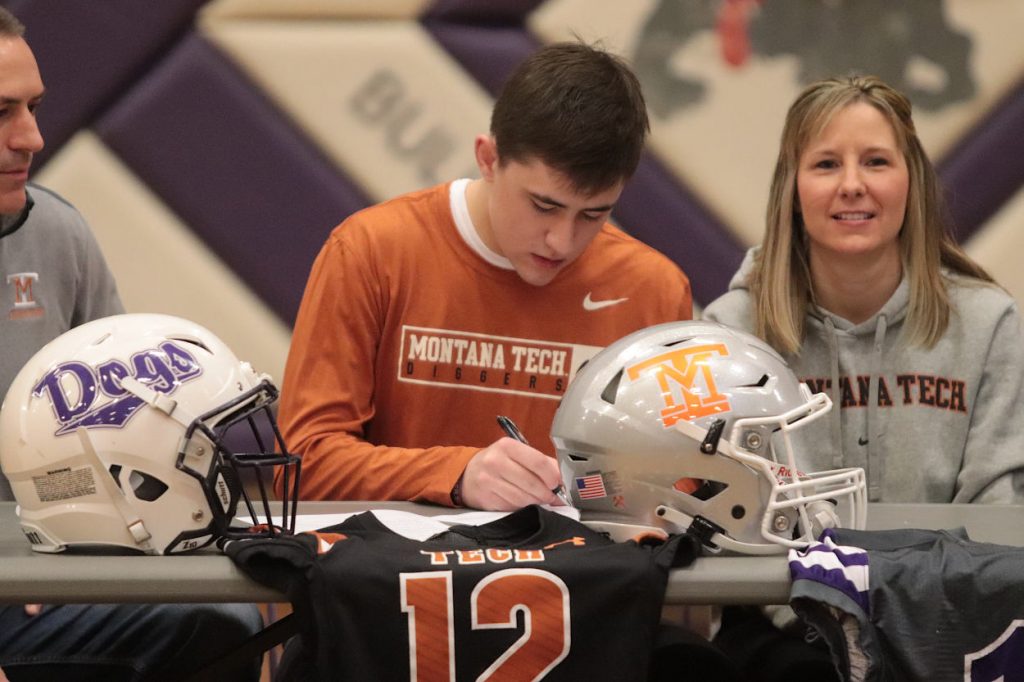 Stewart uses his good hand to sign with the Diggers.

The signing comes after Stewart, who played safety, finished second on the Bulldogs with seven total tackles — even after missing two and a half games with the shoulder injury.

“He’s one of the toughest kids in the state,” Montana Tech coach Kyle Samson said. “We had him in our camp last summer, and he was one of the top DBs.”

Samson said Stewart’s toughness was just one of the things he liked about him.

“Talking to Coach (Arie) Grey throughout the process, and he told me he’s absolute top five leader he’s coached here at Butte High,” Samson said. “There’s been so many great kids coming through this program.

“Just talking to his teammates and people around town, there is now doubt who the leader is. That’s a big deal. He’s going to be a heck of a football player, a heck of a safety for us.”

Grey, who completed his 14th season with the Bulldogs last fall, said Stewart is a “team-first guy.” The coach pointed out that Stewart moved from offense to focus on defense because that was where the Bulldogs needed him.

The coach also said that Stewart took charge of the team immediately after his junior season ended. He organized workouts and made sure his teammates were doing the right thing, Grey said.

“You look at what Stewie has done for or program, it’s been pretty cool. It’s pretty special,” Grey said. “He’s an attention-to-detail guy that works hard. He’s a great leader, and kids respond to him.”

Stewart’s injury came in the first half of Butte High’s Oct. 1 home loss to Helena Capital. Grey said his absence was obvious.

Stewart was taken to the hospital to have his shoulder put back in socket. He rushed back to finish the game on the Bulldog sideline.

As a junior, Stewart played both ways for the Bulldogs. He caught 10 passes for 95 yards and registered 16 tackles. He also lettered in 2019 as Butte High made a run to the state championship game.

Samson said he will keep Stewart at defense, and that is just fine with Stewart. He said he likes that side of the ball better.

“He’s just tough kid who really can play,” Samson said. “He’s a safety who loves to tackle, but we loved him as a cover corner, too. We’re really excited. We think this is one of the best defensive backs in the state of Montana.”

Stewart has been out of his sling for about seven weeks, and he said his arm is making progress. He said he expects to be cleared for track, and he plans to play in the Montana East-West Shrine Game in June.

Grey said he has no doubt Stewart will be successful moving forward. Stewart, whose GPA is just a tick under a 4.0, said he is leaning toward studying civil engineering at Tech.

“He’s just a tremendous young man, and I feel privileged that I got to be a part of his journey,” Grey said. “He’s going to great things in the classroom, in the community and with their football program.”