Frontier Conference schedule makers did not do the MSU-Northern Lights any favors when they scheduled them to play Montana Tech on Week 2 of the football season.

The Orediggers will be entering their home opener Saturday afternoon in an awfully foul mood for the 1 p.m. kickoff on the Bob Green Field. (KBOW Radio: 550 AM, 101.5 FM or online)

Northern (0-1), which is coming off an 0-10 campaign in 2015, comes to town as the Orediggers are still smarting from last Saturday’s gut-wrenching loss at Carroll College.

The loss was the most difficult defeat for Oredigger fans to swallow since the Marcus Miller game in November 2007. That was the game in Helena when Tech dominated the day only to lose 17-14 when Miller, who kicked two extra points and one field goal, returned a pair of interceptions for touchdowns to ruin the day.

“It was absolutely the hardest loss since I’ve been here,” said Morrell, who took over as head coach at Tech following the 2010 season.

Last week, the Orediggers led the Saints 24-10 in the fourth quarter before J.T. Linder threw a pair of touchdowns and Colter Hamel kicked a 45-yard field goal as time expired in Carroll’s 27-24 win.

“It’s really tough to swallow, and we had to deal with that over the weekend,” Morrell said. “I challenged guys that by the time we finish film review on Monday that we’ve got to put it behind us. We’ve got to leave the past and go get ready for this week.”

The best way for the Orediggers to get over the loss is to win Saturday, and win big.

Tech dominated the Lights last year, outscoring Northern by a total of 98-14 in two games. That includes Tech’s 40-0 beating of the Lights in the meeting in Butte.

Northern, however, isn’t coming to town as a patsy looking to help the Orediggers feel better about themselves. This time around, Morrell said he sees a formidable opponent in the Lights, who fell 31-21 at home to Rocky Mountain College in their “zero week” game two weeks ago in Havre. 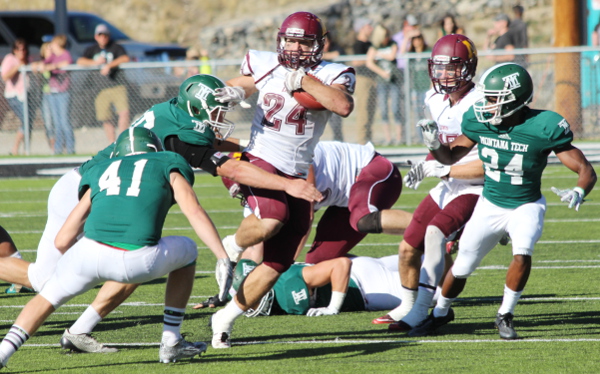 The Great Falls Russell product scored two touchdowns in the Northern opener. That gave him 33 on his career. McKinley ran for 1,162 yards on last year’s win-less team. That followed seasons when he put up 1,425 and 1,100 yards.

“I watch his level of effort on every single play, and it’s really incredible,” Morrell said of McKinley. “As just a fan of the game and as a coach, you enjoy the heck out of seeing guys like that play with that level of determination.”

Morrell marveled at the production of McKinley, even though the program went through so much turmoil during his time in Havre.

“Even with the ups and downs of their program, he’s been one of the best running backs in the league here for several years,” Morrell said. “He’s tough to get on the ground, that’s No. 1. No. 2, he’s a lot faster than people might think. He’s a bigger body, when he gets in the open field he can take it all the way.”

Morrell said film of the Rocky game shows improvement in the play of quarterback Jess Krahn. The junior QB was picked off three times by the Battlin’ Bears, but he passed for 195 yards and a touchdown — 3-yard strike to fullback Wyatt McKinlay.

“He looks a lot more comfortable than he did a year ago,” Morrell said of Krahn. “He has a nice touch on his deep balls, he gets the ball out of his hand quickly, and he’s definitely improved over a year ago.”

Another major concern is Northern’s nasty front seven on defense. That is led by Tyler Craig, a 6-2, 230-pound senior defensive lineman from Great Falls.

“Their D line is incredible,” Morrell said. “Tyler Craig, he’s been staring there forever. I’m so impressed watching him on film. There’s a lot of kids in this league who play hard, but he arguably plays harder than them all. He’s physical. He’s fast. He eats people for lunch. He is really good.

“The rest of their D line is really good too, and their outsider backers are guys who can make plays for them,” Morrell said. “Their defensive front is a very intimidating group.”

The Oredigger offense is coming off an up-and-down performance in Helena. Tech racked up 438 yards off offense, but the Orediggers failed to convert at some crucial times in the fourth quarter.

Junior quarterback Quinn McQueary completed 25 of 39 passes for 325 yards and a touchdown. His favorite target was Mitchell Keaton, who caught seven passes for 95 yards. Dion Williams caught four passes for 86.

Williams helped set up one touchdown with a leaping third-down grab. He also turned a short pass into a 30-yard TD.

Senior running back Nolan Saraceni turned out 116 yards and two touchdowns on 26 carries.

Defensively, cornerback Andre Brown registered nine tackles to lead a defense that controlled the game until a few late-game breakdowns.

Drew Schleeman, Tyler Sanders and Levi Dawes got in on sacks, Luke Benz recovered a fumble and Gunner Kayser picked off a pass and returned it 32 yards.

Tech ran 80 offensive plays to Carroll’s 55 in a game the Orediggers absolutely know they should have won. But now it is time for the Orediggers to play again without looking back.

“In the same way you move off of a win, you’ve got to move off of a loss,” Morrell said. “We still feel like we’ve got a strong ball club.”

Next week, the Orediggers will play host to Rocky.