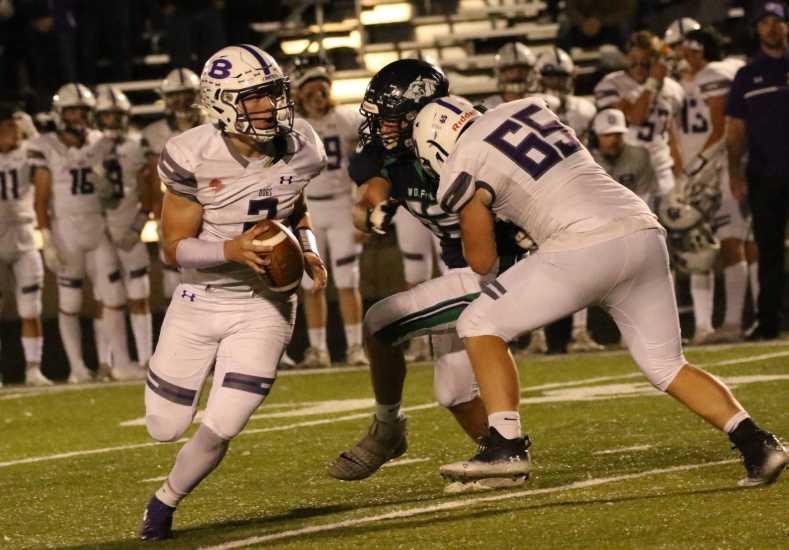 The Butte High Bulldogs wrapped up their 2022 regular season tonight in Missoula.  The Bulldogs faced off with the Missoula Sentinel Spartans who have become the Dogs rival since Butte moved back to the Western AA.  That Rivalry has created some legendary games and tonight was another one to add to the book of legends.

The game started fast after a penalty stopped the Bulldogs opening drive.  Sentinel handed the ball to Bobcat bound Adam Jones who went over the right side for 71 yards to the Butte High 12-yard line. Kallen Curtis dove in from 2 yards out for the score with 8:39 to play in he first.  Riley Allen’s pass to Sam Matosich added 2 more and the Spartans were up 8-0.

The Bulldogs wasted little time with an up-tempo offense and between quick passes and Senior Jace Stenson runs they moved down the field quickly.  The big play was a 4th and 4 from the SPARTANS 41.  Stenson called his own number following the right side of his line for 6 yards and a first down.

Passes to Hudson Luedke and Cade Stajcar took the ball to the 8yd line where Trey Hanson took a hand off from Stenson in from there and a Tyler Duffy kick made it 8-7.

The first play after the Bulldog kickoff was a hand off to Jones who sprinted 65 yards to pay dirt and the Spartans were once again up after the failed 2-point conversion the score was 14-7.

The Bulldogs drove down to the Sentinel 10-yard line before JJ Dolan fell on a Stenson fumble giving the ball back to Sentinel.  The Bulldog defense stiffened and as the second quarter started they forced a Sentinel punt.

Once again, a Bulldog drive was stopped when Karsen Beitz stepped in front of a Stenson pass and returned it to the Dogs 36.  The defense got the stop and on 4th and 3 from their own 17, tackled Spartan quarterback, Riley Allen, for a 3-yard loss.

The offense went to work with passes to Battermen and Stajcar and a pass interference in the end zone put the Dogs on the 9-yard line first and goal.  Stenson took it in from 2 yards out with thirty-three seconds left in the first half and Duffy’s kick tied the score at 14.  Stenson finished the game with his best rushing numbers of the year carrying 23 times for 154 yards and that score. Trey Hansen added 60 yards on 16 attempts and another touchdown.

The Spartans started the second half with the ball and found themselves facing a 3rd and 8 from their own twenty.  Riley Allen who had only attempted 3 passes in the first half, hit Beitz on a post pattern for an 80-yard score.  The extra point made it 21-14 Spartans.

The Bulldogs answered with 7:54 to play in the third when Cameron Gurnsey out jumped two Sentinel defenders in the end zone and came down with the ball for a 17-yard score tying the game once again at 21.

Just 22 seconds later, after 2 Bulldog penalties and 20-yard pass play, the Spartans went to the air again with Allen finding Danny Sirmon on a 32 yard hook up.  The kick put the Spartans up for good at 28-21,

The next four possessions didn’t go the Bulldogs way as they turned the ball over on downs leading to three Spartan scores.

The Dogs faced fourth and 3 on their own 41 and came up a yard short turning it over to Sentinel.  The Spartans scored seconds later on a Curtis 13 yard run to move the scoreboard to 35-21.

The following possession Stenson scrambled for 11 yards and was reaching for more when the ball was knocked loose.  The Spartans recovered on the Dog 41 and looked to be set to add to the score.  An attempt at a double pass play saw the first backward pass hit the turf and Taylor Parks was there to recover it for the Bulldogs.

The Bulldogs, for the third time in the quarter, faced a fourth down and 1 .  The quarter ended before the Dogs could make the attempt for a much needed first down at their own 39-yard line.  The first play of the fourth saw Stenson’s pass fell incomplete and Sentinel had the ball in Bulldog territory.

The Spartans were facing a fourth and one of their own on the Butte 30 when they went back to Jones on a reverse and he went down the Bulldog side line for a 30-yard score with the extra point the Spartans had doubled up the Dogs 42-21.

The never quit Bulldogs got the ball back and right away moved it to the Sentinel 21 thanks to a 33-yard grab by Gurnsey.  The Bulldogs again found themselves in a 4th and 6 from the home teams 16-yard line and could not convert. Stenson threw for 227 yards and one score, Luedke had 5 grabs for 67 yards, Gurnsey pulled down four for 65 and a score, Stajcar 4 for 40 and Battermen 3 for 32.

Two plays later Jones ended the scoring on a 79-yard TD run to finish the night with 280 yards on 15 carries and 3 touchdowns.