The body of Sam Papich rests in a nondescript grave in the Mountain View Cemetery in Butte.

After his days as a Bulldog, Papich played football at Northwestern University near Chicago. In 1935, the lineman helped the Wildcats knock off Notre Dame in South Bend, Indiana.

Papich went on to a 29-year career as an FBI agent. He worked just below FBI Director J. Edgar Hoover. He served as a liaison officer between the CIA and FBI, keeping Hoover in the know about the CIAs collaboration with the Sam Giacana family in a plot to assassinate Fidel Castro.

While in South America during World War II, Papich encountered Japanese and Nazi spies. In 1963, Papich worked on the investigation following the assassination of President John Kennedy.

Yet, Papich was buried humbly in his hometown following that long, distinguished career that took him around the world.

You can read more about this unsung Butte native in the latest book by Butte’s Robert “Sonny” Mirich, “Ninety Years of Butte Serb Athletes.”

Papich shares the cover of the book with Phil Yovetich and Matt Vucurovich in the 60-page book that runs down more than 100 Butte athletes with Serbian heritage. Those athletes span from Eso Naranche to Milt Popovich to Bob O’Billovich to Sam Jankovich to Gary Kane to Nik Zora.

The book can be purchased for $15 at the Butte Archives, Books and Books, and Butte Stuff. It is the fourth book by Mirich, 82, a retired long-time coach and teacher in Butte. 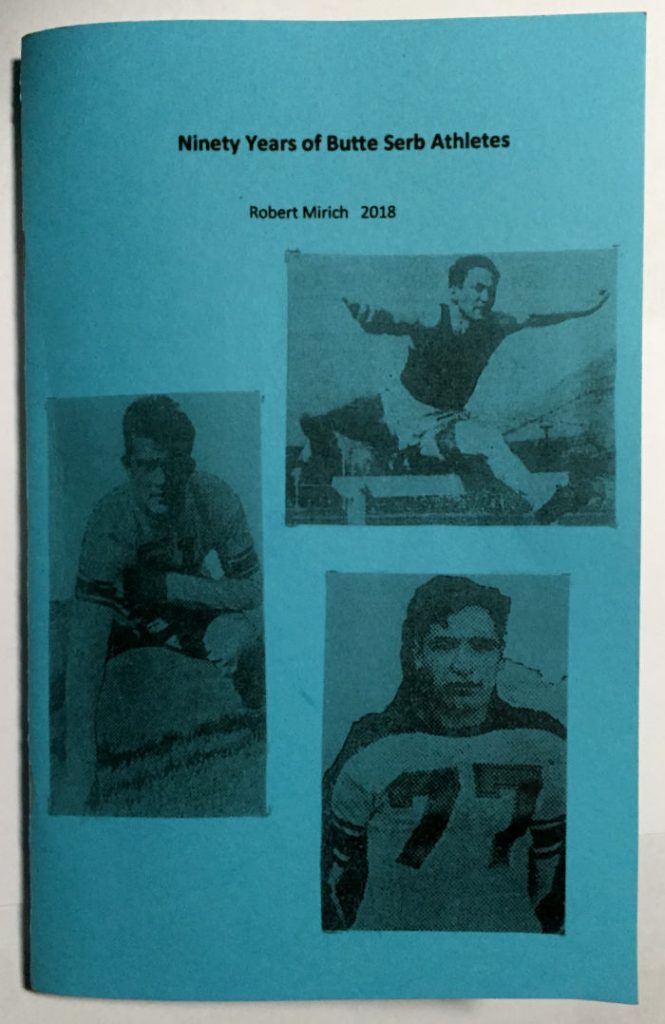 “This isn’t just about athletes,” Mirich said of his latest book. “It’s about our church. It’s about their families. It’s about what they did after they left.”

Mirich, a 1955 Butte High graduate, spent about a year working on the book, spending countless hours at the Butte-Silver Bow Archives. He credits the Archives staff for greatly aiding his cause.

“You’re not supposed to live in the past,” Mirich said. “I love the past. I don’t think I’m living in the darn thing.”

Mirich released his first book, which was about the 18 grade schools in Butte, in 2011. He drew a picture of each school in that publication.

Book No. 2 was about the local railroads. It came out in 2013. His third book, in 2015, was about churches in Butte. That book also included drawings.

His latest book includes a few photos, including an intriguing one of Butte High’s 1935 state championship football team standing on and in front of a train. Mostly, though, it is a written history featuring a lot of names we know and others we should know.

The book, though, draws a vivid history of Butte Serb families in the Mining City and more.

“There’s a lot of families in this,” Mirich said. “It is a history of Butte.”

One of the families the book mentions is the Mirich family.

While Sonny plays down his role playing sports, he mentions that he earned a letter as a senior in 1954 while playing football for legendary Bulldog coach Swede Dahlberg. Mirich played quarterback for Dahlberg’s second-to-last team.

“I think I started a couple of games at Butte High,” Mirich said. “That’s it.”

He and his wife, Rose Ann, turned out athletes in their sons Rob and Kyle.

Some families and some names clearly stand out more than others.

One name Sonny Mirich points to is Milt Popovich, who starred for the Bulldogs and Grizzlies before playing for the Chicago Cardinals of the NFL from 1938-42.

In addition to football, Mirich notes that Popovich led the Bulldogs to basketball state titles in 1932 and 1933. He also was a key member of Butte High’s 1933 state champion track team.

“He sticks out, that guy,” Mirich said.

The same could be said of Jankovich, who hired Jimmy Johnson and Dennis Erickson, as the athletic director at the University of Miami. He also brought basketball back to the Hurricanes after a 15-year absence.

O’Billovich was the highly-successful front office man in the Canadian Football League, and we all know the name of Eso Naranche, the namesake of Butte’s storied Naranche Stadium.

Naranche, a Bulldog and Grizzly football star, was killed by a German sniper in Tunisia, Africa, during World War II.

Those men and many other Serb athletes clearly left their mark on the world well beyond their playing field, court and track in Butte.

Mirich left his mark mostly as a coach and teacher, teaching and coaching many athletes mentioned in his book. He started teaching at West Jr. High School before moving to Butte High to teach science. He also coached at the elementary, junior high and high school level in football, basketball and track.

He retired from Butte High in 1988. He jokes that having nephew Gary Kane and Lance Allen in the same class drove him to retirement.

“Later I said ‘I retired from teaching because I had you guys,” Mirich said of the duo that went on to be well-known Montana Grizzlies, Allen in football and Kane in basketball.

Following his retirement at Butte High, Mirich taught a year at Bishop Gorman High School in Las Vegas before retiring for good.

Since he says his golf game fell apart, Mirich turned to researching and writing books about his hometown. He already has ideas for his next project, which will be in two or three years if he follows the same pattern.

“My wife thinks I’m goofy all of the time,” Mirich said. “It’s my hobby. I could be out drinking or playing the machines.”

That hobby made sure the accomplishments of Butte Serbian athletes have been documented for us to hand down to generations to come.

It also introduced us to some underappreciated former Butte athletes like Sam Papich.