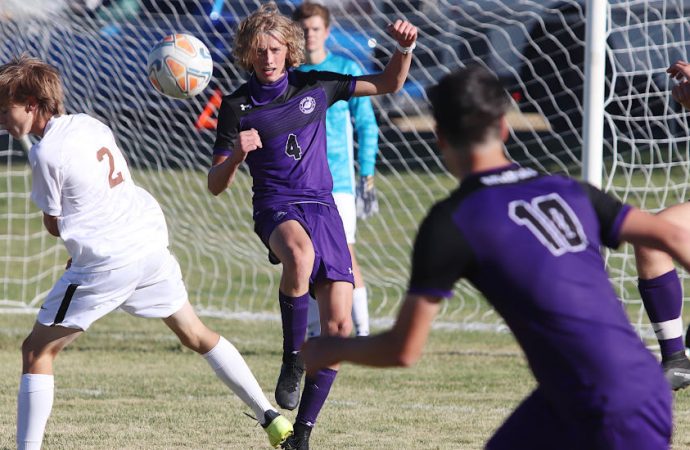 If only the Bulldogs could have played like that for all 80 minutes.

That was the prevailing thought Thursday afternoon after Butte High fell 3-1 to Helena Capital in a Western AA soccer match at the Jeremy Bullock Complex.

A slow start and a 3-0 deficit was just too much for Butte High to overcome.

“We didn’t fight enough at the beginning,” Butte High coach Cody Carpenter said. “We kind of came out slow and sluggish.”

The Bruins, on the other hand, were anything but. Capital took a 2-0 lead into halftime thanks to goals by Ethan Peterson and Eli Voss. Voss’ goal came on a penalty kick.

Tizer Kazmierowski scored eight minutes into the second half to make it a 3-0 lead.

Four minutes later, Butte High (1-5) got on the board when a deep shot by Isen Padbury sailed high and over the head of Capital goalkeeper Henry Lauerman to cut the lead to 3-1.

“He tends to do that,” Carpenter said of Padbury’s high, deep shot. “He likes to chip them over the goalie.”

“We just came out kind of slow,” Carpenter said. “You saw the energy we had after we scored. We just have to have that the whole game.”

Carpenter pointed to the play of defenders Kyler Kukay and Carson Barry in the loss.

“They’re the core of our defense,” the coach said. “They just play so hard. Just so hard.”

He also liked the game sophomore Joe Schrader played in goal again in place of Moosie Henningsen, who is working his way back form an injury. Henningsen played a few minutes in the second half Thursday.

“We’ve been working on what I call “the three P’s” — patience, passing and then keeping possession of the ball,” Carpenter said. “At times we did really, really good with that. At other times, we get too excited to go and score, especially when we’re down.”

Butte High, which played five matches in the first 10 days of September, while be back in action Tuesday against defending state champions Missoula Hellgate at the Bullock Complex.