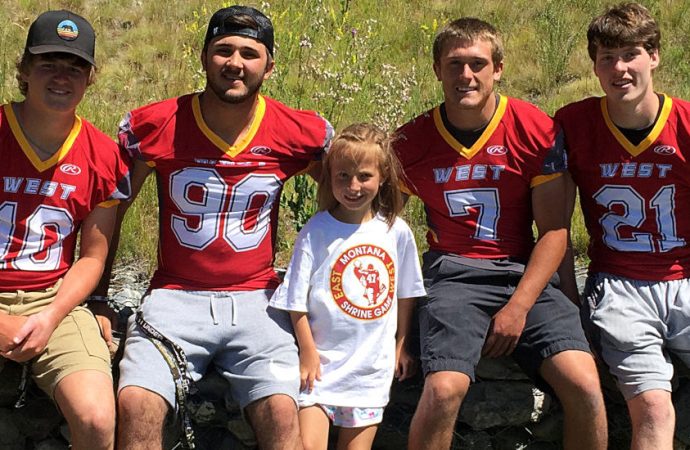 Emaline Joy Musson did not have a whole lot to say Friday afternoon as she took part in a barbecue for the Montana East-West Shrine Game at Montana Tech.

The 8-year-old Belgrade girl, though, certainly left a mark with the players on both sides of Saturday’s 73rd game.

Musson is the patient ambassador for the game. She has been receiving treatment at the Shriners Hospital for Children in Spokane.

After a lunch, the four players from Butte on the West roster got to meet, get high fives and pose for a picture with Musson. It was as if Kale McCarthy, Rylan Waananen, Clay Fisher and Cade Holter were meeting a celebrity.

As it turns out, it was even better. The four Butte players were getting a chance to meet the reason they are playing the game in the first place.

The game is played to help make sure patients like Musson and her family never receive a bill for the treatment.

McCarthy, Waananen, Fisher and Holter were also thrilled to learn that Musson is on their side as they line up to take on the Best of the East at 7 p.m. Saturday on the Bob Green Field.

“The red,” Musson said emphatically when asked which team she will be cheering for Saturday.

Before her first birthday, Musson was diagnosed with infantile spasms, a deadly seizure disorder. An MRI revealed she suffered a massive stroke shortly before she was born.

That stroke left Musson weak on her right side. Thanks to the Shriners, she is making great improvements.

“She takes piano lessons,” her grandmother Dawn Musson said Friday. “She didn’t play much with her right hind. We came over to see her recital, and I almost lost it seeing she was playing with her right hand.”

Musson’s life is a work in progress. She was fitted with a brace on her right leg at the Shrine Hospital. She goes through therapy to help her use her right hand. That is slow work with slow results.

“She does 5 hours a week of therapy,” said her grandfather, Rick Musson. “She does physical therapy, occupational therapy and speech therapy.”

Musson said she does not know what to expect in Saturday’s game.

“I didn’t play before,” she said of football. She also said she hasn’t really watched the game.

One thing will be for sure, however, the players on both sides of the field will be watching her.

They know she is the reason they are here.