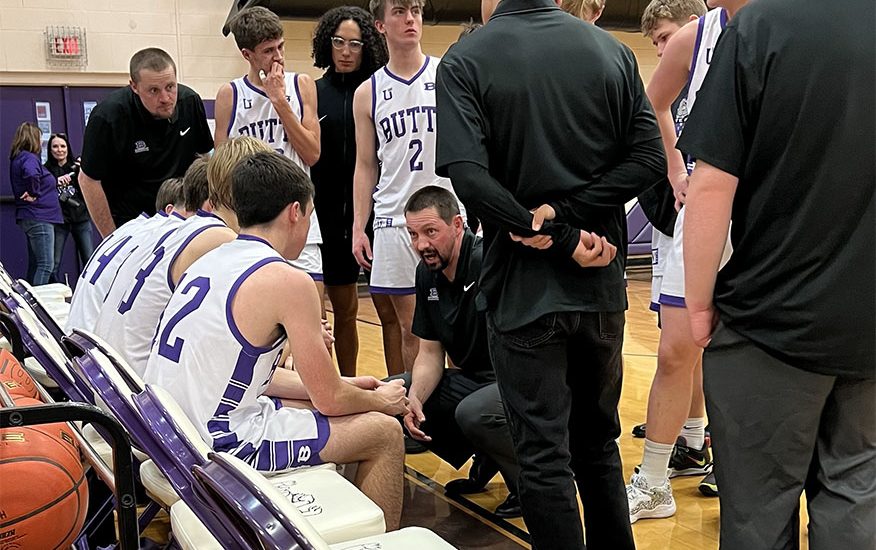 Butte High’s shooting Friday night was like next-morning pizza. It was cold, yet satisfied the appetite.

The Bulldogs lofted 72 shots into the air and made 29 percent of them during a 67-56 victory over Missoula Sentinel in a Western AA Conference high school boys’ basketball game at Butte High’s Ross J. Richardson Gym.

“We came back to earth after shooting so well against Missoula Big Sky last week,” Matt Luedtke, head coach of the Bulldogs, said. “We have to try to find ways to win when we’re not putting the ball in the hoop. We were grinding tonight. We rebounded, played defense, took some charges. Cam Gurnsey took a couple of big charges that were big for us.”

Butte High’s defense forced 29 Sentinel turnovers with 15 being steals. The stolen rebound was a weapon for the Bulldogs, swiping the ball away from a Sentinel boardman after a missed shot. Opportunities were aplenty. The teams combined for 96 rebounds. Butte High committed only nine turnovers.

“I’m proud of how our guys played because they played so hard,” Luedtke said. “They’re playing so hard right now and I think this game was our best effort.”

Oddly, the shooting was a benefit stat for the Bulldogs on both ends of the run. They tore out to a 12-0 lead to start the game with Luedtke’s son, Hudson, a 6-foot-1 freshman scoring half the points on his way to a game-high 21-point night.

Then, at the end of the fray, Butte High knocked down seven of eight free throws in the final minute to secure the win. Casey Merrifield netted four of the foul shots.

The opening hot streak started with a Luedtke 3-point basket from behind the free throw circle and he followed three minutes later with an inside hoop off a pass from Gurnsey. Jace Stenson netted two charity tosses, Tocher Lee came off the bench for a steal-and-layup play and Luedtke closed the run with a deep 3-pointer.

The physically mature-for-his-age Luedtke credited continued lifting and working out with his football teammates for developing the strength that allows him to compete muscle-to-muscle with older players in the key. He had five steals in the game, largely because of having strong hands.

His dad interjected, however.

Sentinel finally broke onto the scoreboard on an Eli Iverson basket off an inside feed from Holter Schweyen with only 1 minute, 53 seconds left on the first-quarter clock. The period ended with the Bulldogs leading by 17-6 and they were never caught.

The Butte High defense hassled the Spartans into eight turnovers in the first frame and 14 by halftime.

The Bulldog lead was its greatest at 22-6 two minutes into the second quarter after baskets by Jonas Sherman and Dylan “Bobby” Bache and a freebie made by Luedtke.

Sentinel bounced back and pulled closer, but never close. The halftime spread was 32-23 with Brady Rupert canning two 3-balls for the Spartans in the second quarter.

Both teams substituted liberally in the sprinter-paced tempo of the game.

The Spartans got their deficit down to 32-25 on a basket by Patrick Sale early in the third quarter. The Bulldogs answered the alarm. They outscored Sentinel 11-4 over the next 3 ½ minutes to open a 43-27 spread.

Sentinel was never closer than 12 points to the Bulldogs the rest of the way.

Luedtke collected 10 rebounds and three assists to go with his 21 points and five steals in contributing to the Butte High win.

“In the beginning of the year, I was just trying to figure it out,” he said about starting for the varsity as a freshman. “We have some older guys who have been and are good leaders.

“We wanted to be a little better (at the present). But, we’re figuring stuff out and hope, by the end of the year, to be playing our best ball.”

He said the opponents on the Bulldog schedule are not completely unfamiliar to him. The all-conference tight end in football said he knows quite a few of the Class AA players through having played with and against them in summer ball tournaments.

The win lifted Butte High to 4-4 overall this season and 3-2 in conference play. The Bulldogs are to play at Helena Capital on Thursday and then are to be home against Helena High next Saturday in more Western AA games.

Sentinel fell to 2-7 and 1-4. The Spartans were led by Iverson with 12 points off the bench and Butte-rooted Riley Allen with 11. Allen also brought down a game-high 12 rebounds and Sale snared 10. The Spartans are to play host to Capital on Tuesday, then go to Helena High on Thursday.