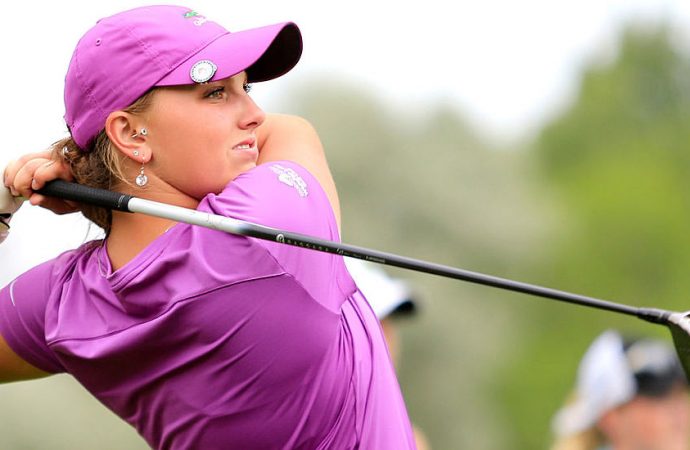 COEUR D’ALENE, Idaho — Competing for the final time in 2017-18 the Montana State University Billings women’s golf team wrapped up the season on Tuesday at the Coeur d’Alene Resort Golf Course during the final round of the Great Northwest Athletic Conference Championships. (Results)

MSUB finished with a team score of 323 on Tuesday, and finished fourth among the field of six teams with a two-round total of 645 on the par-71, 5,914-yard course.

“It was a good tournament for our women, and we played consistently both days,” said MSUB head coach Kevin Woodin. “I was proud of how hard they worked. we are going to work hard in the offseason to move up in the standings next year.”

Junior Shealyn Hafer, a Butte High graduate, had the best two-round score of her career at the event, finishing with a 153 to tie for fourth place overall. Hafer followed a 75 on Monday with a 78 on Tuesday en route to her career low. The third-year Yellowjacket had a streak of three straight birdies on Tuesday, finishing well down the stretch as she ended with a 1-over-par 36 on the front-nine. On the par-3 third hole, Hafer drained a 40-foot putt after hitting a wedge off the tee box. She followed that with a 100-yard approach shot to 15 feet on the next hole, and nailed that putt as well. Finishing off the string of birdies, Hafer hit a 102-yard shot onto the fringe on the par-3 fifth hole and made a 20-foot putt to a front-pin location.

“Shealyn had a great tournament. She didn’t strike the ball as well today and struggled early, but she got hot with that string of birdies,” Woodin said. “Anytime you can finish in the top-five in the GNAC, it is quite an accomplishment as an individual.”

Also finishing in the top-10 for the ‘Jackets was senior Sammy Walter, who finished her collegiate career with a 78 on Tuesday. Like Hafer, Walter also had three birdies on the day while shooting a 39 on each side. Walter ended up in ninth place, marking her best career finish at the conference tournament. Walter’s top birdie came on the par-4 second hole, where she knocked her second shot 165 yards to 12 feet and made the putt.

“Sammy had a nice day today, and she played extremely well both days for us,” Woodin said.

Also playing the course for a fourth and final time was senior Bailee Dexter, who finished in a tie for 20th place with a two-round total of 167. Dexter followed an 84 on Monday with an 83 on Tuesday, and had one birdie in the final round of her collegiate career.

“Bailee and Sammy have been great seniors to coach,” Woodin said. “They have played at the GNAC for four years, and we will miss them dearly both with their golfing talents and the classy manner in which they represent our school. They both did a nice job leading our younger players.”

Just behind Dexter was junior Sarah Schroefel, who had back-to-back rounds of 84 to finish in a tie for 23rd place with a total of 168. Schroefel also had one birdie on Tuesday, to go along with six pars in her last round of the year.

Rounding out the list for the Yellowjackets was freshman Renae Heisler, who shot an 86 Tuesday and finished in a tie for 25th place. Heisler saved a stroke on her second hole of the day, with a birdie on the par-5, 506-yard 11th hole. Overall Heisler finished the event with a 169, after shooting an 83 on Monday.

THE BUZZ: Hafer was named the St. Vincent Healthcare Player of the Day… Hafer’s previous career best in a two-round event was a 154 at the Rocky Mountain College Invite on Oct. 3, 2016 in Billings…Walter’s previous best score at the GNAC Championships came last year, when she turned in a two-round total of 161 and tied for 12th place.