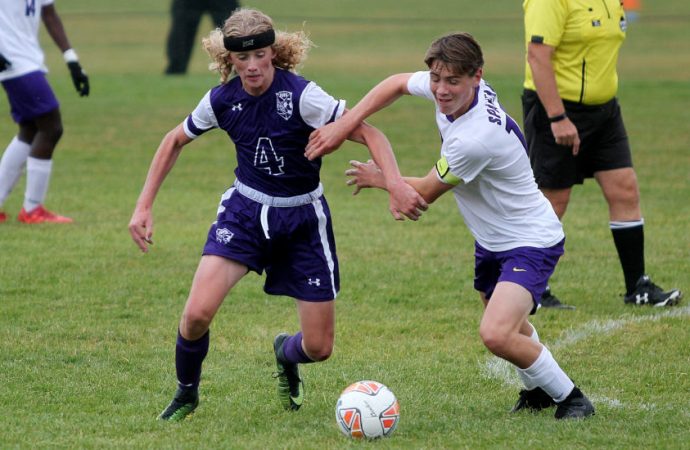 Missoula Sentinel made a fast start hold up behind four goals by Cole Reimer and three by Bryan Tower in a 10-1 boys’ soccer win over Butte High on Tuesday.

The Western AA Conference tilt was played at the Jeremy Bullock Memorial Soccer Fields in a continuous rain drizzle. The match was the Bulldogs’ home opener.

The Spartans scored three goals in the first three minutes on tallies by Bryan Tower, Reimer and Finn Krutek. They led 7-0 by halftime.

“They sure did,” first-year Butte High head Cody Carpenter remarked when it was noted Sentinel got off to a fast start. “They have some good players with their size, athleticism, speed and experience — all of those things.”

Reimer connected for his second goal in the 16th minute, then Sam Olsen scored in the 24th, and Tower netted two in a row, a minute apart, in the 37th and 38th minutes.

Almost all of Sentinel’s goals were set up well with a clicking offense fed opportunities by a stifling defense. The Spartans’ shooters kept acrobatic Butte High goalkeeper Logan Roepe airborne many instances.

Carpenter said some work on alignments and recognitions should help to bring the Butte High units along.

“The little mental lapses make a difference,” he said. “There were lots of parts where we controlled the middle, but didn’t have many scoring opportunities.
The Bulldogs also dodge the shutout. James Dare scored on a rebound near the end of the match, the last point put up in the contest. Sentinel had tacked on three second-half goals — two by Reimer around by one that Alex Levchenko tallied. The latter came in the 60th minute.

Carpenter noted some positives for the Bulldogs in their efforts.

“The way we passed it at certain times and the teamwork we put together at certain times were positives,” he said. “And, we didn’t quit. We scored the last goal, I think that was a positive.”

“They worked so hard the whole game,” the coach said.

The Bulldogs are 0-4 in both overall and Western AA play, and will play a conference game at Missoula Big Sky on Thursday.