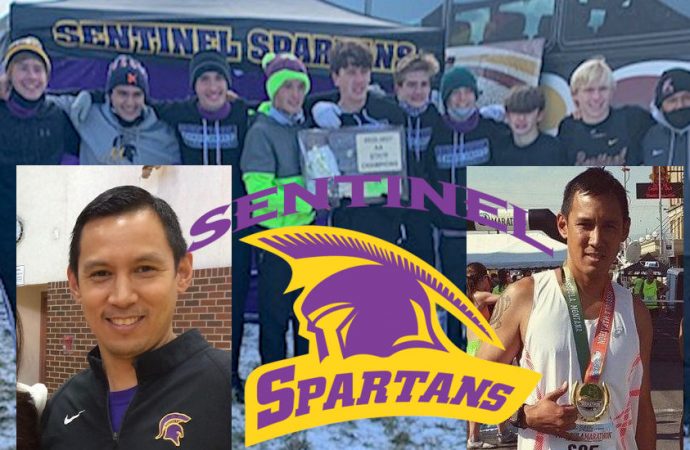 Missoula Sentinel cross country coach Diego Hammett, in black mast, is shown with his team after winning the Class AA state title Saturday in Kalispell. Below at left is a current picture of Hammett, while below left is a photo of Hammett after running the Missoula Marathon several years ago. (Courtesy photos)

Diego Hammett’s life changed forever when Charlie Merrifield called him out of class.

It was the spring of 1988, and school was not going very well for Hammett, a sophomore at Butte High School.

After his parents divorced, Hammett was living with his mother and grandmother in Butte, and his mother, Marcia, did not think he was living up to his full potential.

“I got to high school and didn’t want to do anything,” Hammett said. “Finally, my mom got fed up with it, and I wasn’t doing well in school. My mom talked to coach Merrifield. Coach Merrifield pulled me out of class and said, ‘You start track on Monday.’”

As of Saturday, 32 and a half years after his hallway conversation with Merrifield, Hammett is a state champion. The 1990 Butte High graduate is the head coach of Missoula Sentinel, whose boys’ team captured the Class AA cross country title in the snow and ice of Rebecca Farm in Kalispell.

The Spartans edged Missoula Hellgate and Bozeman in a close race that was run in brutal conditions. It marked the first time anyone has beaten the Hawks at State since 2007.

“That’s incredible,” Hammett said of the Bozeman dynasty that was interrupted. “I remember when I was running. They talked about Browning how good they were back in the day with all their titles. And with Butte High wrestling. You don’t see that anymore.”

Sentinel scored 59 points in the win. Missoula Hellgate finished second at 67, with Bozeman on the heels of the Knight with 69.

The win, which came in Hammett’s sixth year as the coach of the girls and boys at Sentinel, came after the Spartans placed third in 2019.

“We pretty much had our whole team coming back from last year that got third,” Hammett said. “It helped that we got a kid from Denver that transferred in. He was all state in Denver.”

The 48-year-old Hammett, who started coaching the girls’ team at Sentinel in 2009, is soaking in the title. He also already has an eye on defending it.

“I’m still kind of on a high,” he said. “I’ve actually been thinking about next year and how I’m going to approach the team. We lose two and bring five back. The two we lose are All-State.

“I have a really good JV team. So, it all depends on how hard they work during the summer. It’s all based on what you do in the summer. We’ll give it a good shot. We’ll have a target on our back.”

When he was finishing his education degree at MSU-Northern, Hammett started his coaching career as an assistant in Harlem, which is where he was living with his mother at the time.

“That’s something I always wanted to do,” Hammett said. “I got my foot in the door.”

He has been pretty much coaching since, making stops in Lame Deer, Harlem again, and Browning.

Hammett and his wife Melissa moved to Missoula in 2005. He completed his master’s degree and got a job teaching at Chief Charlo Elementary, where he still teaches physical education.

By all measures, Hammett’s career has been a success, and all of that just might be tied to that forced meeting with Merrifield, Butte High’s legendary track coach who continues to coach well after his official retirement.

“Marcia, his mother, came and asked me if I would try and get him out and I went after him,” Merrifield said. “I could see that he needed something and hoped we could get it to him. He turned into a fine gentleman.”

The fit seemed to work quickly as Hammett showed that he could really run.

“He just needed a little bit of guidance and boy did he turn out to be a good one,” Merrifield said. “Every time I see him, I’m awful proud of the kid.”

That makes Hammett one of only 23 Butte High boys to ever finish in the top 15, which is now the measurement of All-State.

The next year, Hammett was even better. He placed second overall with a time of 15:35, finishing 25 seconds behind champion Jason Surratt of Billings West and 5 seconds better than teammate Tyler Welt, who placed fourth.

“Once he decided that he wanted to be a runner, yes he was great,” Merrifield said. “He needed a little bit of direction. The coaches know better than what the quality of what the kid is, and he was a good one.

“Every time I see him, I am thankful I was able to get to him. He was a good track man and a great cross country runner.”

“I’ve got that Pacific Islander slash Native thing going,” he said with a laugh.

Whatever the reason, Hammett was a natural when it came to running. He was recruited to run at Montana State University, but did not decided he was going to compete at the collegiate level until late in the spring of his senior year. He said he considered joining the military like both of his parents.

Then his father, Diego Sr., told him, “If you have a chance to go to college, go.”

With that, Hammett accepted a scholarship to run at North Idaho Community College in Coeur d’Alene, Idaho. He ran for a year and a half for the Cardinals before losing his scholarship.

“I made some poor decisions in college and ended up getting my scholarship take away,” Hammett said.

That is an experience that Hammett now uses to teach his current students. He wants them to learn from his mistakes.

“I’m straight up with them,” Hammett said. “I tell them if I could go back and do it again, I would. Partying in college wasn’t the way.”

Hammett, who has seven children with his Melissa, clearly moved on from that moment, earning two degrees before he settled down in Missoula.

At one point, he even passed on the chance to return to the Mining City.

At a State track meet one year, Hammett was sitting with then-head track coach Dane Oliver when he saw Merrifield and his son, Chuck, Butte High’s activities director.

He took the offer home to tell his wife, who was not keen on the idea of moving from Missoula.

“That was always one of my dreams was to come back to Butte High, but my wife shut down that down,” Hammett said. “I still get over there as much as I can to do some sportsy things.”

Even before the state title, Hammett did not regret the decision to stay in Missoula. Actually, if he could do anything over, Hammett said he would start running cross country and track much earlier at Butte High.

“I wish I could go back and run all four years, but it is what is,” he said, adding that his days running in high school have led to a life-long love of the sport.

It is a love that he is thrilled to help hand down to the younger generations.

“I love that about our sport,” Hammett said. “I’ve had girls who quit volleyball and run cross country. They’ll say they wish they did cross country all four years. I’ve had kids who ran JV who continue to run. I love getting that out of kids.”

That is the same passion that pushed Merrifield all those years. It still does.

“It’s kids like him that makes coaching something that you want to do,” Merrifield said. “That’s the only reason I’m still coaching is kids like Diego.”

Because of that, Merrifield was overjoyed to see Hammett and his team win the state championship. And he said that has nothing to do with Hammett placing second at the state meet.

“I had a tough time getting him to come out, but he turned into a great coach,” Merrifield said. “He’s done a great job. I’m proud. If he was next to last at the state meet and turned out the way he did, I would have considered that a success.”