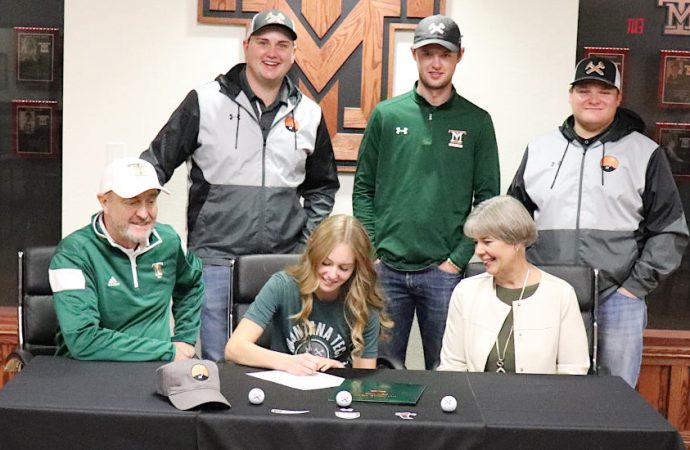 Sami Benson signs an NAIA Letter of Intent to play golf for Montana Tech between her parents, Peter and Lynn Benson, Saturday morning at the Montana Tech Hall of Fame Lounge. Standing behind her are, from left, Tech head coach Sean Ryan, her brother Sean Benson and Tech assistant coach Dylan Livingston.

She is Sean Benson’s younger sister, and there is no escaping that. That fact is especially true at Montana Tech, where her brother was the most impactful golfer in Oredigger history.

Surrounded by her family and some friends from the Mining City, Sami Benson signed to follow in her brother’s footsteps Saturday morning when she put her name on an NAIA Letter of Intent at the Hall of Fame Lounge.

“I never wanted to be like Sean,” Sami said. “I didn’t want to be known as Sean’s little sister, but now I’m going to be. Hopefully I can fit into Sean’s shoes.”

Trying to avoid the “little sister” label is part of the reason Benson never got into golf until she was entering in high school. She surprised her parents by letting them know she was going to try out for the team at Billings Senior, where her brother will forever be known as a state champion.

“I didn’t really pick it up until freshman year, like two weeks before tryouts,” Benson said. “I just really started picking it up and working hard for it.”

Despite that late start, Sami Benson will come to town as a two-time All-State player.

Benson qualified for the Senior varsity team as a sophomore and ended up placing 25th at the Class AA State tournament in Butte. A year later, Benson tied for seventh place at State in Great Falls.

Early last month in Missoula, Benson closed her prep career by tying for 15th at State in Missoula, helping the Broncs capture the third-place trophy.

Benson also arrives on campus with a reputation as a player willing to work hard, even in the offseason, to improve her game.

Saturday’s signing comes five years and eight months after the late Lee LaBreche convinced Sean Benson to play for Montana Tech instead of a handful of bigger school with better golfing climate.

LaBreche said the signing of the Class AA individual state champion would change Oredigger golf program forever, and he was right. Benson closed his career in April of 2019 with the school’s only Frontier Conference individual title, and other elite Montana golfers followed him to the school.

So, even after he graduated, Benson’s legacy is still working for the Orediggers. This fall, the Tech men won their first Frontier Conference regular-season title.

While it would not be fair to put that kind of pressure on the younger Benson to do the same, Ryan was every bit as excited to sign Sami Benson as his predecessor was to sign Sean.

“It’s a really good signing for us. It’s very exciting,” Ryan said. “It was a big focus, not just this year but last year. Signing the right high-quality players can make a big impact on the program, and this is one of them.”

The family ties are hard to ignore, but Ryan said he would have been thrilled to land Sami no matter her last name.

“She’s her own golfer,” Ryan said. “She’s got a chance to make her own mark on the women’s program, just like Sean did on the men’s program.” 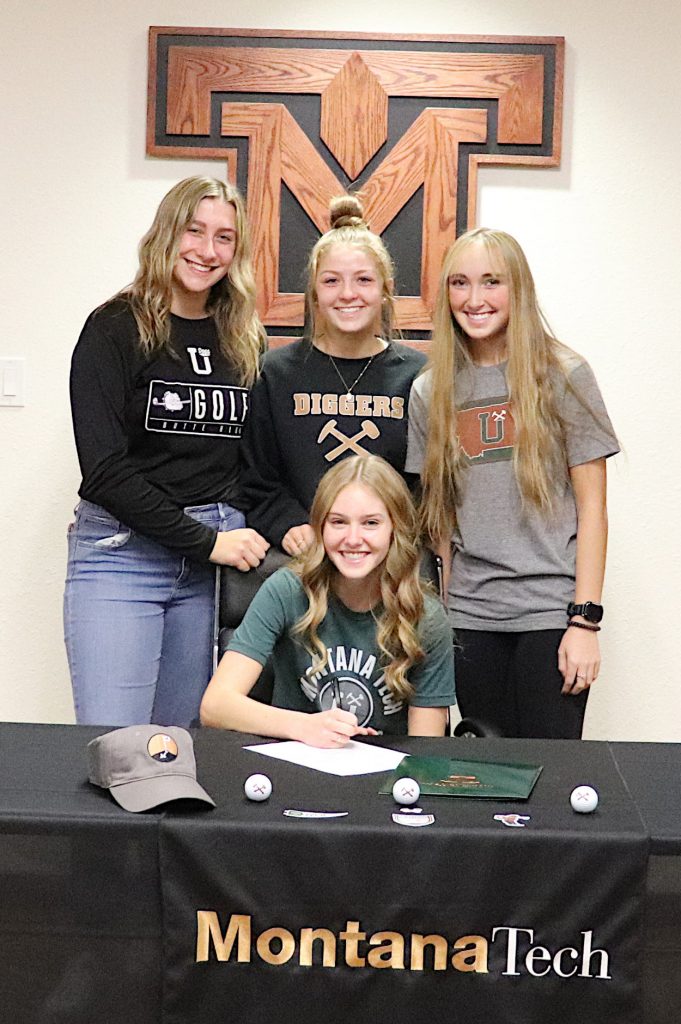 Sean Benson made the trip from Billings, where he is working as an engineer, with his parents, Peter and Lynn, to watch Sami sign. Recent Montana Tech signee Kennedy Lean was also there along with Butte High teammates Kodie Hoagland and Ella Prigge.

“They’re like my best friends on the golf course,” Sami Benson said of the Butte girls. “They’re super supportive.”

Sami Benson chose Montana Tech over MSU-Billings, saying her education was the No. 1 priority. The student with a 3.6 GPA is leaning toward a degree in occupation, safety and health. She is also looking forward to a successful career on the golf course.

Signing with the Orediggers is something Sami Benson felt like was inevitable.

“I feel like I always knew that I was probably going to sign here, just with my brother coming here. He loved it,” she said. “I really like it here. I love everything about Butte. It’s so cool.”

The signing of Sami Benson was the second big addition to the Oredigger golf program in as many days. On Friday, Ryan drove to Billings to sign Billings Central’ four-time All-State player Nick Pasquarello.

In addition to Lean on the women’s side, Ryan also recently inked Bozeman’s Franchi Ceartin. She tied for fifth at State last month as the Hawks won yet another state championship.

“This is one of those recruiting classes that I’m really excited about,” Ryan said. “Our boys’ program has been really successful off the foundation of what Lee did. I think the girls’ program is … now it’s their time to make their push.”