Senior Ryan Moodry is a ‘warrior’ for the Maroons

Like the nine other seniors on the Butte Central roster, Ryan Moodry will be playing his last home high school football game Friday night when the Maroons play host to Corvallis at Alumni Coliseum.

That is nothing new for Moodry, however. He’s been pretty much playing every game like it could be his last the past two seasons.

That’s because the Butte Central running back, linebacker, kicker and punter figured his career was over two years ago when he learned he broke two vertebra in his lower back.

“I thought I wasn’t going to be able to play a sport again when I thought they were broke,” Moodry said. “It’s just a blessing that I can still play.”

As a freshman, Moodry injured his back during a wrestling tournament. Despite the pain, Moodry continued to wrestle, qualifying for the state tournament.

He went on to play baseball for the Butte Miners in the spring and summer of 2015 before playing football for the Maroons as a sophomore in the fall. 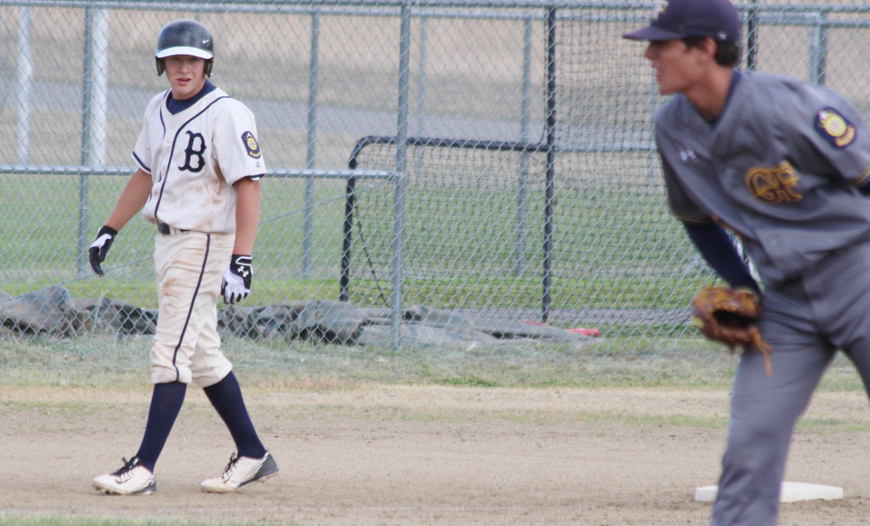 Ryan Moodry leads off third base for the Butte Miners in this July 17, 2015 game against Great Falls at Copper Mountain Park. (Butte Sports file photo)

“He really came on late in the season as a sophomore,” BC head football coach Don Peoples Jr. said. “He had some big games.”

The highlight of that season was probably when Moodry ran for a 25-yard touchdown to help the Maroons beat Hamilton 49-14 in the first round of the playoffs in his sophomore season.

The games and practices, though, took its toll on Moodry.

“Every night in practice he took extra time to stretch,” Peoples said. “He was stiff, and you could tell he wasn’t feeling good.”

Moodry figured he had a slipped disk as he played through what had to be unimaginable pain.

When he couldn’t wrestle because of the injury during the winter season, it was time to go to the doctor.

“After the game was probably the worst,” Moodry said of the suffering he endured to help the team.

So, Moodry went to Billings that February to have his back surgically repaired.

“They did a bone graft from my hip, then put screws and a rod in to hold it in place,” Moodry explained.

Moodry turned to the pool at the YMCA to work himself back in shape for the baseball season.

“The doctor wanted me to do my own physical therapy,” Moodry said. “He said you’ve got to just work yourself hard, which is good and bad. If you push yourself too hard it’s not good.”

So Moodry swam for an hour or an hour and a half every day after school.

He walked the fine line between pushing himself just enough and pushing too hard, cutting the recovery time from 6 months to 3 ½ months — in time for baseball season.

“I never really pushed myself too hard. I was pretty smart about it,” Moodry said. “That’s probably why I can still do everything.”

Moodry again started for the Miners, playing mostly third base and catcher that season.

Butte Miner Ryan Moodry is tagged out at home by Great Falls pitcher Alan LaRocque in the sixth inning of a June 24, 2017 doubleheader at 3 Legends Stadium. (Butte Sports file photo)

“I couldn’t swing like I used to,” he said batting in baseball. “I’m starting to get better.”

He played football, saying he was probably about 80 percent healthy.

That 80 percent was enough for Moodry to win post-season accolades in three positions for the Maroons. He took home All-State honors at linebacker. He was also a first-team all-conference selection at running back and punter.

Moodry was named second-team all-conference as a fullback.

This season, expect those post-season honors to be even better.

Through seven games, Moodry has racked up 753 yards on 148 carries. Those stats would be be even better, but he only played about half a game in each of BC’s first three games because they were blowout victories.

Over the past two games — when injuries hit the Maroons hard — Moodry put the team on his back, so to speak. Over those two games, Moodry carried the ball 69 times for 303 yards.

Last week he carried 31 times for 152 yards. Two weeks ago against Hamilton — when BC was without injured Clay Fisher and Cade Holter — he ran 38 times for 151 yards.

If 38 carries seems like it is old-school football, that is because it is.

Those 38 runs set the Butte Central single-game record for a game. The old mark was 36 by the great Brian Morris in 1981.

“He’s been a warrior for us all year,” Peoples said. “We put a lot on his shoulders with how young we are and our injury situation, and he’s carried us.”

The extra load is welcome to Moodry because he feels great. The back that bothered him so long is no longer an issue.

“It’s like a dream,” Moodry said. “It’s easy now. I don’t have to do all that extra stuff. It’s nice just being able to get up and walk perfectly. It’s feeling great now.”

As good as Moodry has been running the ball, he has been at least equally good defending it.

“He’s been a great middle linebacker for us,” Peoples said. “He makes all of the calls on defense. He’s really physical, and he’s always in the right place.”

Peoples said Moodry’s work ethic is second to none.

“He comes to work every night, he practices hard,” the coach said. “He’s got all you would want in a football player.”

The same could be said about Moodry the baseball player.

This past season he played all around the infield for the Miners. He was so good on the diamond that Moodry created a tough decision for himself as he looks to college.

He will likely have opportunities to play football or baseball at the next level.

Moodry probably won’t be able to wrestle again for the Maroons again this year. He will have to undergo another surgery to remove the hardware from his back after the football season is over.

Since his father, Robin, is the Butte Central head wrestling coach, Ryan will still be very close to the team and the sport he has competed in since “Day 1.”

Through it all, Moodry has also stayed pretty quiet and humble. The soft-spoken Maroon never brings up his injury.

“I don’t make any excuses,” Moodry said. “I don’t mention I broke my back unless confronted about it. I try to mention it as little as possible. I don’t bring it up unless I have to.”

Moodry is basically fitting in with a program mentality. He spoke after the Maroons had 12 players in uniform for practice for an 11-man game with a trip to the Class A playoffs on the line.

The rest of the players on the team were taking part in a sub-varsity game.

“It’s just a lot of hard work and a lot of mentality,” Moodry said. “You can do what you put your mind to.”

On Friday, BC fans will get one last shot to watch that mentality in play in a home game. Peoples will also take the time to enjoy seeing his warrior playing at full strength.