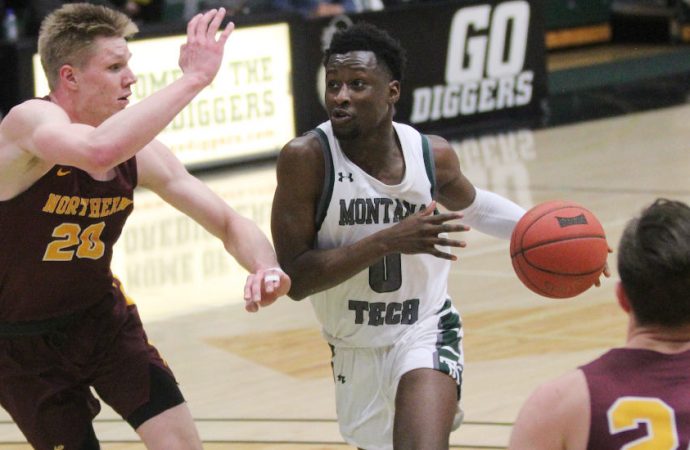 If there is such a thing as an innocent technical foul, we saw it Thursday night at the HPER Complex.

Montana Tech sophomore Drew Huse found himself on the wrong end of the “T” midway through the second half of a Frontier Conference battle with MSU-Northern at the HPER Complex.

Huse’s crime was staring at his brother, Lights senior Adam Huse, after what the younger Huse thought he blocked his brother’s shot.

Instead, Drew Huse was charged with a personal foul along with the quick technical.

Those free throws started a 19-2 Northern run that saw the Lights escape two with 63-56 win over the Orediggers. (Stats)

The win gives Northern the 2-1 series win over the Orediggers, and it gives the Lights an advantage over Tech in the race for a home playoff game.

And it all started with looked like, for a split second, a pretty good defensive play.

“He’s just looking at his brother. So what?” the coach said. “It’s just brother on brother. Good grief. He didn’t say anything. He just looked at him. So what? It’s his big brother.

“That one was kind of a momentum turner.” 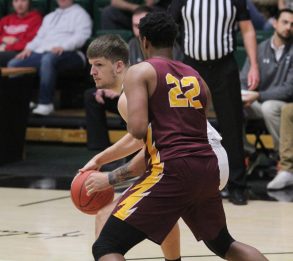 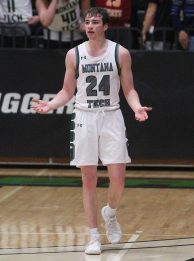 Oredigger Drew Huse reacts after receiving a technical foul and a personal foul on his brother Adam of MSU-Northern. (Bill Foley photo) 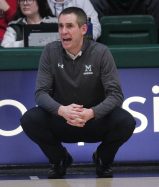 Tech coach Adam Hiatt voices his displeasure with a second half foul on his Orediggers. (Bill Foley photo) 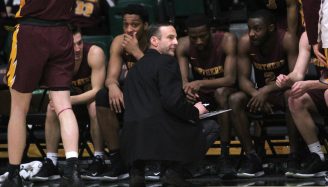 Northern coach Shawn Huse, a former Oredigger player and assistant, directs his team during a time out. (Bill Foley photo)

The lead change was the only one of the game.

The lead was 49-42 before Oredigger junior Sindou Diallo hit a pair of free throws with 5:21 left. The lead was 55-44 before Diallo drove for a one-handed dunk in traffic with 3:00 to play.

The Orediggers battled back to within four points when Cody Baumstrack scored on a putback with 32 seconds left, making it a 61-56 game.

The Lights, though, put the win to bed by making 3 of 4 shots from the free throw line in the final 22 seconds.

“It was a pretty big meltdown on our part,” Hiatt said. “We were 50 percent from free throws on our home floor and 2 of 14 from threes.”

The loss came after the Orediggers led by double digits for much of the game.

The Orediggers, though, could only muster seven more points over the next 12 minutes and change.

“We had a really good first half,” Hiatt said. “We played with a lot of energy and a ton of enthusiasm. In the second half, we didn’t have a lot of rhythm.

“We’ve been working hard on being looser and more aggressive on offense. It just hasn’t come to fruition just yet.”

Kavon Bey, who had a key bucket down the stretch, scored 15 points to lead the Lights in the win. Huse followed with 14 for Northern, while Devon Bray scored 13.

Diallo scored 24 points to lead the Orediggers, who had to play the last 6:58 without Taylor England. England, who was part of a rare double-foul call in the first half, fouled out on an offensive foul.

The team that places fourth will host a Frontier Conference playoff game. The fifth-place team has to hit the road.

Hiatt, though, is not worrying about that just yet.

“To be honest with you, I’m not even thinking about that right now,” he said. “We’re just hoping to get a win at some point. We’re just not playing the way that we need to play to be competitive in the league right now.

“We’re playing hard defensively, but offensively we need some guys to step up.”

The Orediggers host No. 11 University of Providence on Saturday. They then take on Carroll College at the HPER on Tuesday.

“We’re hoping we can bounce back. We’re in the midst of an incredibly tough stretch,” Hiatt said. “We’ve got to see if we can regroup and see what we can do on Saturday.”

The Lights will head to Lewiston, Idaho to take on Lewis-Clark State College on Saturday.