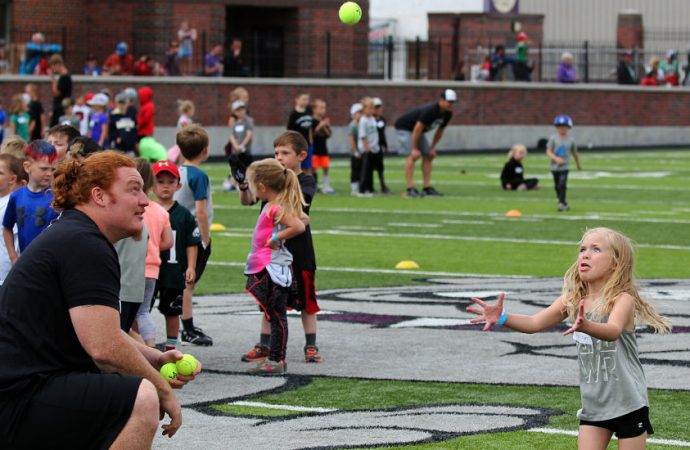 The “Charlie Award,” given out by Montana Tech to honor people who make a difference in the community, is measured in inches.

Both spoke volumes of the success of the two-day event that was highlighted by skills camp at Naranche Stadium.

Jensen is the starting center for the Tampa Bay Buccaneers. A little more than a year ago, Jensen signed a four-year, $42 million deal to take his talents from Baltimore to the Bay.

Friday morning on the turf of Naranche Stadium, Jensen was just one of the guys.

Jensen was one of the celebrity coaches for the skills camp that packed the field of Butte High’s storied stadium.

“This event is awesome,” Jensen said, pointing to the Thursday night gala, the Family Fun Day at the Butte Civic Center and the free music on Park Street Friday night. “It’s awesome to come support a small community like this.” 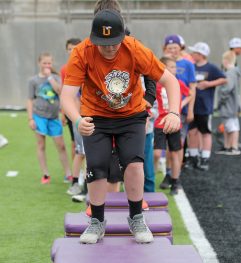 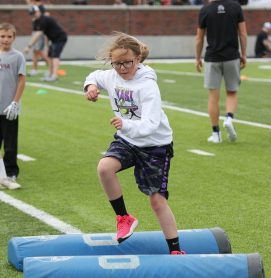 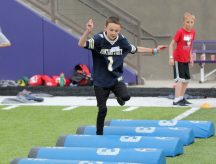 Monte, the University of Montana mascot, was a big hit. 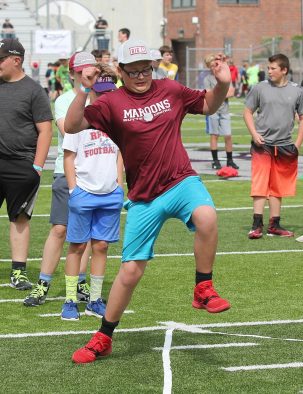 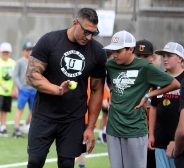 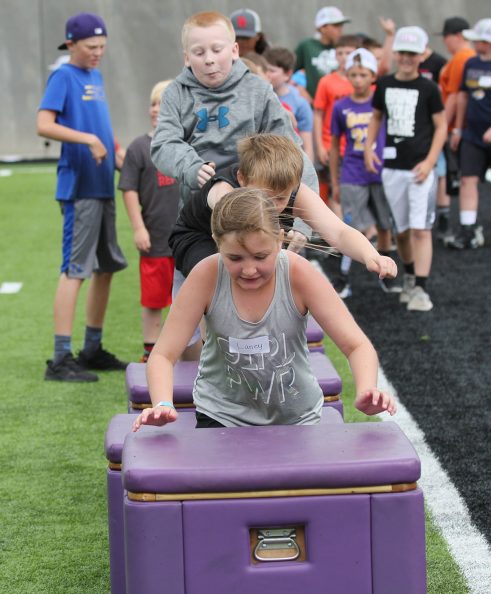 Like Buffalo Bills offensive tackle Conor McDermott and former NFL cornerback Sterling Moore, Jensen was back for the second time to help Anderson inspire boys and girls to “dream big.”

“It’s awesome to have the support,” Anderson said. “Ryan and Connor have been her two years. Sterling has been here two years.”

Later in the day, Charlie Oredigger and Monte the University of Montana mascot made appearances. Monte did some back flips and ran through some drills with the younger boys and girls.

“We understand kids’ attention kind of fades away at the end of camp,” Anderson said. “That kind of rejuvenated them.”

All of the celebrity coaches were there for the same reason — show the boys and girls that they can be anything they want to be when they grow up.

Jensen said that is why he was there.

“I wish growing up we would have had something like this,” Jensen said. “I think that’s part of the reason why I keep coming back. I want to give back and help these small communities.

“Really, we’re just normal people with really cool jobs. We have a great platform to come help these kids out.”

Former NFL player Joel Dreessen came from the same small Colorado town as Jensen, and the young Jensen paid attention when he saw the former Jet, Texan and Bronco.

“Watching him come back to town was a big deal,” Jensen said of Dreessen. “I’m not from here, but I know that playing in the NFL is inspiring. That’s what this thing is all about, to inspire them to dream big. They can do whatever they want.”

Anderson spent nine years in the NFL, making stops in Minnesota, Philadelphia, Indianapolis and Buffalo. Before that, he played for Butte High and walked onto the NFL.

He became successful on the football field because he was able to dream big, and he wants to pass that on to others.

This year, he hopes he got that message out to even more children. Last year’s skills camp drew about 300. This year the camp was free of charge, and it was much bigger.

Before heading to the Civic Center for the Family Fun Day, Anderson thanked the coaches and talked to the players.

That’s when Joe McClafferty made a surprise interruption. McClafferty is the president of the Montana Tech Foundation, and he presented Anderson and his wife Keelie with a “Charlie Award.”

The award goes to people who are “Charlie worthy.” McClafferty said the Andersons fit that description. Nobody young or old taking in Friday’s events were about to argue with that.

“That caught me by surprise,” Anderson said, holding the Oscaresque gold statue of the Oredigger mascot.

Anderson smiled ear to ear as he was caught off guard by the award presentation. To the former NFL player and the hero of so many, the “Charlie Award” was clearly a very big deal.