Along with fellow injured wrestler Kobe Moreno, Allen played the walkup music for the Bulldogs as they were individually introduced before each match.

Moreno and Allen smiled from ear to ear as they reveled in the role of DJ in the darkened Ross J. Richardson Gym.

It was a big day for Allen, who just had a cast cut off his leg. That leg was broken during the CMR Holiday Classic in Great Falls.

Nine days later, Allen traded in the music and made an improbable run to third place at 126 pounds at the Eastern AA Seeding tournament in Bozeman.

“I was just hoping I was going to make state,” Allen said. “I was coming back from not being able to condition like everyone else. So, I really surprised myself, especially when I beat a kid named Andrew Paradise (of Great Falls Russell). I haven’t wrestled him before this year, and he’s a pretty good wrestler. I ended up beating him and taking third.

Allen won his first two matches, which guaranteed him a place at state. For several reasons, including not wanting to push Allen on his first day back, Butte High head coach Cory Johnston decided to forfeit Allen out of his third match.

Allen then beat Paradise and Justen Unrein of Billings Senior to take third.

The forfeit was technically Allen’s third loss of the season, and he takes a 14-3 record into his second go round at state. Allen, who didn’t qualify at 113 pounds as a freshman, qualified at 126 but didn’t place last year. 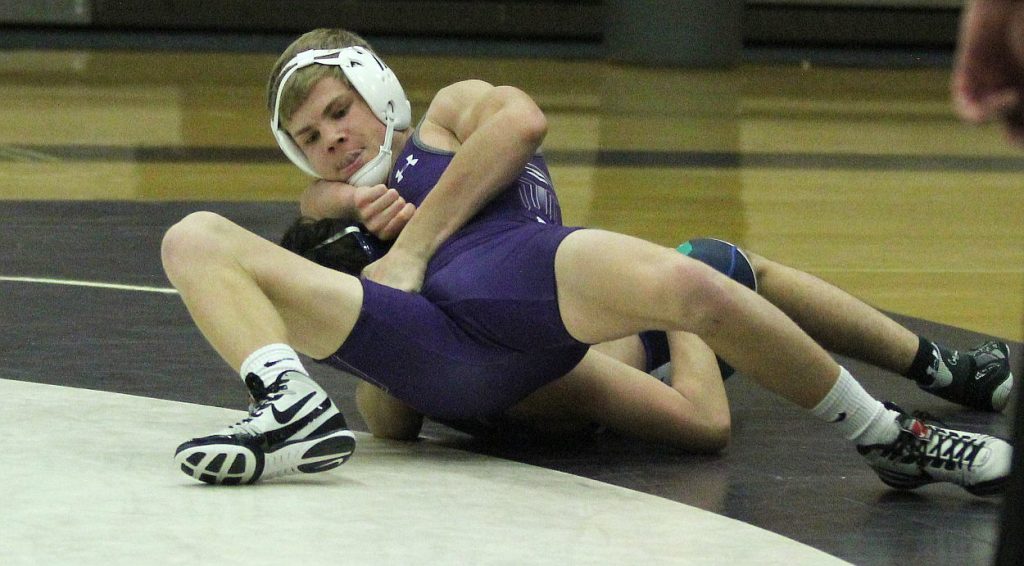 Butte’s Scout Allen closes in on a pin of Glacier’s Lane Wilson at 126 pounds in this Dec. 1, 2017 Butte Sports file photo.

Anything Allen does at the Metra will be hard to surpass what he did Dec. 14 at the Holiday Classic.

That’s when Allen put on a performance in which he could brag to Jack Youngblood about.

As he stepped backward in a quarterfinal match against Tyler Skinner of Great Falls High, Allen felt the tibia in one of his legs break.

“I knew it was broken,” Allen said. “When I planted back on it, I felt it slide and I heard it pop.”

Allen said he has a reputation as the boy who cried wolf when it comes to claiming broken bones to coaches.

“I lifted my foot up and grabbed it. I told the coaches it’s broke,” he said. “I always tell that to them. Every time something is hurt I tell them it is broke. They said, ‘Get back out there. This is a big match for you.’ As much as I didn’t want to, I went out there and wrestled.”

The break occurred at the end of the second period. Allen finished the match, pulled even and then went ahead for a 4-2 win over Skinner.

Yes, he won the match with the freshly broken leg.

The next day, though, Allen had to forfeit his semifinal match to Sterling Quinn, a 2018 state champion from Bozeman. Coincidentally, or maybe not coincidentally, Allen’s forfeit loss on Saturday was also to Quinn, a wrestler Allen figures to see at state.

The initial diagnosis in the days after the CMR Holiday Classic was that Allen could return to action in three weeks, and he eyed wrestling in the Jug Beck Rocky Mountain Classic in Missoula.

The second trip to the doctor, though, revealed a break all the way through the bone. Allen was fitted with a cast, and he was told his season was over.

“The team kind of got the news that he might not be back, and we didn’t have a very good week,” Johnston said. “Everybody was kind of somber with two of our best guys gone now.”

That other injured wrestler was Moreno, who blew out his knee in the first quarter of Butte High’s first football game.

In addition to watching his twin brother, Kameron, have a great season, Kobe Moreno worked closely with his friend Scout Allen.

When they weren’t playing songs for the healthy wrestlers, they were working out together in the weight room.

“I call him my trainer because I was lifting with him the whole time I had my leg broken,” Allen said of Kobe Moreno. “We would lift during practice.”

As the season went on, Allen insisted he would return to the mat for the seeding tournament.

When one doctor said “no,” he went out of town to a doctor who said “yes.” That doctor cleared him and removed the cast just in time to save Allen from doing the dirty work.

“If he didn’t clear me, my plan was to have my parents sign a release form and cut the cast off myself,” Allen said of his parents Russ and Camy. “I don’t know how that would have worked.”

With the cast removed, it was time for Allen to quickly get back in shape. The boy who starred at safety for the Bulldogs at about 145 pounds had to drop about 12 pounds to make weight at 126. 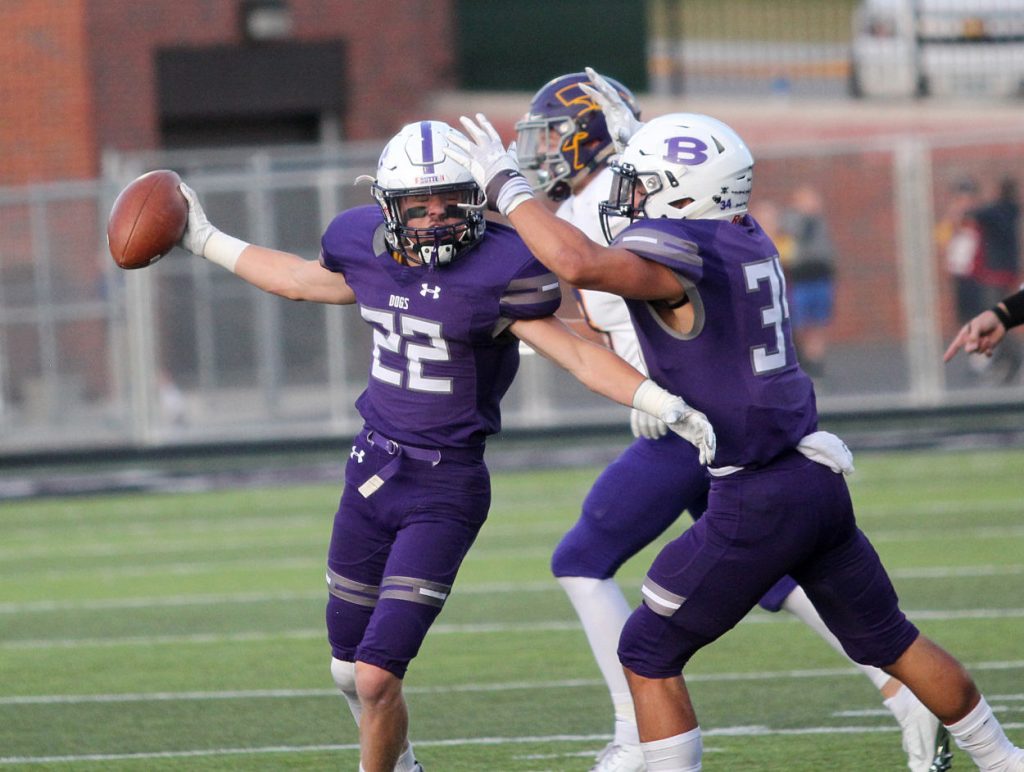 Johnston said Allen is better than ever.

“He became a student of the game sitting out and watching,” the coach said. “He’s better now than the day he went out. I wouldn’t want to wrestle him.”

Allen said he is much stronger now because of all the unplanned lifting.

“One of the kids I wrestled said, ‘Wow, you’re stronger than the last time I wrestled you,’ Allen said. “He whispered that while I was wrestling him. I knew I beat him when he said that.”

The leg is still bothering Allen. While his teammates ran at the end of practice Wednesday afternoon, Allen rode an exercise bike.

Allen has to tape up his formerly broken leg, and he didn’t tape his other leg as a decoy. (We still will not reveal which leg is injured.)

“I probably should so they don’t know which one to bend,” he said. “The doctor said I can’t wrestle if I don’t wrap it like that.”

If wrestlers did go after his leg in Bozeman, he was too busy wrestling and winning to notice.

“Not that I know of,” Allen said. “I wasn’t really think about it. I was just wrestling.”

As fate would have it, Allen’s second match of the Eastern AA Seeding tournament was Skinner.

“I said, ‘Gee, you beat him with one leg, man. You can’t lose to him with two legs,’ Johnston said. “So, he handled him and then he got on a little role. He looked good.”

Johnston said rest of the Bulldogs took notice of Allen’s remarkable run at the tournament.

On Friday morning, Allen will be one of 16 Bulldogs to don the purple singlet at the state meet at MetraPark Arena in Billings. He will open against Jackson Bakken of Missoula Sentinel.

He is four matches away from winning a state title.

“I’m really excited,” Allen said, turning the attention to his teammates. “The team needs to show up, and it’s going to be close. We need to get the points when it matters, get the pins when we’re able to and battle through the tough times. Anything can happen.”

If the Bulldogs do bring home their first state title in 16 years, they know they already have someone with experience to play music for the championship party.

“He was Click the DJ, and now he’s going for a state title,” Johnston said. “It could be a great story.”