Schulte one of four picked as captain of Dawgs 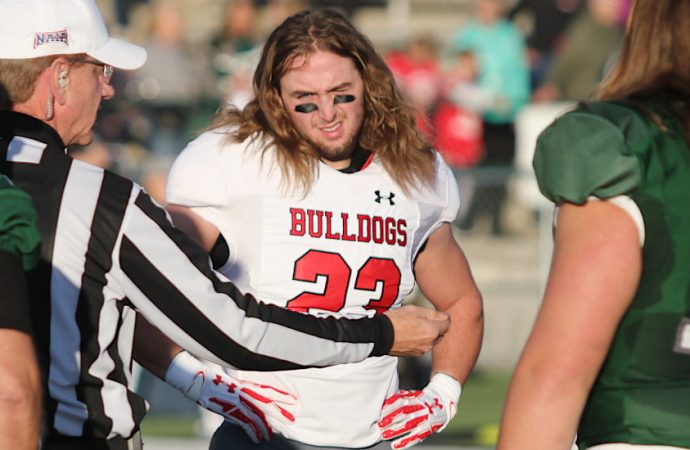 DILLON — Butte Central graduate Kyle Schulte will once again be a captain on the Montana Western football team in 2020.

He will join Noah Danielson, Tanner Harrell and Jon Jund as leaders of a Bulldog squad that is coming off a second-place showing in the Frontier Conference.

Western head coach Ryan Nourse said the coaching staff made the selections of captains this time around. Usually, the players vote for captains at the end of spring drills. The coronavirus pandemic changed that.

“With the off-season being cut down significantly and spring ball being canceled, we as a staff decided we would make the choices this year,” Nourse said. “We took into account many factors for this important role; including but not limited to overall leadership, performance, service, respect of staff and peers and a selfless team-first attitude.”

Schulte, who helped lead Butte Central to the Class A state championship game as a junior, will be a redshirt senior at linebacker this fall.

Last season, Schulte registered 46 tackles, four tackles for a loss, three sacks, a fumble recovery and a blocked punt on his way to second-team all-conference honors.

Schulte, who is majoring in secondary education with an emphasis on physical education and health, was also a captain in 2019.

Danielson, a redshirt junior left tackle from Vaughn, started every game for the Bulldogs last season. This will be his third year as team captain. He is majoring in health and human performance.

Harrell, a redshirt  sophomore defensive tackle from Shepherd, played nine games last season. He recorded 35 tackles, 10.5 tackles for a loss and six sacks. He is majoring in physical education.

Jund, who is from Spring Creek, Nevada, will be a redshirt junior quarterback. Last season, the kinesiology major threw for more than 2,700 yards and 31 touchdowns. He also ran for 365 yards and eight scores on his way to second-team all-conference honors.

Nourse said the captains were chosen from a strong pool.

“The staff discussions were awesome,” the coach said. “We have so many outstanding leaders on our team there were a ton of nominations. I think the four that emerged on top and were chosen as our 2020 captains are all excellent leaders and representatives of Bulldog football. They produce on the field, in the classroom and are selfless leaders dedicated to the success of the team first and foremost.”

Fall practice is scheduled to start in early in August. The Bulldogs, who are looking to build on last year’s 7-3 record, are set to open the season Aug. 29 against Carroll College in Helena.