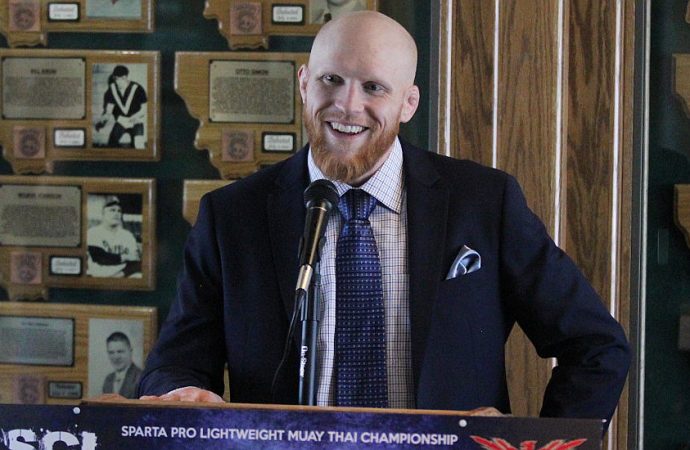 Butte fighter Sam Rauch talks about his April 21 Butte Civic Center at a press conference in the lobby of the arena Friday afternoon. (Bill Foley photos)

Not for this paycheck, but for the future ones and the chance to accompany the rise of Sparta that apparently inspires Butte fighter Sam Rauch to headline a marquee event in his hometown’s Civic Center next week.

“All purses our confidential with our fighters,” promoter Bryan Deats affirmed Friday at a press conference for the 14-bout mixed martial arts card Rauch’s bout is to top.

The answer sparked a response from Rauch, owner of the Grit martial arts training center, that “the King of Sparta purse, $10,000, is the real purse I’m looking for. Jeff (Cisneros) knows I’m going to win it.”

Cisneros, owner/promoter of the Sparta combat sports league, has the big-time King of Sparta card on the fight fans’ menu for a June 30 serving in Denver. Rauch is seeded third at 155 pounds.

“I like your confidence, man,” Cisneros said via computer video conference. 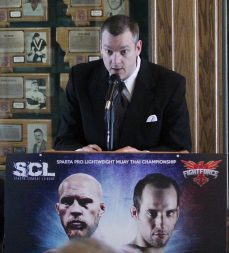 Butte fighter Sam Rauch talks about his April 21 Butte Civic Center at a press conference in the lobby of the arena April 13. (Bill Foley photo)

First, though, is the matter of April 21. This is not a competition Rauch is looking past, but more one he sees as a step in purpose to keep tuned, keep alert, keep in shape and awaken all reminders of what his sport entails.

Deats and Cisneros have him matched against Kolton Menzak of Lethbridge, Alberta, with the Sparta World Muay Thai championship on the line.

“Kolton Menzak is a tough kid,” Rauch said. “He’s about 6-foot-1 and he’s never shown up and not competed. He is a skilled fighter. He’s fought for a major Canadian title and he’s confident he can beat me.

“But, I truly believe I’m at a higher level.”

The Civic Center card will feature mixed martial arts, Muay Thai and boxing matches with the Rauch-Menzak main event marking the first world Muay Thai title to be contested in Montana, promoters said in a handout. Menzak is one of five Lethbridge Canadians slated to oppose U.S. fighters in the show.

The endeavor links the Deats ventures with the Sparta Combat League in a new association.

“Sparta Combat League is an international organization with a wide reach to (the United States) and abroad,” the release said. “This gives Montana fighters opportunities that were not easily accessible to them in the past.”

The promoters said the card was likely first ticketed for larger fight venues such as Denver, Las Vegas or Spokane before Rauch became more personally involved in the promotion and scheduling. A different slant on the thinking with a more grass-roots consideration changed the list to Billings, Missoula or Butte, when Rauch got his way and parked the event in the Civic Center.

“Butte likes fights,” Bill Fisher, a Butte businessman and a co-organizer for the card, said about the selling point.

The card will have a heavy Southwestern Montana flavor with Rauch joined by fellow Butte athletes Jeremy Darr, Shawn Hardy, Brandon Brisbo, Kadin LeCoure, Andrew Huckeby and Wes Ogan, and Anacondans Chris LaTray and Eric Hempstead. They will be fighting combatants from other parts.

Sherdog.com lists Menzak’s record at 5-4-1 going into the fight with Rauch listed at 6-3-1. The ledgers could be a little off. Rauch began his career with eight straight wins. The different disciplines the martial artists vie in likely muddle the record keeping around the globe.

“In 2006, I had my first UFC match in the Civic Center a month out of the army,” said Rauch, a veteran of tours in Afghanistan and Iraq. “I trained with John Amtmann (in Butte) and then spent a year and a half training all over Montana, getting the best training from the best people I could find.”

Rauch said his training travels took him to Bozeman, Anaconda (with Chris Eamon), Helena, Billings, etc. The training must have been pretty darned good.

“I found myself 8-and-0 and out of competition in this region,” Rauch said.

Needing to move to improve, the Butte native took up residence in Colorado. He fought on cards in Denver and Las Vegas, and, after a six-year stay, loaded up his vehicle to return home in 2009.

He has credited Butte support with keeping his fight furnace stoked. This explosiveness of his combat professionalism belies what seems to be a gentle soul. To view Rauch teaching children in his classes is to see one who seems to enjoy sharing his knowledge with kids, genuinely. The smile is real and if a youngster is not involved or not seeming to like the exercise of the moment, Rauch searches, successfully, for the avenue to relate.

Rauch deflected the credit to his wife, Brittany, and said she is of great help in the business and family scheduling during times he is immersed in bout preparation.

“Professional athletes are the most selfish people in the world,” he said.

Rauch said the pre-sale for tickets is the highest he’s seen for a combat sport card at the Civic Center and added he’s “tracking 5,000” for an attendance number. Deats said only 10 tables remain on the floor for sale and Fisher said that “I’ve been involved in a lot of events and I can feel the hype building for this event.”

“It could have easily gone to Missoula or Billings or Butte,” Fisher said. “But, there’s a reason Butte is No. 1 on the license plate.”

Ticket pre-sales have traditionally been slow for any event in Butte, which is known by promoters and organizers as a walk-up town — most tickets being sold at the gate the day of the event rather than in advance.

Cisnero said the goal of Sparta is to become the top combat sports league in the world and said it has grown from a couple shows in Colorado a year to a company that will promote this year, nine years later, 42 all over the country as well as fight dates in Portugal and Ireland.

Tickets for the Butte card are available at the Vu Villa, Grit, The Depot, Civic Center and fightforce.com. The bouts are set to begin at 7 p.m. on April 21 and the tentative lineup follows: