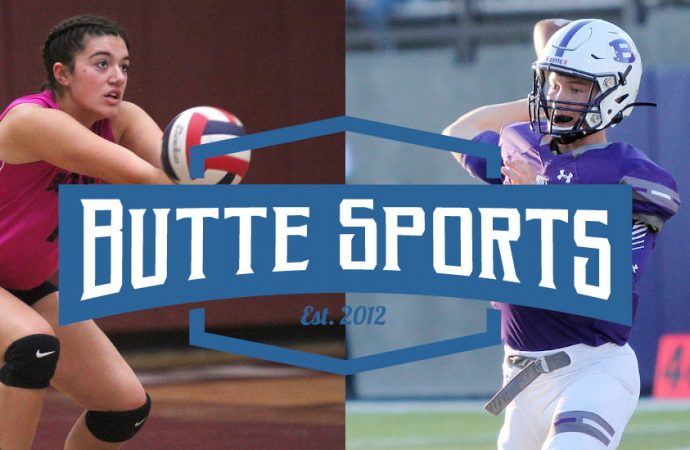 This week, we shine the spotlight on Cassidy Strizic of Butte Central and Tommy Mellott of Butte High. Both players were key contributors for their school teams since their freshman seasons.

Butte Central’s Cassidy Strizic hits a deep fly ball to center field against Dillon May 4, 2019 at Stodden Park. The BC junior homered on her previous at bat. (Butte Sports file photo)

She left her biggest mark on the volleyball court. As a senior, the hard-thumping outside hitter helped lead the Maroons to the Class A State volleyball tournament for the first time in four years.

On the softball field, Strizic was a valuable and versatile piece for coach Kelci Thatcher’s Maroons. She could play center field one game and then catch the next. She also provided a big bat in the heart of the BC lineup.

Strizic contributed on the varsity level for the Maroons early in her career. She started as a sophomore on BC’s Western A Divisional championship team.

However, Strizic gave up hoops before her junior season to focus more on her other sports.

Butte High: Tommy Mellott
Mellott will go down as one of the greatest Bulldogs in history. With a letter in track this spring, he becomes the first Butte High boy to earn 12 varsity letters in his career.

Mellott lettered four years in track, basketball and, of course, football. He was a top-tier track athlete who was looking to compete for state titles before the spring season was called off.

In basketball, Mellott emerged as a defensive force from Day 1. As a senior, he was a key piece of the puzzle as the Bulldogs qualified for the Class AA State tournament for the first time in seven years.

It is football, however, where Mellott became a legend.

Mellott started at quarterback for three seasons for the Bulldogs. He led Butte High to an 11-1 record and an appearance in the Class AA state championship game as a senior. For his efforts, Mellott was named Class AA Offensive MVP and the Gatorade Montana Football Player of the Year.

A three-time All-State selection, Mellott finished his career with 7,542 passing yards and accounted for 102 total touchdowns. Rushing and passing, he put up 46 TDs as a senior.

The future Montana State Bobcat will leave Butte High as the Bulldogs all-time leading rusher with 2,568 yards. He is one of just three Bulldogs to rush for more than 2,000 yards in their career. Jay LeProwse (2,286) and Kameron Moreno (2,006) are the others.

A recipient of the 2020 Mariah Day McCarthy Scholarship, Mellott is also a valedictorian of the Class of 2020.