The COVID-19 pandemic, however, is preventing the Class of 2020 from ending their high school careers in the celebrated style that they deserve. The spring season is completely wiped out.

This week, we shine the spotlight on Kameron and Kobe Moreno of Butte High and Jared and Matt Simkins of Butte Central. These Butte brothers had their opponents seeing double for the past four years.

Kameron and Kobe Moreno
The Moreno brothers brought talent, toughness and fun in three sports for the Bulldogs, standing out in football, wrestling and track.

The brothers were part of the heart and soul of the Butte High football team’s run to the championship game in 2019.

Kameron Moreno rushed for 1,307 yards, which was god for second on Butte High’s all-time single-season rushing list. His 20 touchdowns tied for the most in a single season at Butte High.

Kobe Moreno returned from a torn ACL that robbed him of all but a few plays during his junior season to be a force for the Bulldog defense at linebacker. He also scored a handful of touchdowns while wearing a bulky knee brace. That includes two touchdowns in the championship game.

Kameron won the Class AA state wrestling title at 205 pounds as a junior. He placed fourth in that weight class as a junior. Despite being significantly undersized for the weight class, Kobe placed third at heavyweight as a senior.

The Moreno brothers announced in January that they will take their talents to the Montana Tech football team. The brothers were the first two players to sign with new Oredigger coach Kyle Samson.

“I’ve had the chance to get to know these guys the last couple of years. In my opinion there as tough as they come,” Samson said. “They’re great competitors. They’ve been very successful in multiple sports. That’s one thing we’re looking for is guys that compete in multiple sports and are successful.”

Jared and Matt Simkins
For three and a half years, Butte Central coaches wondered what would happen if they got both Simkins brothers playing health at the same time.

The answer to that was the Maroons would win a state title.

After battling a rash of wounds that ranged from fluke toe injury to back problems to concussions in football and basketball, the Simkins brothers were finally both health down the stretch of the basketball season.

Key defensive plays by Matt Simkins in a loser-out game against Hamilton in the divisional tournament helped send the Maroons to state. Defensive smarts by both brothers keyed victories over Billings Central and Browning at the Class A State tournament in Billings.

“Those two were so good today,” BC coach Brodie Kelly said, pointing to the twins’ toughness, smarts and effort level, after the tournament-opening win over Billing Central. “The things that people don’t see is all the bailing out they do. The being in the right spot, helping each other has just been awesome.” 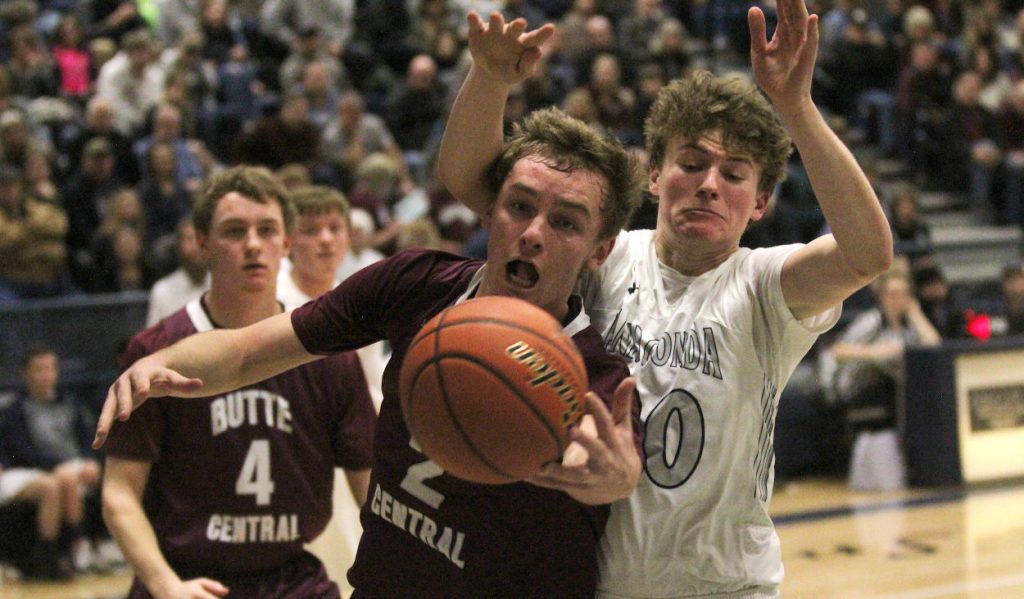 Matt Simkins had the play that will be remembered for decades when he surprised even himself by going up for a one-handed dunk in traffic late in the third quarter of the semifinal win over Browning.

While BC fans chanted his name, Jared said he was not the best Simkins on the court that night.

“I thought he played a lot better than me,” Jared said of his brother with a humble smile. “I just had the one play.”

Matt will play football at the University of Montana. Jared has turned down several offers to play in college. So far.