Saints at Nelson Stadium next up for Orediggers 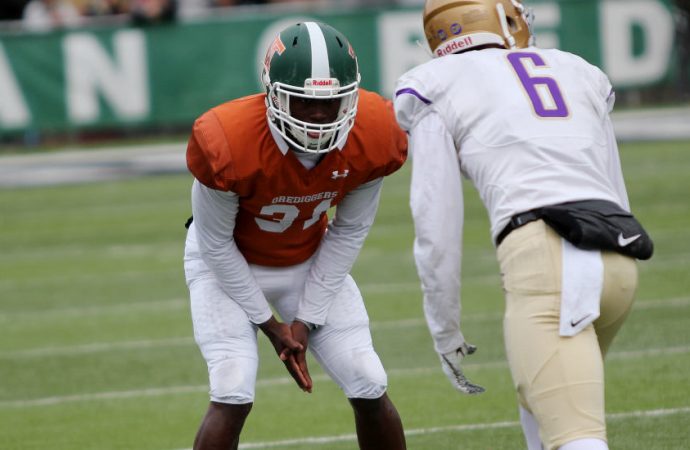 Two old rivals who have a ton to play for Saturday will meet when Montana Tech heads to Nelson Stadium in Helena to take on Carroll College.

Montana Tech needs a win to keep its hopes of playing in the NAIA football playoffs alive. The Saints need a win to pull even with the Orediggers this late in the season for the first time since 2014.

Suddenly, a rivalry that might have lost a little of its luster over the past few years, is once again a huge showdown.

“There’s a lot at stake this week,” Tech coach Chuck Morrell said. “We have to do our best to play mistake-free football, be physical and do the things that have made us successful this year.”

Under first-year head coach Troy Purcell, the Saints enter the game at 5-3, winners of three straight.

The Orediggers are 6-2 with both losses coming to undefeated College of Idaho, including one on a 58-yard field goal as time expired.

A loss would spell doom for the Orediggers’ playoff hopes. A win could mean everything for a Carroll program looking to resurface as a Frontier and national power.

Morrell said it is just another week in the brutal Frontier Conference, where every week has been rivalry week.

“We have a lot of big weeks, but this is certainly right at the top,” Morrell said. “In our league right now, there’s a lot of huge rivalry games. Our guys thrive in that environment of playing in a rivalry game nearly every week.”

After last week’s 28-14 win at Southern Oregon, Morrell said his team, which is largely a very young unit, is at its best in big situations.

“Our guys certainly have that road warrior mentality,” Morrell said. “It doesn’t matter where we play or when we play, our guys are game for anything. Our guys are very resilient. We’ve got some great leadership with some great fifth-year guys. I’m really proud of them.”

After starting at 2-3, the Saints knocked off Montana Western in Helena before going on the road for easy wins over Rocky Mountain College and MSU-Northern.

Freshman Matthew Burgess has racked up 851 yards and 14 touchdowns on the ground this season. Senior Major Ali has added 503 yards and four scores.

As a team, the Saints lead the league with a plus-12 turnover margin. Tech and Montana Western are tied for second in the Frontier with nine. Carroll has committed just five turnovers on the season.

“They’re not making mistakes,” Morrell said. “They’re keeping themselves in the game all the time.”

If the Oredigger defense, the top scoring and overall defense in the Frontier, has had one weakness this season, it has been producing turnovers.

Last week, Tech seemed to remedy that when Justin May, Jacob Clarke and Tucker Rauthe picked off passes. Ike Schweikert forced a fumble that was recovered by Arthur Flynn.

With sophomore quarterback Jet Campbell, a converted receiver, running the show, keeping the football has been a strong suit for the Orediggers.

Like Bridgewater, Campbell’s numbers do not jump off the state sheet. His results, though, have.

“He’s one of the most competitive guys we have on the team,” Morrell said. “It’s really hard to throw him off. If he makes a mistake, he bounces right back. He’s done a great job taking care of the football. He’s made some big throws down the field.”

With senior Jed Fike out with a season-ending injury, sophomore Tyler Folkes and true freshman Blake Counts have been more than solid.

Counts has a 700 yards and seven touchdowns on the season. Folkes has run for 526.

Those yards have come behind an offensive line that has become a major strength. Seniors Grant Benz and Hayden Smith and sophomores Hunter Spartz, Trey Copeland and Tristan Stauffer had paved the way for that ground game along with tight ends Nate Sander, a junior, and Jaylen Taggert and Kenny Lafayette, who are sophomores.

Carroll’s defense has been playing strong, especially in the wins over Rocky and Northern. Junior linebacker Nate McGree, a Butte Central graduate, is ranked No. 3 in tackles for the Saints. He has six and a half tackles for a loss, a sack, an interception and a fumble return.

The Orediggers will close the regular season at home next week against Rocky. Carroll will head to Eastern Oregon.

Other Frontier games Saturday, Montana Western heads to the College of Idaho, Southern Oregon travels to MSU-Northern, and Eastern Oregon plays at Rocky.