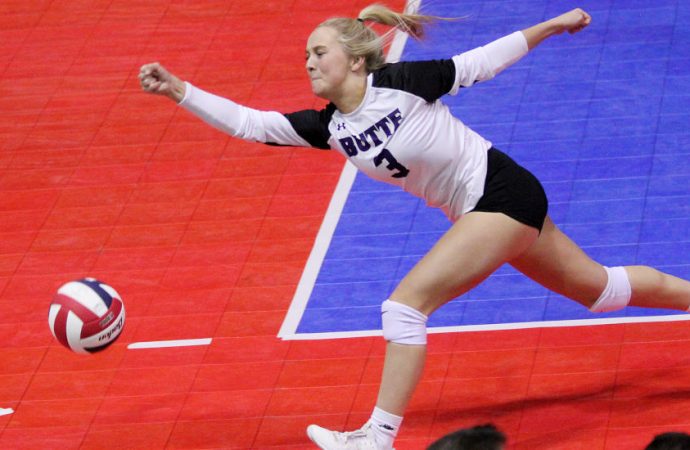 Butte High suffered a rash of errors in its first set and didn’t recover in time to prevent a 25-9, 25-17, 25-22 sweep at the hands of Great Falls’ C.M. Russell High School. The Bulldog loss came in the first round of the tourney being played through Saturday at the Brick Breeden Fieldhouse on the Montana State University campus in Bozeman. The loss knocked the Bulldogs into the Friday, noon loser-out match against Helena High, which lost a five-setter to Billings Senior later Thursday afternoon. (Bracket)


“That was definitely not our A game,” Butte High head coach Jeni Hope said. “Finally, in the third set, we started to come around.”

The afternoon appearance was the Bulldogs’ first in a state volleyball tournament since 2013.

“It was the jitters of being here, I think,” Hope said. “We got off to a bad start. We made 10 hitting errors in the first set and five of them were doubles (double hits). But I think it wash mostly jitters at the start, walking in here and it’s like “here we are” and “we made it,” but you have to get over it.”

Another problem the Butte High girls couldn’t get over was 6-foot-3 Russell standout Allie Olson, who signed with Utah on Wednesday to continue her volleyball career as a Pacific 12 Conference college after finishing her CMR senior year next spring. Olsen walloped 18 kills and posted six blocks in a starring performance.

The Rustlers were so dominant early, Butte High did not gain a lead until the third set.

Russell scored the first four points of the match as the Bulldogs committed three errors on a double-hit, a hit into the net and a bump from CMR the Bulldogs let drop unchallenged on their side of the net, the result of a communication mixup.

The Rustlers built on the lead and had a 9-3 advantage when Olsen toed the line and served a seven-point run. Six of the points were scored on Butte High errors, four on shots plastered beyond the end line as the Bulldogs had trouble zeroing in on the court.

The tournament is being played along with the Class A, Class B and Class C state tournaments on sportscourts spread over the fieldhouse floor.

Russell reached set point at 24-9 on an ace by Norah Allen, then won the set when a Bulldog tip missed wide of the net antenna.

Butte High regrouped and played much better in the second game. Bulldog senior setter Sydney Doyle scored twice, on a dig that cleared the net and found floor, and on an ace serve, to tie the score at 6-all. The Bulldogs couldn’t take the lead, however, Natalie Bosley scored for CMR on a stuff block to break the tie and then Allison Will aced a serve. The Rustlers were ahead for good in the set. Later, a Butte High serve missed long and Russell owned set point at 24-16. After Brooke McGrath pounded a kill for the Bulldogs, a Butte High serve soared over the end line and CMR had a 2-0 lead in games.

The jitters seemed to finally evaporate for Butte High in the third set. The Bulldogs grabbed their first lead of the match when the Rustlers were cited for a rotation violation, breaking a 3-all tie. CMR broke out to a 12-8 advantage, but the Bulldogs growled back. The Rustlers committed two errors and then Hannah Morin-Ferguson belted a kill for Butte High, followed by a block from Emma Field and the score was knotted at 12-all.

A bump by libero Trisha Ericson evaded the Russell defense and the Bulldogs had a one-point edge again. A service error retied the score and then the Rustlers took over for good when Olsen mashed a kill. They maintained the lead and held a 24-20 margin at match point on a Bulldog miscued spike. Butte High stayed alive on a tip by Ally Mueller and on a kill by Brooke McGrath. However, the Bulldogs were caught in a rotation violation and the match ended on the point.

Though Butte High self-destructed at the match onset, it regained its poise and showed toughness in battling CMR, loser of only one match this season, the latter part of the match. Hope liked the finish, if not the result. The Eastern A champion Rustlers are 24-1 this season and Butte High has a 13-10 record.

“We can still be there,” she said about the prospects of winning the championship or a place-winning in the double-elimination tournament. “We just have a lot more games to play now. We need to stay positive, re-focus and come out better tomorrow than we did in the first match.

The Bulldogs finished the regular season strong and won their playoff over Kalispell Glacier for the spot in the state tournament. So, Hope said, she expects the more confident Butte High team to show up for the second day of the tourney.

Allen served three aces and Russell also got 24 assists from Tennisen Hiller and 26 digs from Lauren Lindseth to back Olsen’s performance.