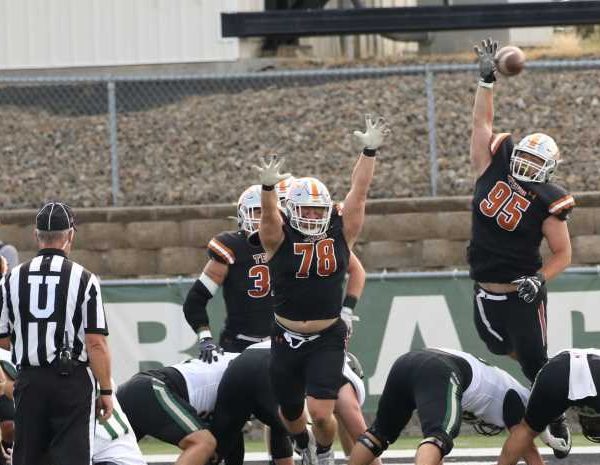 The Bears grabbed three Montana Tech fumbles stole two Oredigger passes and turned away a fierce charge at the end to put up the victory in front of 3,162 counted spectators.

Rocky Mountain senior quarterback Nathan Dick ran for two touchdowns and passed for one. He gained 67 yards on runs and passed for 148 but left the field after the game on a cart after having suffered a possible knee injury late in the game when the Bears were trying to run out the clock with the lead.

Senior quarterback Jet Campbell of the No. 21-ranked Orediggers led the late comeback as he and running back Blake Counts both broke off long gainers. The drive included a 12-yard carry by Counts, an 18-yard pass to Kyle Torgerson from Campbell, and then a 26-yard dash by Campbell to the Rocky Mountain 26-yard line with less than a minute left in the game.

However, the Bears’ Jack Cline dove across the hash marks in front of the end zone to come up with a pass interception at the 4-yard line to kill the Oredigger drive and preserve the 28-20 Rocky Mountain win.

It was the final of five Montana Tech turnovers that bogged the Orediggers down in their attempts to win the game.

“I thought our guys played really well and really, really hard,” Montana Tech head coach Kyle Samson said. “Rocky is a very good football team and you can’t give good football teams extra opportunities. We made mistakes we hadn’t been making this year and we’ll have to take a look at them and see what we can fix.”

The coach accentuated the positive, pointing at the Orediggers’ persistence in trying to win the game after falling behind early. The comeback was almost a game-long endeavor.

“We were down 15 points with four minutes to go,” he noted. “Our guys fought to the very end. We went down and scored, got the ball back and didn’t give up.

“I can’t question the guys’ desire and heart. They played super hard.”

Dick’s 4-yard touchdown carry into the line on the first play of the fourth quarter gave the Bears their two-touchdown advantage, 28-13.

Bad weather began floating into the stadium and plopped down sparse hail with a bit of rain accompanying a noticeable drop in the temperature.

The Orediggers reached the Bears’ 34-yard line on a drive before it was stopped by Shamar Whestone. Montana Tech forced a punt, but a roughing-the-kicker call kept the ball in Rocky Mountain’s possession with 15 yards added to its march. So, the Oredigger defense dug in while Dick and Co. were trying to run the clock out on Montana Tech, and caused the Bears to punt again.

The Orediggers started on their own 20-yard line and kept the scoring threat alive when Campbell scrambled for 11 yards on third-and-10 to his own 31-yard line. The quarterback then connected with Trevor Hoffman for a 9-yard pass and with Wyatt Alexander for 39 yards to the Bears’ 21-yard line. Campbell kept for another 15 yards, then found Counts on a short pass that the back lugged into the end zone through defenders. Rocky Mountain’s lead was trimmed to 28-20 with 2 minutes, 11 seconds on the clock.

The Orediggers limited the Bears to a three-and-out, which began the last Montana Tech drive Cline stopped with his pick near the goal line.

“We’ll look at the film and see what we need to do,” Samson said. “I have to see what we did well because I thought we did a pretty good job. We did have some penalties that helped to beat us and we can’t beat ourselves.”

The turnovers and penalties put the Orediggers in stalls and in holes that forced changes in a gameplan, taking the team out of what it wanted to do and “not running what we wanted,” the coach noted.

The Bears jumped ahead early in the first quarter with a 27-yard field goal by Austin Drake, followed by the Orediggers’ first critical turnover for the day – a fumble Rocky Mountain’s Prince Johnson picked up and ran back 28 yards to the end zone.

Ryan Lowry booted a 25-yard field goal for the Orediggers, who trailed 9-3 at the end of the quarter.

The difference was 15-13 at halftime. The Bears had widened the gap to 15-3 on a 17-yard swing pass from Dick to Zaire Wilcox. The Orediggers blocked Rocky Mountain’s first two extra point kicks.

Montana Tech rallied from the 15-3 deficit with a 1-yard TD sneak by Campbell and a 42-yard field goal by Lowry just before halftime.

Dick doused the Orediggers’ momentum gained by the second-half rally with a drive after the Bears’ Wyatt Brusven recovered a Montana Tech fumble at the Oredigger 26. Incrementally, the Bears drove to the 1 and Dick crashed into the end zone. Rocky Mountain led 21-13, then scored on the first play of the fourth quarter on Dick’s 4-yarder, setting the scene for the rest of the game.

Trae Henry led the Bears’ receiving with four catches for 43, Wilcox had four for 40 and Montana Tech grad transfer Andrew Simon of Whitehall caught for balls for 37, including a spectacular one-handed grab in the middle of the field.

Campbell completed 19 of 37 passes for 207 yards. He also ran for 94 yards, and Counts carried 15 times for 85. Hoffman led the Orediggers in receiving with seven catches for 63 yards. Alexander had three receptions for 59 yards, and Torgerson six for 54.

Defensive back Brail Lipford led Rocky Mountain in tackles with nine before being shaken up late in the game. Nolan McCafferty had eight tackles, six of them solos.

Both teams are now 2-1 for the season. The Orediggers will play at Montana Western next Saturday.

The kickoff is scheduled for 1 p.m. in Dillon. Rocky Mountain will be celebrating homecoming with a game against Montana State-Northern. 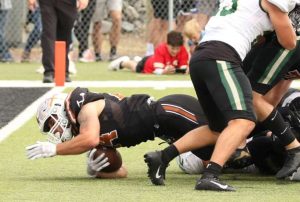 Blake Counts pushes to the endzone 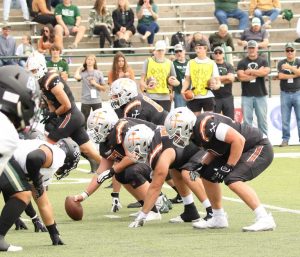 Digger O-Line in the red zone 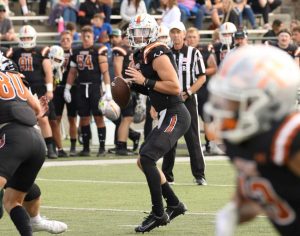 Jet Campbell looks for his receiver